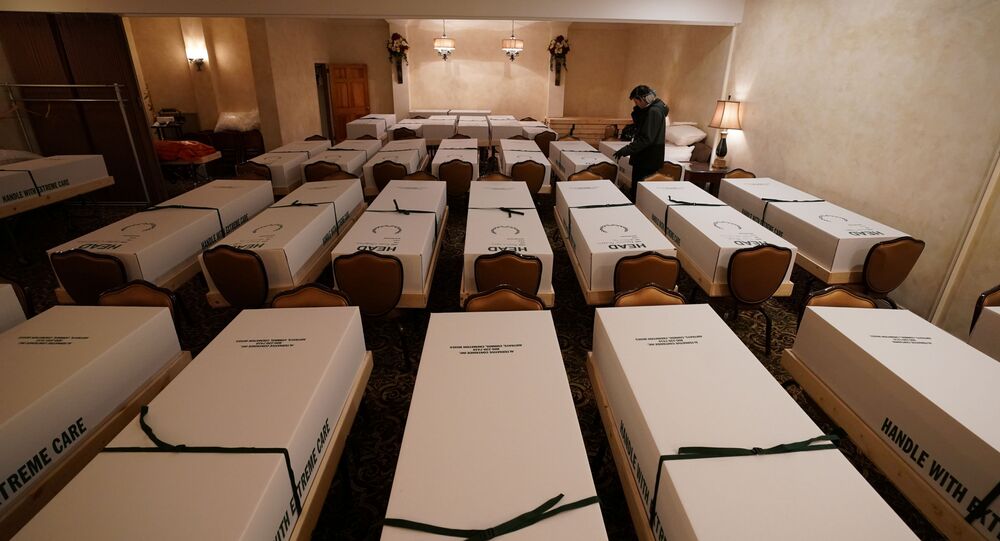 Despite once predicting the COVID-19 novel coronavirus would be a nonissue for Americans, US President Donald Trump appears to now be relying on worst-case scenario death estimates when framing the federal government’s response to the pandemic.

Trump, addressing those in attendance for a presidential recognition ceremony in the White House Blue Room on Friday, applauded himself and the administration for saving “hundreds of thousands of lives” in the US through federally-issued orders and guidance.

“People were thinking in terms of 1.5 million lives lost to 2.2 [million lives lost] without the mitigation, and hopefully we’re going to come in below that 100,000 lives lost - which is a horrible number, nevertheless,” Trump said during the celebratory “Hard Work, Heroism, and Hope” event, referring to projections released over a month ago by the White House.

As of Friday, the US had logged over 64,600 deaths from COVID-19 and 1,098,565 confirmed cases of the contagious disease. More than 6,551,810 novel coronavirus tests have been performed in the country, and 164,015 recoveries from the virus were reported, according to data from the Johns Hopkins University COVID-19 dashboard.

Dr. Anthony Fauci, director of the National Institute of Allergy and Infectious Diseases and primary medical spokesperson for the Coronavirus Task Force, has acknowledged the possibility of 100,000 to 200,000 deaths occurring in the US from the novel coronavirus, but also qualified his statements by referring to the projection as “a moving target.”

© REUTERS / Lucas Jackson
Healthcare workers transfer the body of a deceased person onto a stretcher at Kingsbrook Jewish Medical Center during the outbreak of the coronavirus disease (COVID19) in the Brooklyn borough of New York, U.S., April 8, 2020

“I just don’t think that we really need to make a projection when it’s such a moving target, that you could so easily be wrong,” he told CNN’s Jake Tapper in late March, while Trump was arguing an American death toll of 100,000 to 200,000 lives lost from COVID-19 would mean the country has “done a very good job.”

This major leap starkly contrasts with Trump’s previous comments on the novel coronavirus, such as his March 9 argument that the flu is more of a concern than COVID-19 - which he now refers to as the “invisible enemy.”

He also notably claimed to reporters on February 26 that the 15 cases of the COVID-19 that had been identified in the country at the time would be going down “close to zero” in “a couple of days.”

‘We Must Be Prepared’: COVID-19 Pandemic Could Last For Two Years - Researchers