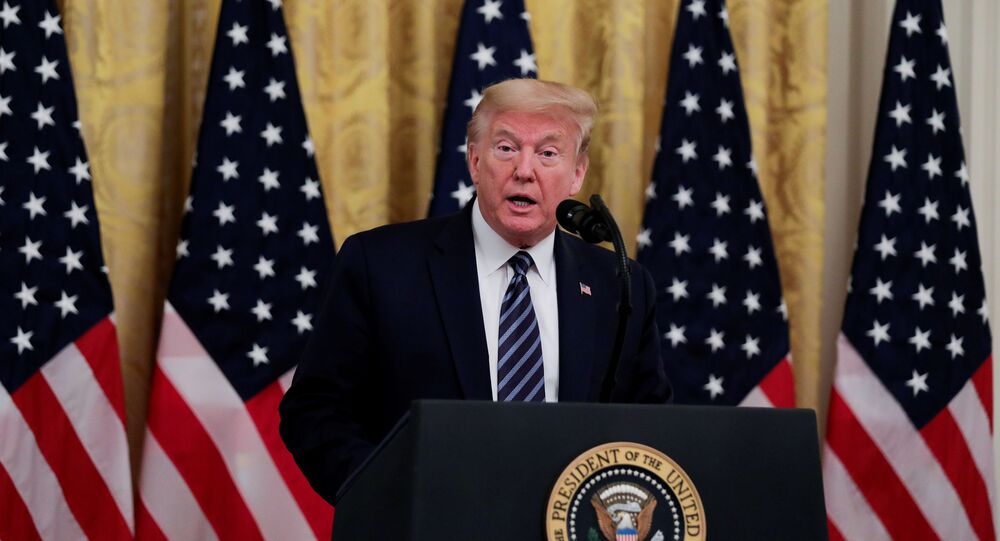 On Thursday, the US national intelligence director's office said that they agreed with “the wide scientific consensus that the COVID-19 virus was not manmade or genetically modified”.

US President Donald Trump has apparently balked at his own intelligence agency's conclusions by claiming that he saw evidence linking the coronavirus to a lab in China.

Speaking to reporters on Thursday, Trump said that he was confident COVID-19 originated from the Wuhan Institute of Virology, adding that Washington was "looking at it very, very strongly".

He declined, however, to clarify the details, adding, “I'm not allowed to tell you that”.

This was followed by Fox News reporter John Roberts pointing to a previous statement by the office of Acting Director of National Intelligence Richard Grenell which, in particular, read that “the Intelligence Community […] concurs with the wide scientific consensus that the COVID-19 virus was not manmade or genetically modified”.

“You’d have to tell me who specifically, who made the statement", Trump answered, adding that he “had not seen” it.

The remarks came after Grenell’s office said earlier on Thursday that even though they agree with the scientific consensus that the virus was not genetically modified, they're continuing to investigate how the outbreak kicked off.

“The IC [intelligence community] will continue to rigorously examine emerging information and intelligence to determine whether the outbreak began through contact with infected animals or if it was the result of an accident at a laboratory in Wuhan", the office pointed out.

China has consistently denied that the deadly virus behind the global pandemic originated at one of its labs, with the country’s Foreign Ministry stating last month that World Health Organisation (WHO) officials have “repeatedly stated that there is no evidence showing the virus was made in a lab”.

“Now [US officials] are again hyping up the issue of origins, insinuating that the virus had something to do with the Wuhan Institute of Virology. It’s not difficult to see through their tricks which intend to muddy the waters, deflect attention and shift the blame to others", spokesperson Zhao Lijian underscored.

According to the WHO’s latest updates, there are already more than three million confirmed coronavirus cases across the world, with at least 217,769 fatalities.

Matter of National Pride: Why US and China Don't Cooperate on Developing COVID-19 Vaccine