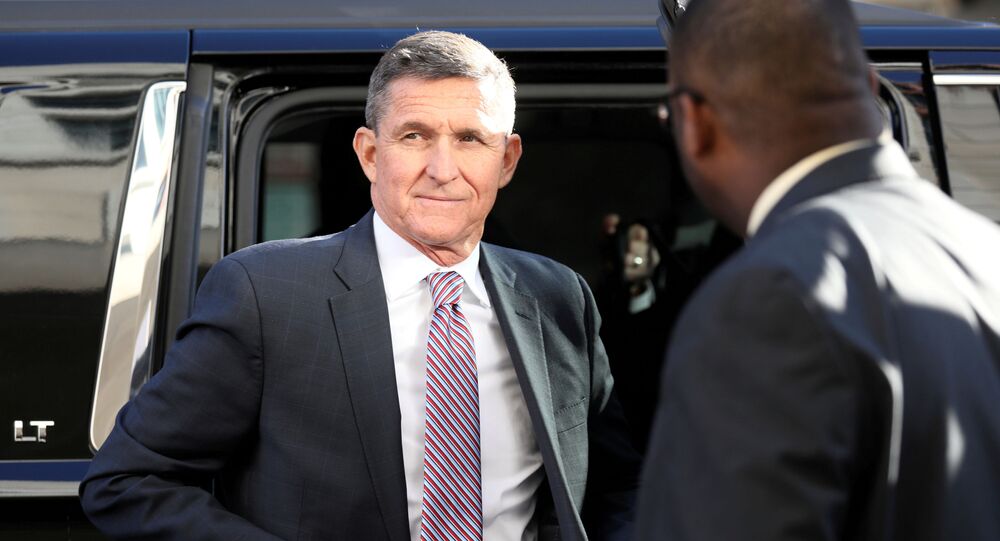 Former national security advisor Michael Flynn pleaded guilty in December 2017 to lying to the FBI about his talk with the Russian ambassador during the presidential transition in the United States.

New documents in relation to ex-advisor Michael Flynn, obtained by his defence and released on Thursday, show that the FBI initially wanted to close the probe on the grounds of "no derogatory information" found, but just the same day, senior agent Peter Strzok sent a message to the case manager urging him to keep it open.

The documents' screenshots also show the FBI stated Flynn was "no longer a viable candidate as part of the larger Crossfire Hurricane umbrella case" - the probe into the alleged Trump campaign collusion with Russia.

This is slam dunk evidence that the FBI’s own field office investigative team knew they had no basis to continue to investigate Flynn about Russia, and wanted to close the case on Jan 4, 2017. Strzok/HQ stopped them, to jam him up about the Kislyak call https://t.co/5vKKT4V8mZ

Other screenshots show Strzok's message to former FBI lawyer Lisa Page, with whom he was in a romantic relationship, in which he thanked the FBI's "utter incompetence" for hesitating with closing the probe, and another message in which he mentions that the FBI leadership is actually involved with investigating Flynn's case.

FBI and US Govt (CIA?) databases showed "no derogatory information" on Flynn.

Flynn determined to be "no longer a viable candidate" as part of the Crossfire Hurricane case. pic.twitter.com/5RfnnjucOp

Newly-unsealed Federal Bureau of Investigation notes relating the investigation of Flynn's contacts with Russian government officials also revealed the Bureau apparently set out to compel Flynn to lie, in order to "prosecute him or get him fired".

On 29 December 2016, Flynn spoke briefly with Sergey Kislyak, the Russian ambassador to the US, as to whether Russia might vote against or abstain on a UN Security Council resolution on the issue of Israeli settlements, which the FBI perceived as a "deal" between Moscow and the future Trump administration.

Russian officials have repeatedly said Russia does not interfere in the US political system and that the allegations of collusion were made up to excuse the election loss of Trump's opponent Hillary Clinton, as well as deflect public attention from instances of election fraud and corruption.

Flynn, 61, withdrew his guilty plea about lying to the FBI in January because of the government's "bad faith, vindictiveness, and breach of the plea agreement" after the Justice Department asked the judge to give him six months' jail time.

"When FBI agents came to the White House on 24 January 2017, I did not lie to them. I believed I was honest with them to the best of my recollection at the time. I still don't remember if I discussed sanctions on a phone call with Ambassador Kislyak nor do I remember if we discussed the details of a UN vote on Israel", a filing in mid-January said.

His sentencing is currently on hold as a federal judge reviews his case.

Fox News reported that no precise record of the statement made by Flynn to FBI agents existed and that the original witness report of his interview was missing, while new versions were heavily redacted. Additionally, Flynn's attorney Sidney Powell argued that the FBI edits to the 302 report - the basis for Flynn's guilty plea - was edited by Strzok and Lisa Page to present inaccurate information in order to secure the plea.