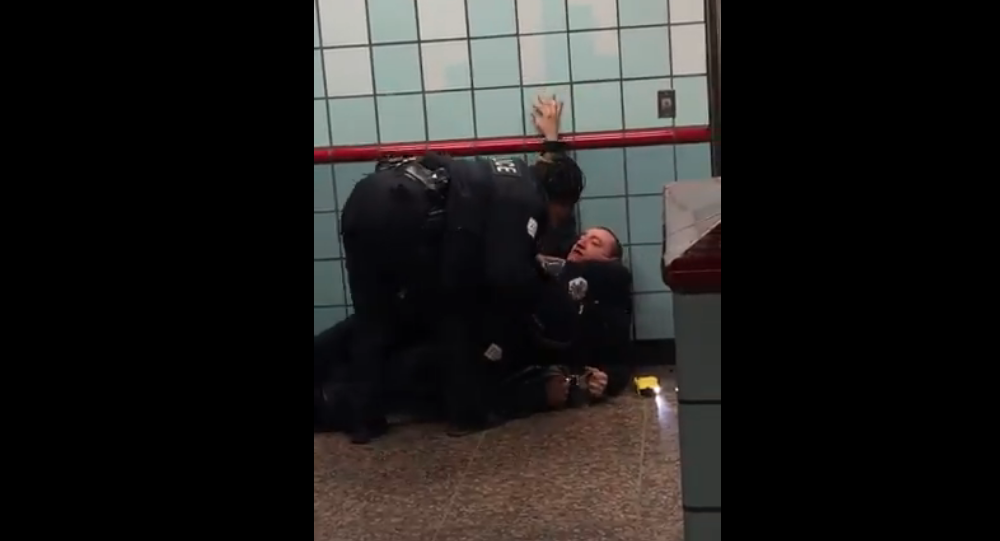 Extended surveillance and body camera footage from an officer-involved shooting in Chicago, Illinois, shows the moments before and after shots were fired at an unarmed man who has since been cleared of related charges.

The Associated Press pieced together the released media and published a video detailing the scene. Though the first video in the compilation was included in COPA’s Tuesday dump, Twitter user The Unaffiliated Critic (@FreeRangeCritic) originally recorded the scene as a bystander and published it to Twitter on February 28. It has since gained 2 million views.

Warning: Some scenes in this video may be disturbing to some.

A redacted arrest report of the incident was also included in COPA’s publication, detailing that Roman was initially charged for violating a CTA ordinance which prohibits one from creating unsafe conditions through the act of crossing between train cars, except during emergencies.

Surveillance footage from the train shows Roman catching the attention of two cops after being spotted travelling between cars via the gangway doors. While he attempts to remain on the train, the female officer comes up behind the 33-year-old and orders him to exit the car. The cop is soon joined by another officer, and a struggle ensues on the ground as the two attempt to arrest Roman.

Soon after, all three are on their feet, and the female officer is overheard instructing Roman, who is wiping his eyes after being hit with a pepper spray-like substance, to stop resisting and give his hands to the other cop, who is seen fiddling with his handcuffs. Within seconds, the first shot is fired, and Roman flees up the escalator, only to be struck in the back by a second gunshot.

Additional officers arrived at the scene and tended to Roman’s wounds until he was taken to a hospital in critical condition.

Commenting on the incident on the same day it occurred, Chicago Mayor Lori Lightfoot tweeted that eyewitness footage shared on social media was “extremely disturbing and the actions by these officers are deeply concerning.”

I view this video with the eye of someone who has personally investigated numerous police-involved shootings and reviewed evidence of many more.

Two days after the officer-involved shooting, Cook County State’s Attorney Kim Foxx was asked by Chicago Police Department then-interim Superintendent Charlie Beck to drop some of the charges against Roman.

The resisting arrest and criminal narcotics charges were later dropped by Foxx, according to the Associated Press.

Though Roman survived the incident, he has since had to undergo numerous surgical procedures related to the gunshot wound. A March 11 report from the Associated Press noted that the 33-year-old has filed a lawsuit against the city and the officers involved.

It’s worth noting that although body camera footage from five different cops was included in the official release, no body camera video from the two officers immediately involved in the shooting was provided in the Tuesday COPA release.

An investigation is still ongoing, but the two officers linked to the shooting have had their police powers stripped since the incident “due to the serious nature of both officer’s actions and the Department concurred,” noted a COPA spokesperson in a statement provided to Chicago outlet WTTW.

“COPA is committed to conducting a full, thorough and objective investigation before reaching a determination of the appropriateness of the officers’ use of force,” the COPA spokesperson added, explaining the Cook County State’s Attorney’s Office is also involved.

‘I Feared for my Life’: Student Choked by US Cop in Viral Video, Officer Suspended