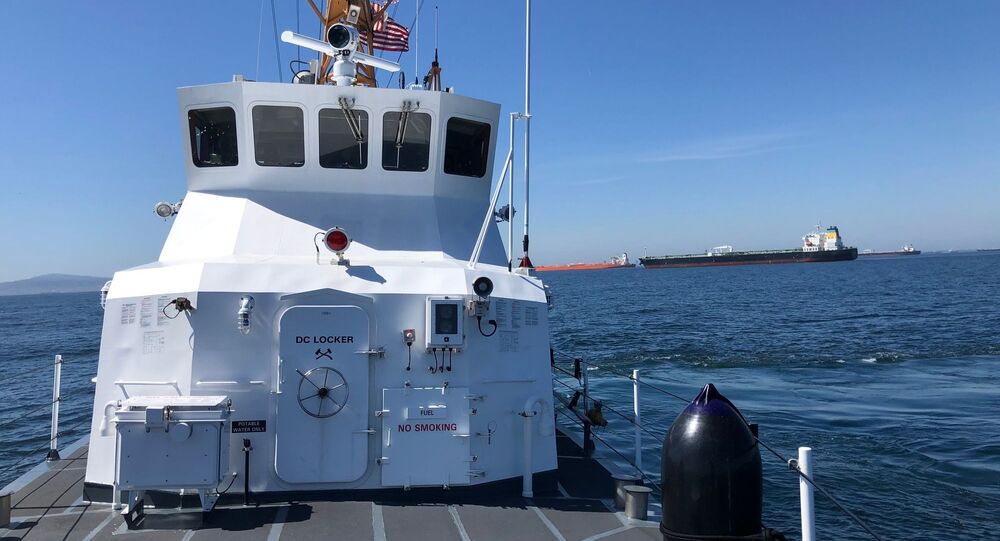 Late last week, US media reported that drone footage released on 23 April by the American Coast Guard showed a total of 27 large oil tankers floating off the coast of southern California. The vessels had reportedly been turned into storage tanks while waiting to dock at ports.

Several oil tankers currently floating off the coast of California are due to depart in the next few days, while most of the vessels may stay there indefinitely, Captain J. Kip Louttit, executive director of the Marine Exchange of Southern California, said on Wednesday.

“There are 20 tankers [in the area], and 14 of them are expected to remain there indefinitely or for a long time; six tankers should leave within the next five days”, he pointed out.

Louttit added that five more tankers are expected to arrive this week, and that four of them are set to unload their cargo while one such vessel will anchor for a long time.

“So we have a mixture of those [tankers] which anchor or get unloaded, depending on which company they belong to”, he said, referring to a total of 28 vessels, including five cruise liners, that are currently in his area of responsibility.

The remarks come a few days after The Los Angeles Times reported that drone footage released on 23 April by the US Coast Guard showed a total of 27 large oil tankers floating off the coast of southern California.

The tankers, which were reportedly turned into storage tanks, could be seen anchored at a safe distance from each other near the ports of Los Angeles and Long Beach.

Commander Marshall Newberry, from Coast Guard Sector Los Angeles and Long Beach, said in a statement late last week that “due to the unique nature of this situation, the US Coast Guard is constantly evaluating and adapting our procedures to ensure the safety of the vessels at anchor and the protection of the surrounding environment […]”.

He spoke after Reuters cited unnamed shipping industry sources as saying that about 160 million barrels of oil are currently being stored in large tankers outside shipping ports due to a lack of onshore storage space.

Since very large crude carriers (VLCCs) were chartered to store oil at sea in February, the number has increased to 60, and is forecast to triple in the upcoming months. The VLCCs are reportedly mostly located near Singapore and in the US Gulf Coast.

The current oversupply, which has already reached around 9 million barrels per day, was triggered by a drop in global oil demand, as a result of the ongoing coronavirus pandemic.

The glut fueled unprecedented trading on 20 April, when the price for May oil contracts plummeted below zero, breaking every low for crude prices since 1946.

Earlier this month, Saudi Arabia, Russia, and other petroleum-exporting nations within OPEC+ agreed to slash their oil production by 9.7 million barrels per day through June, in a bid to remove some of the oversupply from the market.