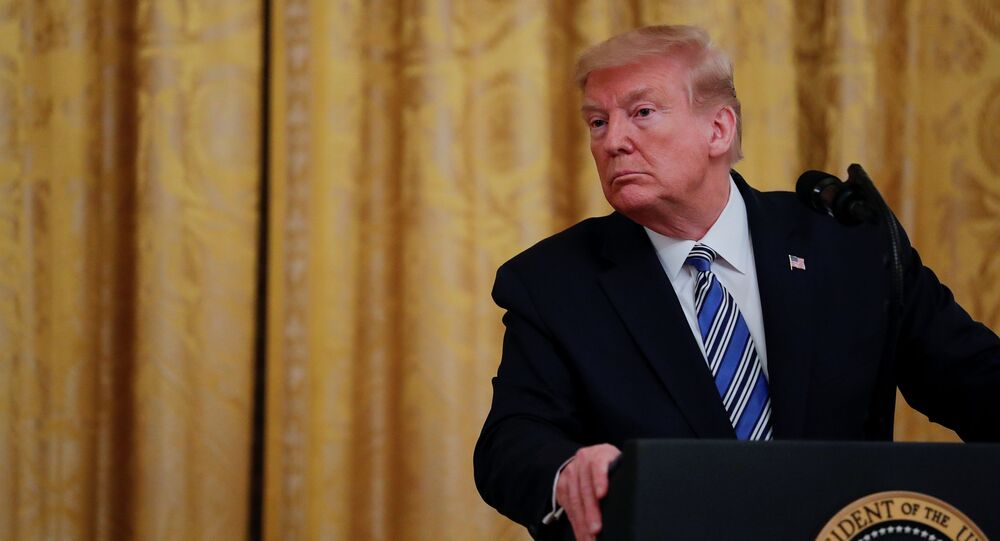 On Tuesday, US President Donald Trump invoked the Defense Production Act, signing a presidential order decreeing that meat packing plants must stay open to buttress the nation’s food supply amid widespread disruptions from the COVID-19 pandemic.

According to the executive order, recent closures of meat processing plants across the country have threatened "the continued functioning of the national meat and poultry supply chain, undermining critical infrastructure during the national emergency" amid the pandemic.

The US president stressed that "any unnecessary closures" of these facilities can disrupt the supply chain. As a result, Secretary of Agriculture Sunny Perdue has been granted the authority to "take all appropriate action under that section to ensure that meat and poultry processors continue operations."

Trump’s use of the Defense Production Act comes hours after he told reporters that supply chains nationwide were stuck at a “legal roadblock” that is impeding business, despite the fact that “there’s plenty of supply.”

Citing an anonymous senior White House official, the Associated Press reported that the Trump administration pushed for the executive order to prevent a potential 80% drop in meat availability for supermarkets nationwide.

Tyson Foods Chairman John Tyson also warned on Sunday that “millions of pounds of meat will disappear” from stores, and only a “limited supply” will be available due to the emergence of COVID-19 cases among the company’s workforce and subsequent facility closures, including of the Iowa-based Tyson Fresh Meats plant - the company’s largest producer of pork. Some 180 novel coronavirus cases had been linked to the facility at the time of the April 22 closure.

“Despite our continued efforts to keep our people safe while fulfilling our critical role of feeding American families, the combination of worker absenteeism, COVID-19 cases and community concerns has resulted in our decision to stop production,” Tyson said within a full-page ad published in the New York Times, the Washington Post and the Arkansas Democrat-Gazette on April 26.

Furthermore, Smithfield Foods indefinitely suspended operations at its Sioux Falls, South Dakota, facility on April 12, after it was identified as a hotspot for the novel coronavirus. As of late, more than 1,000 COVID-19 infections have been linked to the plant, and the US Centers for Disease Control and Prevention has issued an extensive list of recommendations to Smithfield Foods as it attempts to reduce possible transmission of the contagious disease.

“The virus is afflicting communities everywhere. The agriculture and food sectors have not been immune,” Smithfield Foods President and CEO Kenneth M. Sullivan said in a company release. “We have a stark choice as a nation: we are either going to produce food or not, even in the face of COVID-19.”

While Trump’s executive order calls for the federal government to issue assistance to workers in the form of additional protective gear, the Retail, Wholesale and Department Store Union claimed the administration was blinded by its focus on the economy.

“We only wish that this administration cared as much about the lives of working people as it does about meat, pork and poultry products,” Stuart Appelbaum, the labor union’s president, said, as reported by Bloomberg.

The United Food and Commercial Workers International Union (UFCW), the largest food and retail union in the nation, also issued a statement directed at the Trump administration, Congress and state governments on Tuesday, calling for “immediate action to protect the millions of workers who are keeping our communities strong throughout the crisis.”

“American lives are on the line. We cannot wait any longer. We need action now,” UFCW International President Marc Perrone said in the union release.

'Countries Going Through Hell': Trump Stresses COVID-19 Should Have Been Contained in China