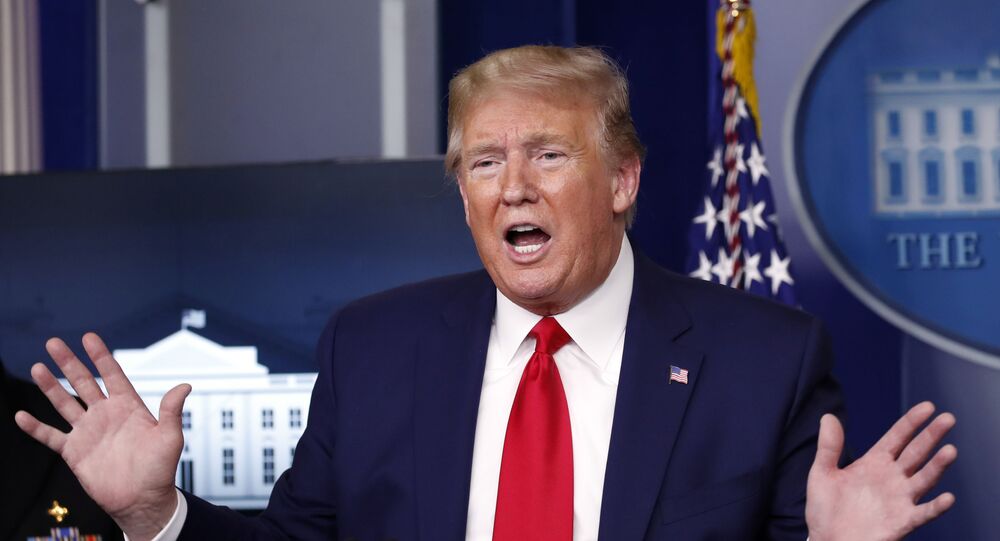 US President Donald Trump told reporters Monday his administration was conducting "serious investigations" of China's handling of the original outbreak of COVID-19 in Wuhan.

"We are not happy with China," Trump told reporters at the White House on Monday.

The US president said that COVID-19 could have been stopped while it was still in the Chinese city of Wuhan, where the original outbreak of the virus happened in late 2019 and early 2020. Trump said the US has been conducting "serious investigations" that will be released in the future.

When asked about possible ramifications for China following the investigations, Trump noted that there are "a lot of ways" the US could respond, but stopped short of going into detail.

"We'll let you know at the appropriate time," he told reporters.

Trump also announced new plans for how his administration plans to assist state governments with COVID-19 novel coronavirus matters through the publication of its "Testing Overview" and "Testing Blueprint" on Monday.

As state governments have issued calls for federal assistance amid the novel coronavirus pandemic, Trump's "Testing Overview" noted that his administration shall only be "acting as supplier of last resort" when it pertains to issues of testing Americans for COVID-19.

However, Assistant Secretary for Health Admiral Brett P. Giroir said during the Monday briefing that the federal government would be able to supply every state with tests necessary in the future.

The document, re-uploaded by Axios, calls for an eight-part plan divided into three stages: launch, scale and support opening up again.

Stage one seeks to "facilitate state efforts to access and utilize all available testing capacity" by ramping up the novel coronavirus testing capacity of commercial and research labs, issuing Emergency Use Authorizations for tests and mobilizing the private sector to develop additional tests.

The "Testing Blueprint" is presented to state and local officials to as a model of how to "reopen their economies and get people back to work, while protecting the health and safety of the American people."

The US president asserted that it is a "good thing" that states have considered moving up the dates by which they expect to reopen schools, claiming that "young people seem to do very well" with the virus - referencing the low fatality rate among younger individuals who test positive for COVID-19.

However, in addition to children with the novel coronavirus being able to spread the contagious disease to their parents, grandparents and other more vulnerable people, a recently-identified link between COVID-19 and fatal strokes suggests that age, or being immunocompromised, is not always the primary factor.

Trump also spoke positively of the idea in a phone call to US governors earlier on Monday.

“Some of you might start to think about school openings,” he said, according to an audio recording obtained by the New York Times. “The young children have done very well in this disaster that we’ve all gone through, so a lot of people are thinking about the school openings.”