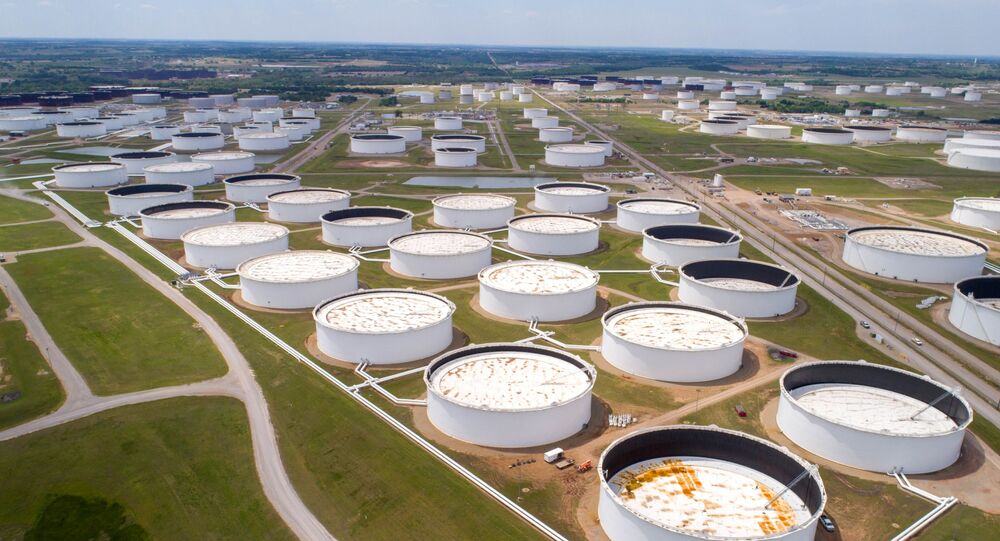 WASHINGTON (Sputnik) - The US Energy Information Agency (EIA) said it was closely monitoring the nation's crude oil storage facility in Cushing, Oklahoma, due to fears that it was running out of space following a massive market selloff and historic negative prices for fossil fuels.

"The availability of storage in Cushing will remain an issue in the coming weeks, however, and could still result in volatile price movements in the June WTI futures contract or other US crude oil spot prices that face limited storage options," the EIA said in a post, adding that it will continue to monitor market developments.

In May, the soon-to-expire next-month contract for US West Texas Intermediate (WTI) crude, fell to negative $37.63 per barrel on Monday for the first time in the commodity’s 37-year trading history - as no buyers turned up for delivery of oil in a glutted market following economic downturns as a result of the coronavirus (COVID-19) pandemic.

For June WTI futures, the commodity rose 19 percent to $13.78 per barrel in its first trading day on Wednesday.

Despite a small market rebound, fears remain that Cushing will run out of space after the EIA reported on Wednesday that the addition of nearly 5 million barrels to the hub had brought the total to nearly 60 million barrels. The facility's capacity is said to max out at 76 million barrels.

Previous data released by the EIA showed some 65 million barrels were delivered to Cushing over the past four weeks, averaging a growth of 16.25 million barrels each week, suggesting that the US facility had just one more week until it was full.

"Although Cushing has physically unfilled storage available, some of this physically unfilled storage is likely to have already been leased or otherwise committed, limiting the uncommitted storage available for contract holders without pre-existing arrangements. In this case, these contract holders would likely have to pay much higher rates to storage operators that have uncommitted space available," the EIA said. "Taken together, these factors suggest that the phenomenon of negative WTI prices could be confined to the financial market, with few physical market participants paying negative prices."

Aside from the plummeting drop in demand for oil, US crude prices could turn negative again due to higher-than-necessary production, according to some in the industry. The EIA reported on Wednesday that oil output in the United States stood at a relatively high 12.2 million barrels per day last week, only 100,000 barrels per day less than the previous week.