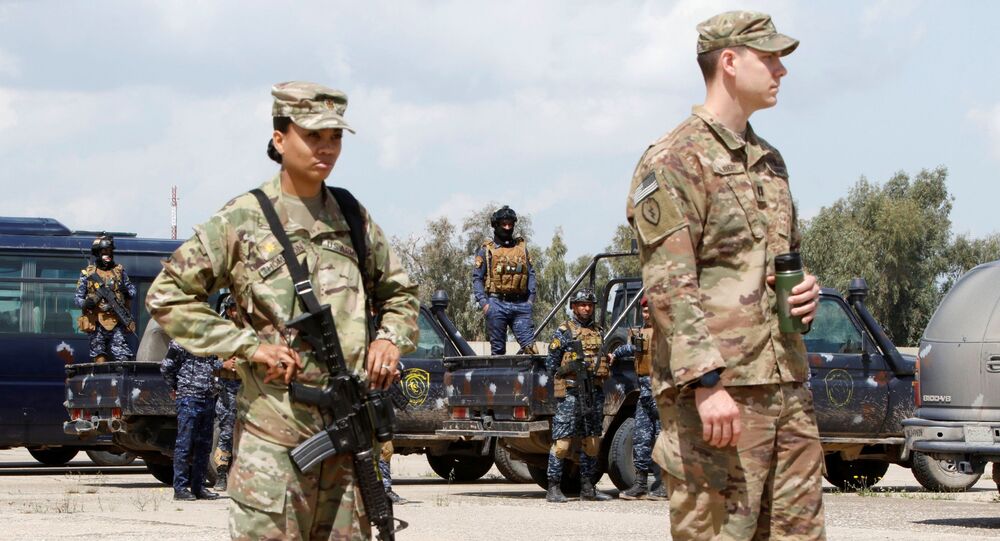 The Iranian attack on US military bases in Iraq on 8 January followed an American drone strike that killed top Iranian commander Qasem Soleimani. Before the attack, Iranian officials had said Tehran would retaliate against US forces for Soleimani's killing.

The US Department of Defence on Tuesday released a 36-page dossier of firsthand accounts from the airmen who were present during the "retaliatory" missile strike by Iran on 8 January.

The document includes stories from soldiers who were at the US bases of Ayn al-Asad, Erbil, Camp Taji, and Al Taqaddum in Iraq during the attack.

Iran warned the Iraqi government about the attack shortly before it happened, and the information was reportedly passed to the Americans. According to the DoD report, the warning gave the base commandors little time to make "life or death decisions based on little information and a lot of gut", many of them thinking that everyone who was left at the airbase would "perish".

The officers there had to quickly compile lists of their personnel divided into two groups: those who should be evacuated and those who would remain to maintain operations, according to the new DoD report.

'Phoenixes Rise From The Ashes'

Lt. Col. Staci Coleman, commander of the Al Asad base, advised her flight commanders to pick those to stay on the base according to their emotional state and combat abilities.

"My flight commanders were responsible for compiling the lists of personnel, and I explained it needed to be divided by combat capability and then by those they believed were emotionally equipped to endure remaining behind for a possible missile attack", she said.

For quite a long time, those evacuated did not know if the personnel chosen to stay behind had survived the attack. Captain Adella Ramos was one of the people chosen to stay at the base without knowing whether she would live through the night.

"The mere seconds following the announcement 'INCOMING' were felt in slow motion. Not knowing if you would be the target was the biggest mental tribulation. I learned there is immense power in brotherhood among my military family. In the face of what I felt was my darkest hour, I was not alone", Capt. Adella Ramos shared in the dossier.

Major Jonathan Jordan, Ayn al-Asad's Director of Operations, was to lead the evacuation of the other half of the team. He shared different emotions in his story, from shame at having to be relieved to guilt and anxiety. While flying away with the rest of the team, he tried to keep up the spirits of the gloomy soldiers who were not sure if they would ever see their comrades again. When the news came that no one was killed, "chills rushed" through his body.

"As we boarded the buses to the plane back to Al Asad, I looked at my troops, eager to get back and relieved their friends were okay. I took one more opportunity to speak. "Anyone notice our squadron patch is a Phoenix? Phoenixes rise from the ashes", Major Jordan said in the dossier.

After Iranian Islamic Revolutionary Guard Corps (IRGC) commander Qasem Soleimani was assassinated by the US in a drone strike, the general's successor Esmail Qaani vowed to "continue Martyr Soleimani’s path with the same force", promising to retaliate for the killing of the IRGC general.

On 8 January, Iran struck the Ayn al-Asad airbase in western Iraq and another facility in the Iraqi city of Erbil. US President Donald Trump first claimed on his Twitter that "all is well" and the attack did not kill or injure any US personnel, which some analysts argued was Iran's intent all along.

However, it gradually turned out later that over 100 US service members have since been diagnosed with traumatic brain injury (TBI).

Soleimani was killed on the direct order of Donald Trump in Baghdad, Iraq on 3 January when the convoy he was travelling in with Shia militia commander Abu Mahdi Muhandis was targeted by a US drone.

During the more than two decades that he served as Quds Force commander, Soleimani coordinated multiple Iranian anti-terrorist operations across the Middle East. US officials had accused the late Quds Force leader of having “the blood of hundreds of American soldiers and Marines on his hands”, but never succeeded in presenting any evidence to substantiate the claims.