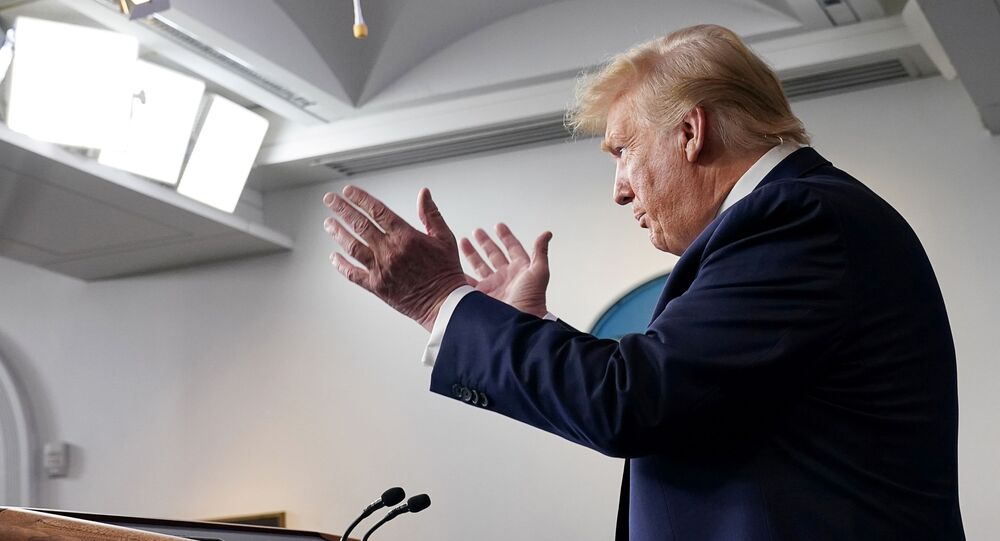 'Always a Waste of Time': Trump Threatens to Adjourn US Congress to Make Recess Appointments

The US president threatened on Wednesday to adjourn the federal legislature in order push through a series of recess appointments.

US President Donald Trump claimed on Wednesday there had been “a concerted effort" by congressional Democrats "to make life difficult” by refusing to approve his nominations for several vacant offices.

The Senate is in recess until May 4, although it is possible for it to be recalled if necessary.

Trump noted there are currently 129 nominees "stuck in the Senate because of partisan obstruction," including the director of national intelligence, two members of the Federal Reserve board of governors and several undersecretaries of different US government departments.

"The Senate should either fulfill its duty and vote on my nominees, or it should formally adjourn so that I can make recess appointments," he said, bemoaning "pro forma" meetings in which no Senate business actually happens. "We have to do it, and we have to do whatever we have to do."

"If the House will not agree to that adjournment, I will exercise my constitutional authority to adjourn both chambers of Congress," Trump said, accusing lawmakers of "a dereliction of duty" and "a scam" for "leaving town during a crisis."

He later told a reporter who sought clarification that "it's very simple: if they don’t act on getting these people approved … we are going to do something I prefer not doing … but will do."

TRUMP: "We have the right to do whatever we want." pic.twitter.com/59QFGgbV2O

​"We have the right to do whatever we want," Trump later said, "but we wouldn't do that, and I don't think there would be any reason to do that."

"If they don’t approve it, we’ll go this route," he told another reporter. "We needed these people before, but now we really need these people."

Article II, Section 3 of the US Constitution gives the president the power to both call Congress into a special session as well as to adjourn both houses of Congress if they cannot agree on a time to do so. However, a president has never exercised the latter of these rights.

"The President has declared he has the authority to adjourn both chambers of Congress in order then to fill vacancies in the executive and judicial branches by way of recess appointment. To my knowledge, no president has ever exercised the Adjournment Power in this way. It would be an unprecedented use of a little-known clause in the United States Constitution. And yet, according to my colleague Josh Blackman, it appears that all nine justices of the Supreme Court have recently 'seemed to agree that the adjournment power could be used to facilitate recess appointments'”, William Stamps Farish Professor in Law and Professor of Government at the University of Texas at Austin Richard Albert says.

The remarks come just days after Trump claimed his "authority is total" with regards to reopening US states from lockdowns, as US governors form their own regional plans for ending travel and socialization restrictions.

Republican senator and Senate Majority Leader Mitch McConnell said in a statement Wednesday evening that he had spoken with Trump about ways to confirm the president's nominees considered critical to combating the COVID-19 pandemic, but that it would require the consent of Democratic senator Charles Schumer, who leads the minority Democrats in the chamber.

Guidelines on the reopening of several US states from COVID-19 safety lockdowns will come later this week, Trump announced.

The United States has “passed the peak on new cases," Trump said, noting that guidelines on opening some US states from their lockdowns would follow on Thursday.

A plan crafted by the Federal Emergency Management Agency (FEMA) and the Centers for Disease Control and Prevention (CDC) was leaked to the Washington Post earlier on Wednesday, showing the US government agencies are looking at reopening some parts of the country by May 1. The Trump administration's 30-day plan for social distancing "to slow the spread" of COVID-19 ends the day prior.

Dr. Deborah Birx, a member of Trump's Coronavirus Task Force, noted how different the experience of the pandemic has been for various US states. While some states have seen an explosion of cases like the New York metropolitan area, others have seen few cases, and some, like Washington state, never saw the characteristic "peak" in cases.