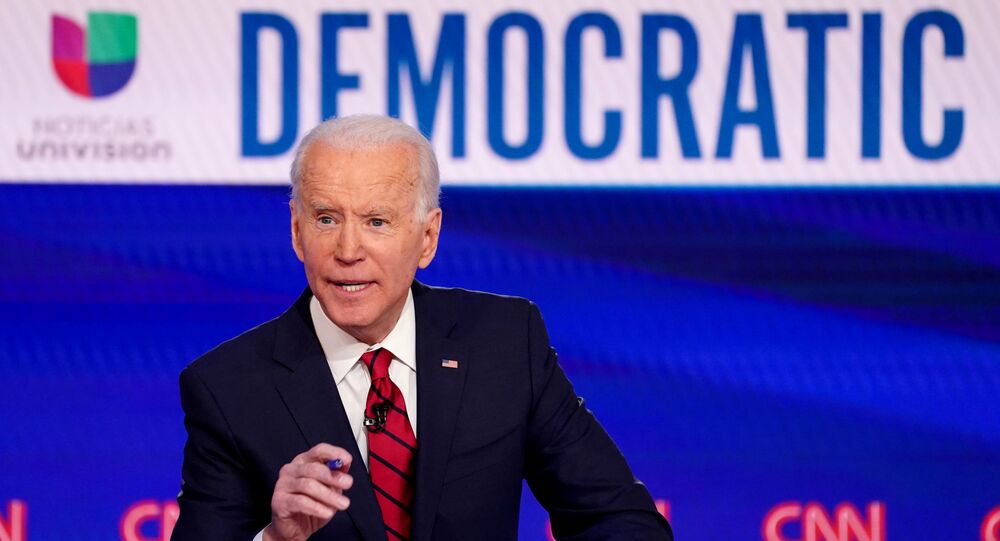 Candidate Joe Biden presented his concept of a "national strategy" for "safely reopening America" after the novel coronavirus pandemic in an opinion-editorial in the New York Times, claiming that "so far, the Trump administration hasn't supplied an answer".

Biden's "national strategy" involves first the administration of a vaccine, however, he stressed that it would be wrong to "stay home and wait for the vaccine to arrive", underlining the necessity to "build a bridge from here to there". He added that one of the key points in his plan is to reduce the number of COVID-19 cases.

"First, we have to get the number of new cases of the disease down significantly. That means social distancing has to continue and the people on the front lines have to get the supplies and equipment they need", Biden said.

Biden stressed that in order to get Americans back to their jobs, "the President needs to do better at his job".

"President Trump needs to use his full powers under the Defense Production Act to fight the disease with every tool at our disposal. He needs to get the federal response organized and stop making excuses. For more Americans to go back to their jobs, the president needs to do better at his job", according to his article.

Another crucial Biden point is the need for "widespread, easily available and prompt testing", a need that he claims the Trump administration has failed to achieve.

"We should be running multiple times the number of diagnostic tests we’re performing right now. And we should be ready to scale up a second form of testing: rapid serology tests to tell who has already been infected with the coronavirus and has antibodies. We are now several months into this crisis, and still this administration has not squarely faced up to the “original sin” in its failed response — the failure to test", Biden said.

Biden highlighted the need for the US health care system to be ready for "flare-ups of the disease that may occur when economic activity expands again". He asserted that life will not return to normal "right away", and vowed that he would involve "top experts from the private sector, industry by industry" to safely help the economy and business to be restored.

Biden slammed the current administration for its failure "to plan, to prepare, to honestly assess and communicate the threat to the nation".

"As we prepare to reopen America, we have to remember what this crisis has taught us: The administration’s failure to plan, to prepare, to honestly assess and communicate the threat to the nation led to catastrophic results. We cannot repeat those mistakes", Biden stated.

The Trump administration's approach to addressing the crisis of the ongoing pandemic has been heavily criticized in the US, as the White House is blamed for waiting too long to impose social distancing measures and not accepting the actual threat of COVID-19 in spite of multiple warnings from within its own staff and cabinet.

Dr. Anthony Fauci, while commenting on the NYT report on top health officials allegedly warning Trump on the pandemic in February, said to CNN that the US  "obviously" could have saved lives if social distancing measures had been implemented earlier.

"I mean, obviously, you could logically say that if you had a process, that was ongoing and you started mitigation earlier you could have saved lives," he said. "Obviously no one is going to deny that, but what goes into those kind of decisions is complicated".

Trump has argued that he banned travel from China in time and denies delaying measures that would have mitigated the high rate of infection and deaths in the US, tweeting that those who accuse him of "ignoring early warnings about the pandemic" are "corrupt" and "fake news".

Candidate Biden won the Alaska primary, and, after Senator Bernie Sanders dropped out of the race, the former US vice president appears to be Trump's only viable opponent for the November 2020 US presidential election.