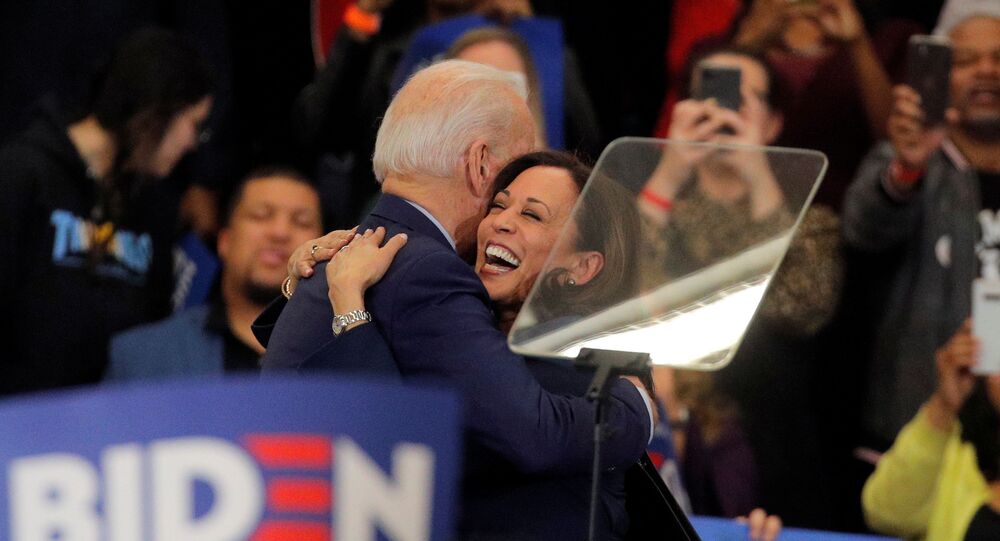 Joe Biden is now the presumptive Democratic nominee in the upcoming US presidential election, as Vermont Senator Bernie Sanders ended his campaign earlier in the day.

Democratic candidate for the US presidency Joe Biden praised Kamala Harris for her support and "partnership" during a live virtual fundraiser. Harris was a special guest at the event.

Harris previolusly dropped out of the presidential race in December 2019. In a cameo in Biden's virtual event, she appeared on video from Washington, slamming Trump as a “complete failure” and adding that Biden would be the right president at a time when people "need to have hope [...] need to have faith". Earlier on Wednesday, she said she was "honored to even be considered, if that's the case" when asked about the possibility of being Biden's VP.

Biden said that he is "so lucky" to have Harris "on this partnership going forward". Among his remarks, one in particular stuck with Twitter users.

"Working together, we can make a great deal of progress. I’m coming for you, kid.", Biden said during the virtual event, cited by AP.

Netizens were prompt to share their ideas and projections regarding possible Biden-Harris ticket.

THIS! SO MUCH THIS!

We coulda had Kamala! Beto! Castro! Booker! Gillibrand! But the Berners whined & pitched a fit and ran off everyone who wasn't their precious cult leader with digital smear campaigns.

No matter. #BidenHarris'll do the trick against trump.

Bernie’s role isn’t to win its only to divide. All I want to know is, WHEN CAN BIDEN ANNOUNCE HIS VP PICK? Ladies, WE ARE GOING TO HAVE OUR FIRST FEMALE VP!!! Once Biden announces (Kamala?❤️) who she is, I think a lot of people will go insane with hope!!!

“The tag-team of dreams”

Biden's VP pick needs to be Kamala Harris. No one else even comes close. pic.twitter.com/IkB0zKqylY

Biden committed to choosing a woman as his running mate earlier in debates with Bernie Sanders, saying that "there are a number of women who are qualified to be president tomorrow". There were hints at several candidates among his ex-rivals from the primaries.

One of the other candidates is Stacey Abrams, a political leader and "Fair Fight" founder, who earlier expressed a readiness to be Biden's running mate.

.@staceyabrams to @danpfeiffer: "I would be honored to be on the campaign trail as a running mate" to Joe Biden.

​Some interpreted former US President Barack Obama's tweet regarding Elizabeth Warren as a possible hint for Biden to choose the Massachusetts Senator as a running mate.

As she often does, @SenWarren provides a cogent summary of how federal policymakers should be thinking about the pandemic in the coming months. https://t.co/zkX0E7ncK5

​The US presidential election is set to take place November 2020, with Biden, as the last Democratic candidate standing, to go up against incumbent US President Donald Trump.