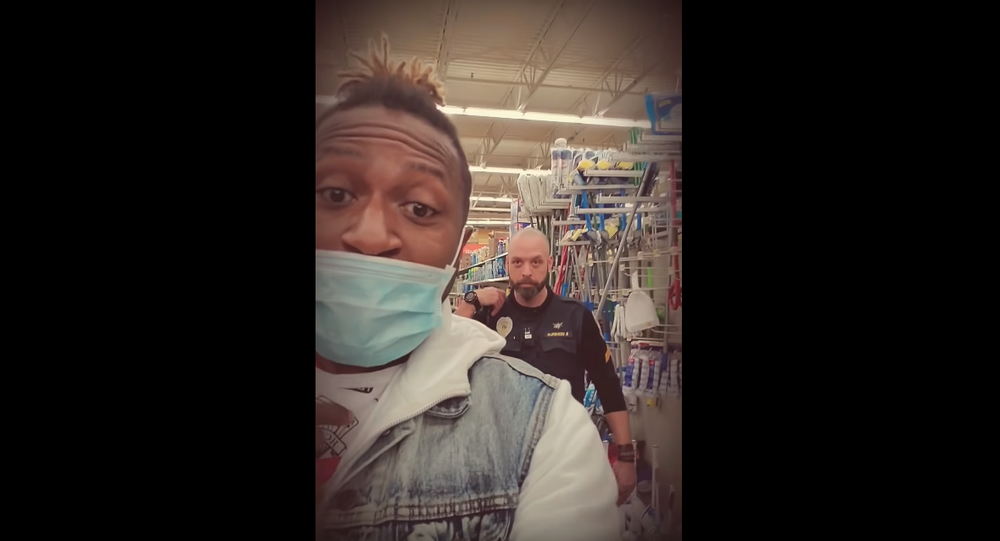 Illinois’ Wood River Police Department is receiving backlash after one of its officers was featured in a now-viral video that shows him following two black men in an area Walmart over a face mask policy that was later found to be nonexistent.

Jermon Best and his friend Diangelo Jackson told Illinois newspaper The Telegraph that they were subjected to harassment and racial profiling by a Wood River police officer on March 15 over their decision to wear medical masks and protect themselves from the COVID-19 novel coronavirus.

Best managed to capture nearly 90 seconds of the incident in question on his cellphone camera. The officer, who remains unidentified, is seen trailing the two young men as they make their way to the exit of the Walmart.

“He just followed us from outside [and] told us we can’t wear masks,” Best explained in the recording. “We’re being asked to leave for being safe.”

“The coronavirus is real,” Best highlighted, speaking directly to the camera.

The two young men have since filed official complaints against the officer, and the Wood River Police Department has launched an internal investigation into the matter.

“I don’t know this guy personally … We just want to shine some light because this happens so often,” Best told The Telegraph, referring to racial profiling.

Jackson informed the outlet that he was worried the officer, seen touching his weapon multiple times during the video, would do “something he’s not supposed to do.”

“Just watching a lot of videos of police officers abusing their authority towards people was keeping me afraid, wondering why this cop was harassing us,” he added.

Before the internal investigation was launched, Wood River Police Chief Brad Wells confessed to The Telegraph that the officer “was mistaken when it came to the store’s policy prohibiting masks.”

“They immediately went into the race issue,” Wells claimed. “[The officer] didn’t kick them out of the store or refuse entry.”

However, Best makes no direct reference to race during his short clip and also told the outlet that he “never said that the guy was racist,” even though “his actions were suspect.”
According to the police chief, the officer believed it was Best and Jackson who were acting suspicious, prompting him to approach the men and ask for their IDs. Wells claimed that the two young men refused to produce identification and informed the officer they were leaving the store.

​”With the current pandemic it is understandable why any person is wearing a mask to protect themselves,” Wells said. “On March 15, 2020, not many people were wearing a mask. A review of video from the store does not reveal anyone else wearing a mask.”

Jackson can be overheard in the video claiming that he and Best were not the only two individuals wearing medical masks in the Walmart.

Considering the opposing viewpoints on the situation, it is likely that the officer’s body camera footage will be examined.

“The investigation is active, and a complete review of the incident will be done, not only by the Wood River Police Department, but the NAACP and the FBI,” Wells noted.