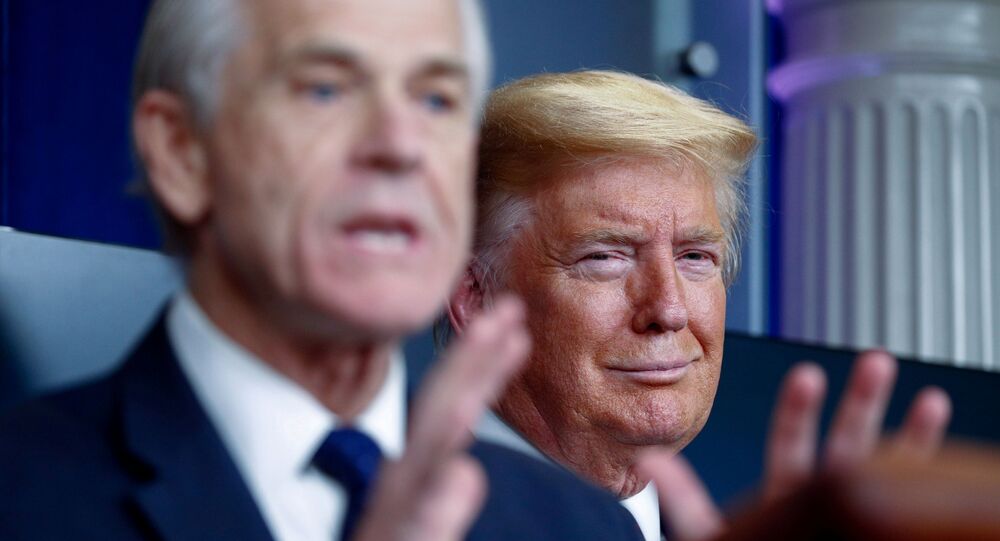 In the early stages of the outbreak on US soil, POTUS repeatedly refuted concerns regarding the potential dangers of the disease spreading throughout the country. Currently, the US leads the world for the number of registered infections and is third, behind Italy and Spain, in fatalities resulting from the deadly coronavirus.

The US president's trade adviser, Peter Navarro, on 29 January drafted a memo warning that the novel coronavirus could become a major pandemic, hitting Americans particularly hard, if measures were not taken, The New York Times reported, citing the document.

"The lack of immune protection or an existing cure or vaccine would leave Americans defenseless in the case of a full-blown coronavirus outbreak on US soil. This lack of protection elevates the risk of the coronavirus evolving into a full-blown pandemic, imperiling the lives of millions of Americans", the memo reportedly said.

The media said that the memo is alleged to have circulated the White House, but it is unclear if POTUS read it. The memo was allegedly drafted not long after Trump assured the US that the situation was "totally under control", adding that he placed his full trust in China's reporting of the outbreak. The last comment of Trump's drastically changed after the number of new COVID-19 cases began to spike on American soil.

At the same time, following the alleged date the memo was written, Trump announced the creation of a special task force to deal with the coronavirus outbreak and started mulling the closure of borders with China, disregarding the opposite suggestion from the World Health Organisation (WHO).

According to a report of another media outlet, Axio, citing the obtained paper, Navarro drafted another memo in February on the virus threat, warning that the risk of the outbreak in the US was increasing and that its scale could be enormous.

"[There is an] increasing probability of a full-blown COVID-19 pandemic that could infect as many as 100 million Americans, with a loss of life of as many as 1.2 million souls", he reportedly said in the second memo.

Trump's trade adviser reportedly warned in the memo of "trillions of dollars in economic damage" that a pandemic could cause to the US economy. In the light of the danger, Navarro called on White House officials to quickly appropriate funds to cope with the crisis.

The news comes as the US leads globally on the number of COVID-19 infections, with over 383,000 cases according to the most recent data. The US also continues to report increasing numbers of fatalities from the disease.

New York state authorities reported on 7 April a record-breaking rise in fatal cases - at least 731 victims of the virus in the last 24 hours. According to the the most updated data for the same date, the total death toll from COVID-19 has reached 12,275 people in the US, placing it third, behind Italy and Spain.