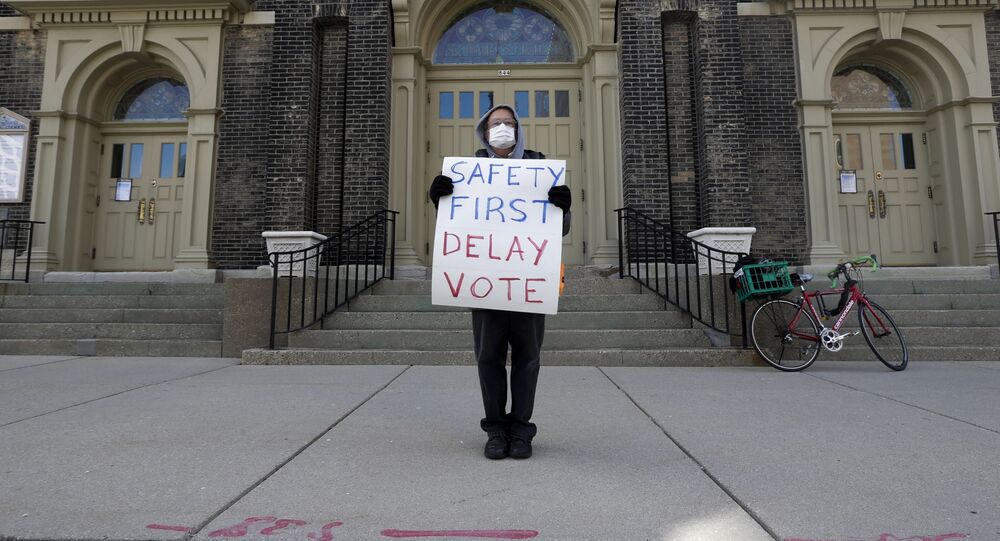 On Monday, Wisconsin Governor Tony Evers inked an executive order to postpone Tuesday's presidential primary election in the state until 9 June due to the ongoing COVID-19 crisis. As of Monday night, Wisconsin has reported about 2,500 confirmed coronavirus cases with at least 77 fatalities.

Wisconsin Republican Party Chairman Andrew Hitt has signaled a readiness to take part in the state’s presidential primary vote scheduled for Tuesday, in the face of stay-at-home orders by President Trump’s health advisers to tackle the coronavirus pandemic.

“Wisconsin voters are pretty determined. I can't really think of something more essential than voting”, he said on Monday, adding that the state’s residents continue to visit local stores.

Referring to Trump’s previous recommendation that all Americans should wear masks when leaving their homes, Hitt said that he “doesn’t have one” and that he is sure “most Wisconsinites don’t have masks; this isn't New York City”.

The remarks come amid reports that scores of polling places in Wisconsin will be closed on Tuesday as the rest are due to open at 7 a.m. CDT.

On Monday, Wisconsin Governor Tony Evers ordered the postponement of the vote until 9 June due to the novel coronavirus outbreak, in a move that was then blocked by the state’s Supreme Court.

He stressed in a statement that “the people of Wisconsin, the majority of them, don’t spend all their waking hours thinking about are Republicans or Democrats getting the upper hand here”.

Evers underscored that the bottom line is that he has “an obligation to keep people safe, and that’s why I signed this executive order today”.

The Wisconsin Democratic Party has called to delay their state's primary.

As have the mayors of Milwaukee, Green Bay & Racine.

And US judge William Conley.

“This is another last-minute flip-flop from the governor”, they noted, adding that Evers himself “has repeatedly acknowledged he can’t move the election” and that “just last week a federal judge said he didn’t have the power to cancel the election and Gov. Evers can’t either”.

The statement came as the Hill reported that in Wisconsin’s largest city, Milwaukee, only between six and 12 polling stations may open for in-person voting, in comparison with 180 that were in place during the 2016 election.

As of Monday night, Wisconsin has reported almost 2,500 confirmed coronavirus cases with at least 77 deaths, while the whole of the US has already seen more than 360,000 COVID-19 infections and nearly 11,000 fatalities.