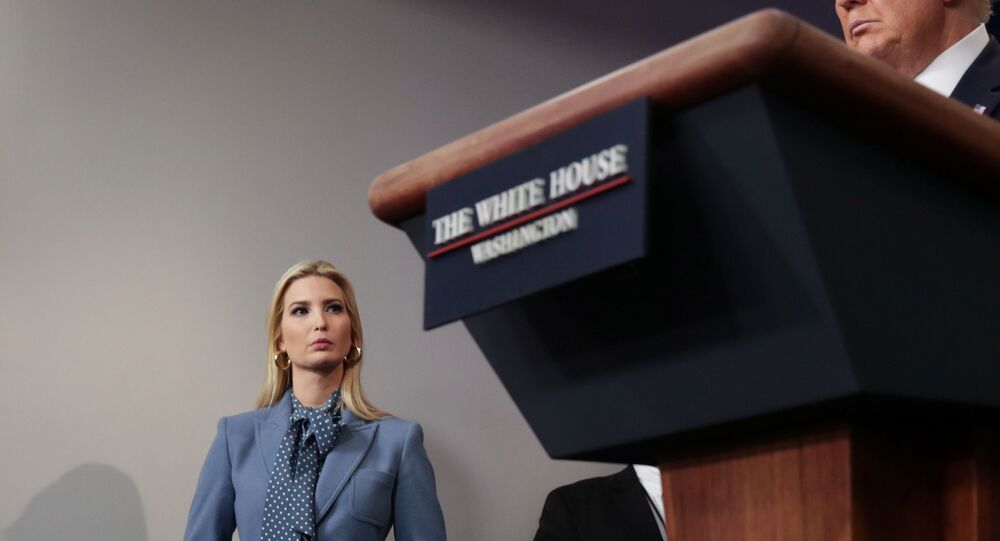 The US administration launched a paycheck protection programme on 3 April, allowing small businesses to avoid layoffs amid COVID-19 shutdowns, hoping to start cash handouts to taxpayers within two weeks, according to Secretary of the Treasury Steve Mnuchin.

Bank executives allegedly reached out to Ivanka Trump amid their concerns over the US government’s rollout of a $349 billion emergency small business lending programme (SBA), reported Bloomberg.

Personal appeals to the White House adviser, seeking guidance and higher interest rates, were reportedly made by officials at Bank of America Corp, as well as smaller and regional institutions, according to three anonymous sources familiar with the calls, cited by the publication.

The outreach is suggested as having taken place over efforts within the financial sector and presidential aides to implement the Paycheck Protection Programme, a key component of the $2.2 trillion stimulus package signed into law last week.

Ivanka Trump is cited as being involved in efforts to render the programme appealing for the community banks by ensuring that small businesses make applications through regional banks the latter already have banking relationships with.

The sources suggest the lobbying has been partially effective, with Donald Trump’s eldest daughter conveying to the Treasury Secretary Steven Mnuchin, as well as officials, their urgency for higher interest rates on the government-backed loans, encouraging greater participation of community and regional banks.

In a move perceived as offering greater financial incentive for the smaller community banks, who earlier bemoaned their disadvantage in comparison to larger institutions which could raise money more cheaply, on 2 April Steven Mnuchin announced the government would hike interest rates to 1% from 0.5% on the emergency loans.

The move was accompanied by processing fees on loans the federal government was already absorbing. Mnuchin was quoted as saying on Thursday:

“I’ve told these bankers they should take all their traders and put them in the branches. There’ll never be another opportunity to earn five points on a 90-day fully government-guaranteed loan. To make this attractive for community banks, we’ve agreed to raise the interest rate.”

Ivanka Trump is also said to have tasked aides to coordinate with the SBA over an inundation of requests linked to the coronavirus.
Her husband and White House adviser Jared Kushner has been closely working with private industry representatives and family friends on issues pertaining to the COVID-19 pandemic and the crisis it has spawned.

In a tweet, Donald Trump thanked the institutions that had reached out to his daughter on behalf of small businesses.

Great job being done by @BankofAmerica and many community banks throughout the country. Small businesses appreciate your work!

​The US government’s aid programme, which offers up to $10 million in loans to companies employing fewer than 500 people who refrain from layoffs and meet certain other requirements, had earlier raised questions as to whether the Trump administration was fully prepared to cover the massive loan project.

© REUTERS / EDUARDO MUNOZ
A face mask used to protect from the coronavirus disease (COVID-19) is seen on the ground near Trump Tower in New York City, New York, U.S., March 14, 2020

Additional guidance was vocally sought by banks such as Wells Fargo and US credit unions, with some small business owners reporting error messages while attempting to file online loan applications. The White House dismissed speculations of hurdles facing the programme, with SBA Administrator Jovita Carranza tweeting at 3 p.m. New York time that there had been 6,820 loans valued at $2.2 billion.

The COVID-19 relief seeks to prevent an economic freefall due to the impacts of the pandemic, extending a lifeline to businesses and local governments, while also providing direct payments to qualifying Americans, despite concerns from banks like JPMorgan Chase that they would not be in a position to deliver the aid as projected.

"We need to get money to small business and American workers, and that's what we're doing."

Ahead of Friday’s launch of the Paycheck Protection Programme, banks had voiced both technical and operational concerns, with the latter pertained to issues such as verifying borrower information and the liability protections they would get during the process of rapidly issuing loans.

On Thursday, Mnuchin said that there was now an unprecedented $6 trillion to prop up the US economy amid the outbreak. The relief programme is designed for about ten weeks, with the administration potentially able to seek additional liquidity from Congress if needed, added Mnuchin.

The spreading coronavirus epidemic continues to wreak havoc on businesses and livelihoods, as according to the Johns Hopkins University, there are more than 277,965 confirmed cases of the novel coronavirus in the United States currently, and more than 7,157 deaths.

What’s Inside the US Senate’s $2-Trillion Coronavirus Aid Package?