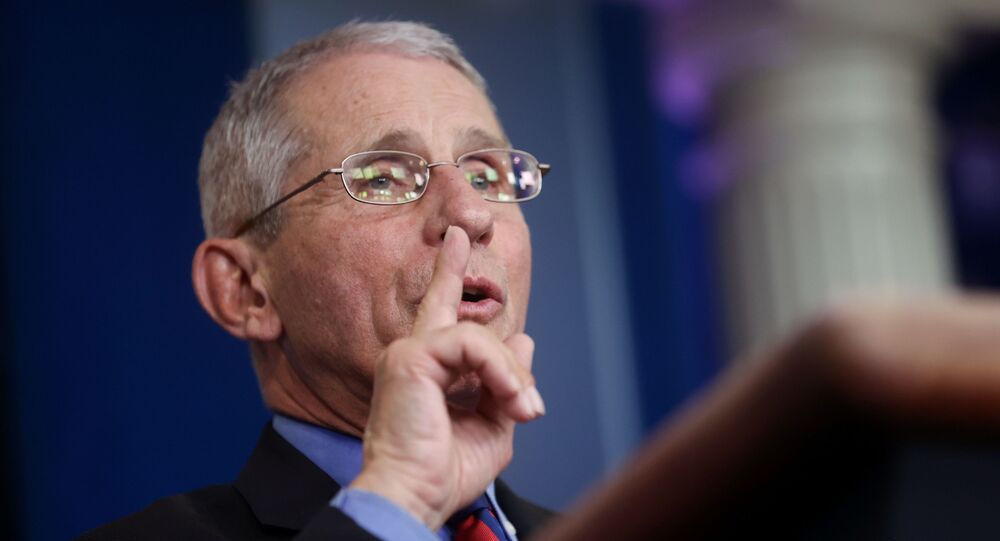 President Trump tapped Dr. Fauci to help lead the White House Coronavirus Task Force in January, but he has gotten into occasional highly-publicised conflicts with the president regarding the proper response to the pandemic.

Immunologist Dr. Anthony Fauci, America’s ‘leading expert on infectious diseases’, has been given a beefed-up security detail, including at his home, amid threats against him, multiple unnamed sources said to be familiar with the matter have told The Washington Post.

The sources did not name the specific threats said to have been made against the doctor, but said that Fauci’s national stature and censure of the president on the handling of the pandemic has made him a target for criticism among Trump supporters.

According to the Post’s sources, the Department of Health and Human Services (HSS) recently tapped the Marshals Service to provide Fauci with “protective services”. The deputy attorney general reportedly approved the measure on Tuesday.

In a press conference at the White House on Wednesday, Fauci said he “wouldn’t comment” on whether his security was being increased, referring reporters to the HSS. President Trump jumped in, saying that Fauci “doesn’t need security” because “everybody loves him…Besides that, they’d be in big trouble if they ever attacked.” Trump recalled Fauci’s amateur athletics career, including his position as captain of his high school’s basketball team in 1958.

Reporter asks if Dr. Fauci or Dr. Birx have received any threats and if they have security
Trump: “he doesn’t need security everybody loves him .... you know he was a great basketball player ... a little on the short side for the NBA but he was talented” pic.twitter.com/Noow4luvZo

An HSS spokeswoman told reporters that she could not confirm whether security services were being provided for Fauci.

Dr. Fauci’s willingness to challenge the president, including on the idea that the US lockdown measures might end by Easter, have gotten him praise from Trump’s critics, who have plastered his face on all sorts of merchandise, from cupcakes and doughnuts to prayer candles, but also criticism from some of the president’s supporters, with the physician accused of undermining the commander-in-chief, and even of serving as a ‘deep state’ operative allied to Hillary Clinton.

Fauci himself has condemned the media for their alleged attempt to create a rift between him and the president, saying he “wish[ed] that would stop because we have a much bigger problem here than trying to point out differences,” and that “there really fundamentally at the core are no differences”.

Earlier this week, Fauci urged the administration to continue lockdown measures, notwithstanding the mounting economic and social effects, saying “now is the time, whenever you’re having an effect, not to take your foot off the accelerator - and on the brake, but to just press it down on the accelerator”. According to his estimates, the US could suffer between 100,000 to 240,000 fatalities from the coronavirus, even if the US follows existing health guidelines. President Trump said his administration is taking steps to ensure that the death toll remains below 200,000.

The urgency of the US response to COVID-19 became apparent last week, when America surpassed China and Italy to have the highest number of reported cases. According to Johns Hopkins University, the United States now accounts for some 216,700 of the world’s estimated 942,000 cases, with the virus making its presence known in every state. Over 5,100 Americans are thought to have died from COVID-19-related complications.