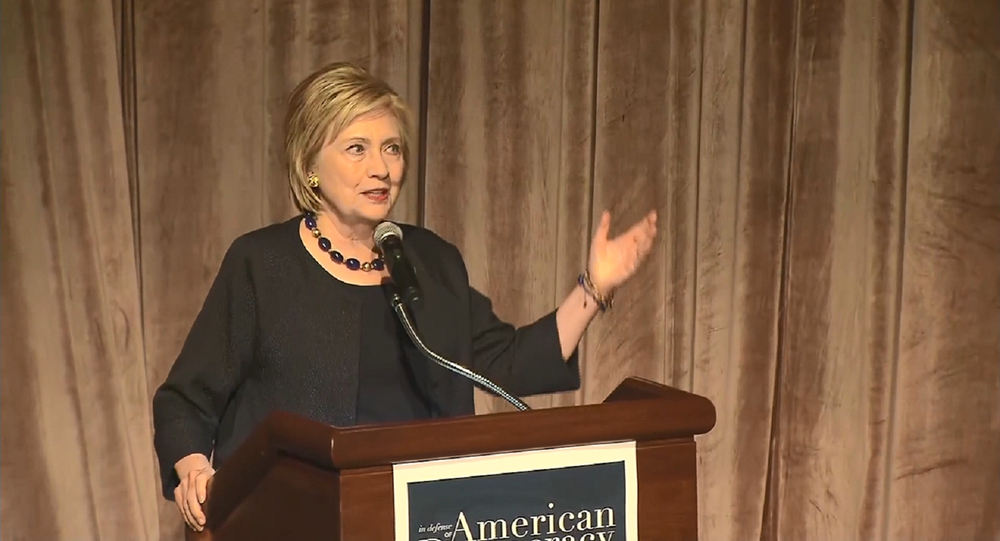 ‘Now isn’t the Time to Do That’: US Congressman Again Slams Hillary Clinton Over Her Trump Jab

On Friday, Hillary Clinton shared a recent report from The New York Times about the US now leading the world in the number of confirmed COVID-19 cases, tweeting that President Trump “did promise ‘America First’".

Texas Republican Congressman Dan Crenshaw has again berated former US Secretary of State Hillary Clinton for her jab at President Trump over his grappling with the coronavirus crisis.

"One of the things I talk a lot about is outrage culture and this newfound issue where we find the worst of each other, and we question each other's intentions, and that happens all the time in politics... but now is not the time to do that", Crenshaw told Fox News on Sunday.

He added that with the COVID-19 pandemic persisting, “somebody like Hillary Clinton is so used to taking political jabs at the president or her political opponents any time there's an outcome that is unfortunate, but this isn't the time”.

According to Crenshaw, the pandemic is “a tragedy for all Americans and the entire world”.

The remarks come after he tweeted on Friday that “this can’t be the new normal, where American tragedy is applauded for the sake of political opportunism”.

Delete your account. This isn’t the time. This can’t be the new normal, where American tragedy is applauded for the sake of political opportunism. https://t.co/7aYatlS8jV

Grenshaw responded to Clinton sharing a New York Times (NYT) report on the US currently leading the world in the number of confirmed COVID-19 cases, tweeting, “he [Trump] did promise ‘America First’".

The former Democratic presidential hopeful was apparently referring to a slogan that is often chanted at Trump rallies and which was part of his election promise ahead of the 2016 presidential polls.

On Thursday, the NYT reported that with at least 81,321 confirmed cases, the US had become the country hardest hit by the coronavirus pandemic, overtaking China and Italy.

Trump, for his part, insisted during the Thursday news briefing that the situation is “a tribute to the amount of testing that we're doing” and that "you don't know what the numbers are in China”.

He went even further by saying that the American people “have to go back to work, […] our country is based on that and I think it's going to happen pretty quickly”.

The statement, however, was followed by an about-face on Sunday, when Trump announced the prolongation of federal guidelines on social distancing for another 30 days after the government's top infectious disease expert warned that US deaths from the coronavirus could reach 200,000 with millions of infections.

“The better you do, the faster this whole nightmare will end. Therefore, we will be extending our guidelines to April 30th to slow the spread”, Trump underscored.

According to the US Centres for Disease Control and Prevention (CDC)’s latest information, there are more than 122,600 confirmed coronavirus cases in the country, with the death toll standing at 2,112.