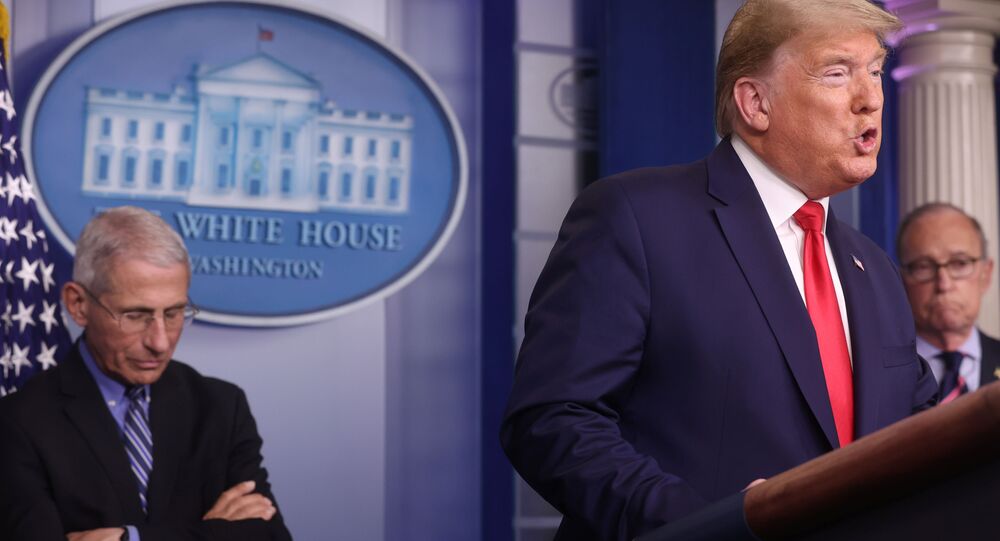 On Friday the US President appeared to mock Republican Senator Mitt Romney who had revealed he was taking advice on self-isolation after coming into contact on Friday with senator Rand Paul, who announced on Sunday that he had tested positive for the COVID-19 virus.

This is really great news! I am so happy I can barely speak. He may have been a terrible presidential candidate and an even worse U.S. Senator, but he is a RINO, and I like him a lot! https://t.co/42zpWW9vzy

​Nevertheless, the President didn’t pass up an opportunity to take a swing at the senator, as he added:

"I am so happy I can barely speak. He may have been a terrible presidential candidate and an even worse US Senator, but he is a RINO, and I like him a lot!”

Netizens weighed in on Trump’s tweet, with some congratulating the senator on receiving such heartening news, as they called Trump out for “inept governing” over the pandemic.

Stop with the sarcasm.

Mitt Romney at least has one testicle. You can’t admit when you’re wrong. Have little to no skin for insults. Inept with policy and governing. I in fact am really thankful you have not gotten Coronavirus. You saw how infectious this was in China. We should have acted in Feb.

​Some netizens deplored the sarcasm they perceived in his comments.

Sarcasm requires duality of mind, the ability to see two sides of something simultaneously. This is not a trait trump has demonstrated to date.

Over 150 innocent people died from #coronavirus yesterday in the USA. but so-called President is irresponsibly making jokes about it. 😳 #Shameful

​Supporters of Donald Trump rejected accusations of “fake media” and applauded his “handling of the coronavirus epidemic”.

As hard as the FAKE NEWS MEDIA is trying to spin it...

The American people see the truth and they overwhelmingly support @realDonaldTrump’s handling of the Coronavirus ‼️‼️‼️ pic.twitter.com/KqAmdWZKEf

Trump can do whatever he wants the "Left" is a bunch of American, hating, babies!!

​Earlier this week, the US President had sarcastically responded to news that Senator Romney was under self-quarantine after being exposed to the disease by quipping: “Gee, that’s too bad,” when told at a White House briefing that the politician was one of several self-isolating.

After a reporter then asked Trump: “Do I detect sarcasm there?”, the President responded:

The Utah senator and former presidential nominee was the sole Republican senator to vote for Donald Trump’s conviction on alleged abuse of power, one of the two charges during the President’s impeachment trial earlier in the year.