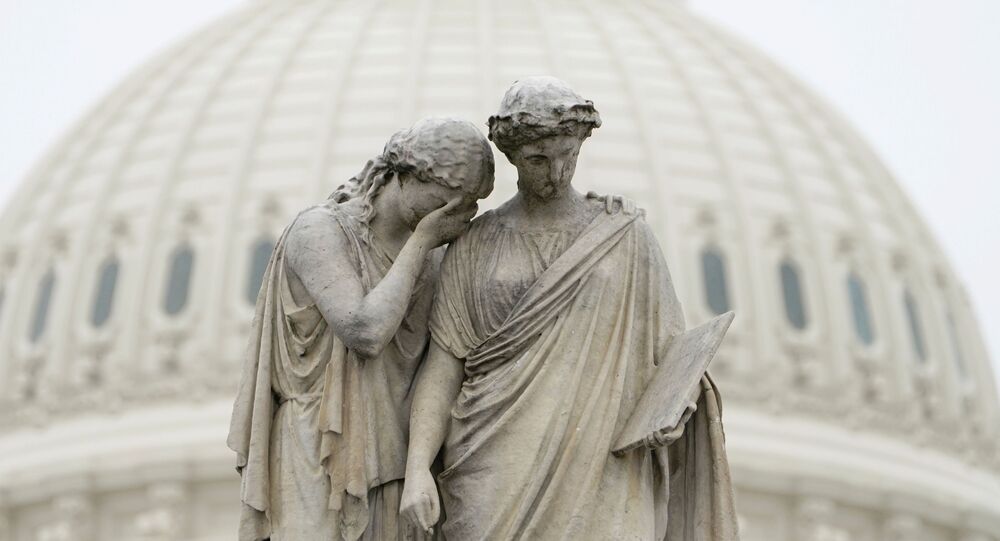 It has been a sleepless night for US legislators working on a massive bill to bring some relief to businesses and workers who have taken an economic hit due to the coronavirus pandemic. After two days of partisan infighting in the Senate, the two parties are said to be nearing a compromise.

The Democrats and Republicans are set to roll out on Tuesday a historic coronavirus emergency aid package following two days of stalled talks on Capitol Hill.

On Sunday and Monday, the Democrats blocked Senate votes on a $1.8-trillion Republican proposal; they accused the GOP of seeking to provide financial assistance to big businesses without enough congressional oversight and, overall, of caring too much about corporations and too little about workers.

House Speaker Nancy Pelosi soon unveiled her own proposal, worth $2.5 trillion, which was dubbed by Republicans as a “socialist wish list” and an attempt to exploit the pandemic to push forward unrelated points on the Democratic agenda, such as union giveaways and expanded environmental protection measures.

However, Treasury Secretary Steven Mnuchin, who has been negotiating the package, expressed optimism after talks on Capitol late Monday that it “could be closed out tomorrow.”

Senate Minority Leader Chuck Schumer told reporters that he felt there has been “a lot of progress” in the negotiations. “There's still a couple of open issues, but I think we’re very hopeful that this can be closed out” on Tuesday.

“We expect to have an agreement tomorrow morning,” he said. “There’s still a few little differences. Neither of us think they’re in any way going to get in the way of a final agreement.”

What concessions did Republicans make?

NBC News reports, citing aides from both sides of the aisle, that Republicans have agreed to make some concessions on the package. Those apparently include unemployment insurance and an increase in funding for hospitals.

Republicans had earlier agreed to boost insurance payments by $250 billion on top of the $250 billion in direct payments from the Internal Revenue Service to individuals under their initial plan. Their version of the bill would also allocate $75 billion for hospitals, compared with Pelosi’s $150 billion proposal.

The House Speaker told CNBC on Tuesday that “there is real optimism that we could get something done in the next few hours”.

Pelosi said Republicans had agreed to for an inspector general and a congressional panel of five people to oversee the aid given to businesses out of the Treasury’s $500 billion loan programme for distressed industries. She added she felt that the new changes have shifted the bill “sufficiently to the side of workers”.

In a Tuesday morning tweet, President Donald Trump urged Congress to approve the deal “without all the nonsense, today.”

“The longer it takes, the harder it will be to start up our economy,” he wrote. “Our workers will be hurt!” he wrote amid reported frustrations about the economic havoc caused by businesses shutting down across the country.”

Congress must approve the deal, without all of the nonsense, today. The longer it takes, the harder it will be to start up our economy. Our workers will be hurt!

Congress has been under mounting pressure to provide financial assistance and incentives to the economy as businesses lay off workers and shut down due to the coronavirus pandemic. More than 42,000 people have tested positive for COVID-19 in the United States, with the death toll surpassing 500 on Monday.