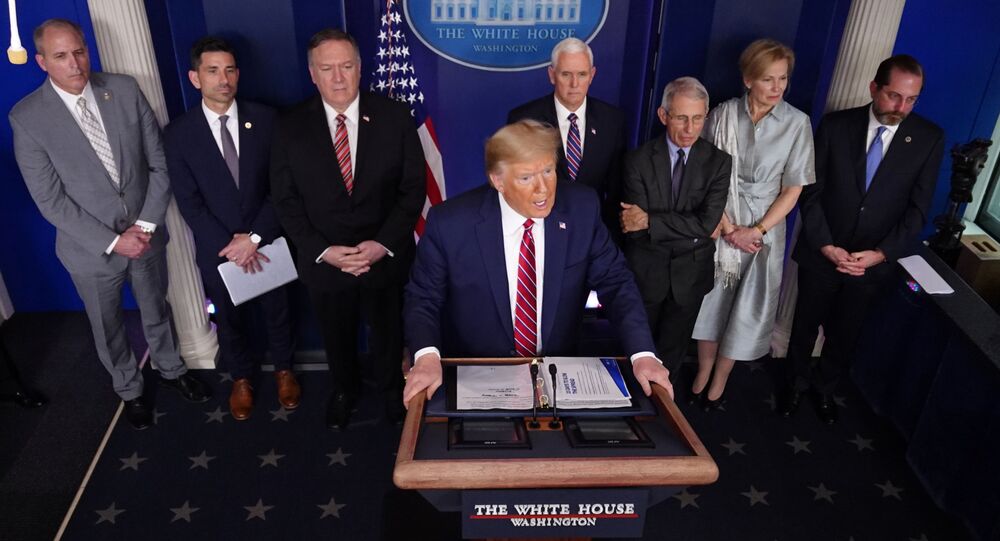 The development comes after Trump was criticized after he touted an anti-malaria drug, which has not yet been approved by the US Food and Drug Administration, as a cure for COVID-19. A number of health officials, including Dr. Anthony Fauci, questioned the president’s statement and said there is no proof that the medicine would work.

Anthony Fauci, director of US National Institute of Allergy and Infectious Diseases, said he doesn’t want to embarrass President Donald Trump when he contradicts him on the outbreak of coronavirus in the United States, the official said in an interview with the New York Times, adding he just wants to get “the facts out.”

"I don’t want to act like a tough guy, like I stood up to the president. I just want to get the facts out. And instead of saying, 'You’re wrong,' all you need to do is continually talk about what the data are and what the evidence is," Fauci said in an interview with the New York Times.

Fauci acknowledged that he has been telling Trump things “he doesn’t want to hear”, but stressed that the president does not interpret the information as an attempt to be confrontational but rather perceives it in a good way.

"I have publicly had to say something different with what he states. It’s a risky business. But that’s my style. I say it the way it is, and if he’s gonna get pissed off, he’s gonna get pissed off. And he gets that. He’s a smart guy. He’s not a dummy. So he doesn’t take it — certainly up to now — he doesn’t take it in a way that I’m confronting him in any way. He takes it in a good way."

Commenting on Trump’s recent statement about an anti-malaria drug that could be used to treat coronavirus, Fauci said there’s no definite proof that it would work.

"I'm not totally sure what the president was referring to," Fauci told reporters during the latest press briefing. "But I believe he was referring to a report that used both hydroxychloroquine and azithromycin together to have some possibility of being an effect. Many of the things out there are what I have called 'anecdotal reports.'”