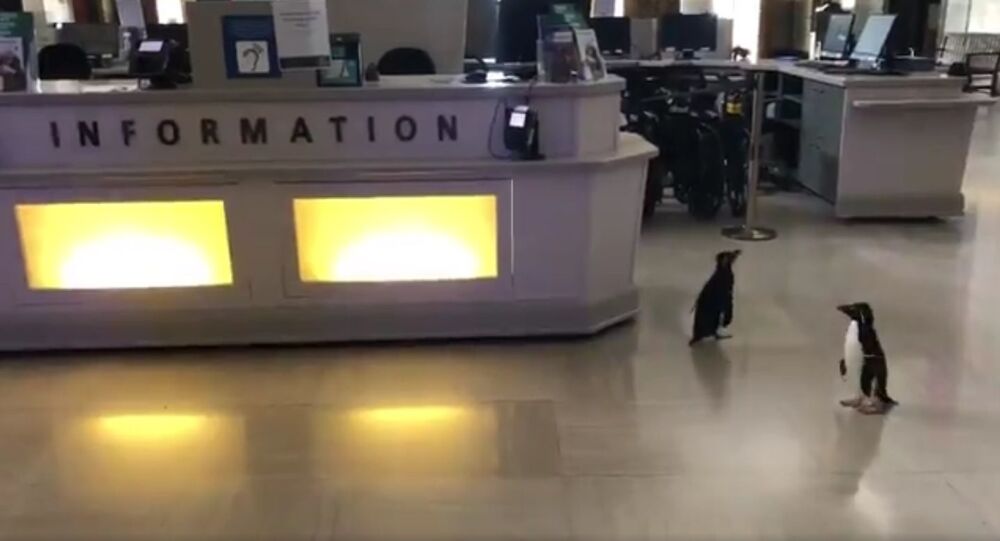 The Surprise Beneficiaries of COVID-19 Lockdown? Penguins in Chicago

Perhaps for the first time in the species’ history, penguins were the visitors and not the attraction in an aquarium, after it was closed to the public amid the coronavirus outbreak.

Animal residents of the Shedd Aquarium in Chicago have had a chance to check out the place and get familiar with their neighbours under supervision.

The venue, which is on a two-week shutdown through 29 March, has posted hilarious videos of penguins wandering around and staring at fishes on a rare “field trip”.

“Our caregivers are constantly providing new activities, experiences, food and more to allow the animals to express natural behaviors,” the aquarium said in a Twitter post, “even if that includes simply exploring.”

Penguins like Edward and Annie will begin to build their nests next week. Join us digitally for nesting coverage! In the meantime, we will be sharing lots of different animal updates (and yes, Wellington will return!) 🐧👀 (2/3) pic.twitter.com/eCYKOwdOMz

Chicago authorities last week banned public gatherings over 1,000 people until mid-April and asked that those over 250 also be postponed. On Monday, Illinois Governor J.B. Pritzker went further and ordered gatherings of 50 or more to be canceled, in line with CDC recommendations. All schools in the state will be shut down until the end of March, and all restaurants and bars will be closed for dine-in customers.

While this may be a strange time for us, these days feel normal for animals at Shedd. Our caregivers are constantly providing new experiences for the animals to explore and express their natural behaviors with. Let us know what penguin activities you would like to see! (3/3) pic.twitter.com/ftlow7iPHl

Meanwhile, thousands of people will go to polls as Illinois is holding Democratic primaries on Tuesday. Four states will be voting today but Ohio was the only one to postpone the primaries.

The first case of COVID-19 in Illinois was confirmed on 24 January when a woman returned from the epicentre of the outbreak in Wuhan, China. There have been 105 cases, but no deaths, reported across the state as of Monday, compared with more than 4,000 cases and 85 deaths nationwide.