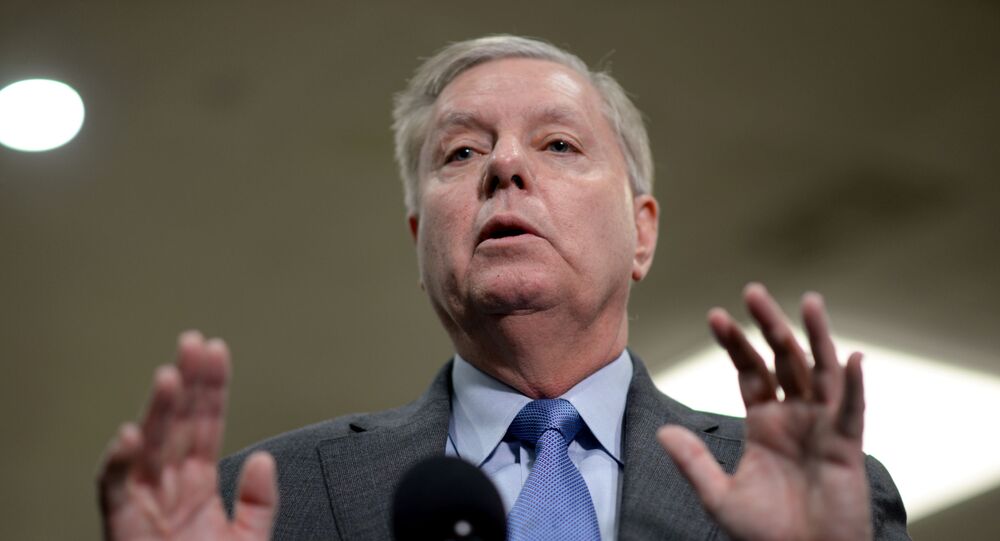 While awaiting test results after his in-person meeting with a coronavirus-infected official, Lindsey Graham announced that he would self-isolate as a “precautionary measure”, but would continue to work from home.

US Senator for South Carolina Lindsey Graham, who self-quarantined on 12 March after a member of Brazil’s delegation whom he had met days earlier tested positive for the virus, has drawn harsh criticism on Twitter after he received a care package from the First Couple.

Can’t wait to get back to work with the President and my Senate colleagues to contain coronavirus and stabilize the economy.

We will get through this together! 🇺🇸 🇺🇸 🇺🇸 pic.twitter.com/eFUFWBG8iZ

“Is your spine in one bag and your dignity in the other?” one asked, as a great many rushed to outline the issues that the US healthcare system is currently facing while the senator received “a gift":

Isn’t that lovely. We have people hoarding, unavailAble testing, seniors without assistance, and workers worried. But everything is ok cause you got a gift from the liar and his nude model wife.

Thanks to McConnell the Senate hasn't approved the #FamiliesFirst bill yet. So great you have a care package! 😩 If only Americans could get tested & get the services they desperately need! #McConnellisaDisgrace #FamiliesFirstBill #CoronaviriusPandemic #ToxicTrump #GOPFail pic.twitter.com/xgPBQXiuMR

Why do you need a care package? Whatever it is, it could have been sent to the needy not the greedy.

“Why are the government’s higher up’s the only people the tests are readily available to???” one fumed.

Another promptly waded in bringing up the ubiquitous shortage of toilet paper across the country:

Wait til he gets diarrhea a d runs out of toilet paper and can’t find any!

“And wait 'the president's house' has pre printed embossed cards that say 'get well'? kinda weird huh!” some Twitterian posted, picking up on the postcard wish.

“Lol don’t be jealous”, a different user opted to ease up the tension, addressing the angry remarks.

“Please stay away”, another tweeted with regard to the senator’s continued self-quarantine, whereas another recalled Graham’s earlier words about President Trump, which, he apparently implies, are out of whack with him accepting the POTUS family’s token of well-wishing.

Make-up and a new dress? pic.twitter.com/8fTnIDJLFy

The senator’s Democratic rivals and their sympathisers are eagerly taking advantage of his self-isolation, posting taunting remarks:

@LindseyGrahamSC
Feel better and stay home. We don't want you back. Start you inevitable early retirement.

You abandoned your country on a golf course.#ShutUpLindsey#SendLindseyHome
Vote @harrisonjaimehttps://t.co/YjZlKpyYo5

Isn’t it nice the American people pay your salary and for your health insurance. I for one feel gypped and want a refund. #VoteOutLindsey

Can't wait to see you kicked out on November 3!

Some netizen meanwhile assumed the coronavirus “hoax” was  Democratic, openly wondering why only Republicans “have to self-quarantine:”

Why are only Republicans testing positive or having to self quarantine? I thought it was a Democratic hoax!

It recently emerged that on 5 March, the South Carolina senator met with Australia’s Minister of Home Affairs Peter Dutton and Australia’s Ambassador to the United States Arthur Sinodinos in Graham’s Washington office. On Friday, officials announced that Dutton had tested positive for the infection.

The Republican senator and former Air Force Reserve colonel also reportedly came into contact with the president of Brazil, who took a corona test, and his spokesman, who tested positive for the infection, but according to the Graham team’s statement, he “has no recollection” of “direct contact” with them. However, by way of precaution, Graham has since isolated himself while awaiting his own test results.

There are at least 2,816 COVID-19 cases registered across America. At least 58 people have died, with most of the fatalities in Washington state.

Trump declared a state of emergency in the United States on 13 March, with the White House vowing to free up about $50 billion in disaster relief funds to effectively curb the virus’ spread.

On Wednesday, the WHO officially declared the COVID-19 a pandemic, with governments around the world strongly recommending that people avoid packed crowded spaces and pay increased attention to standard hand and facial hygiene.

Trump Wants to Deliver State of the Union Address ‘With Impeachment Trial Behind Him’, Graham Says

Lindsey Graham Says He Will Vote Against Subpoena of Hunter Biden