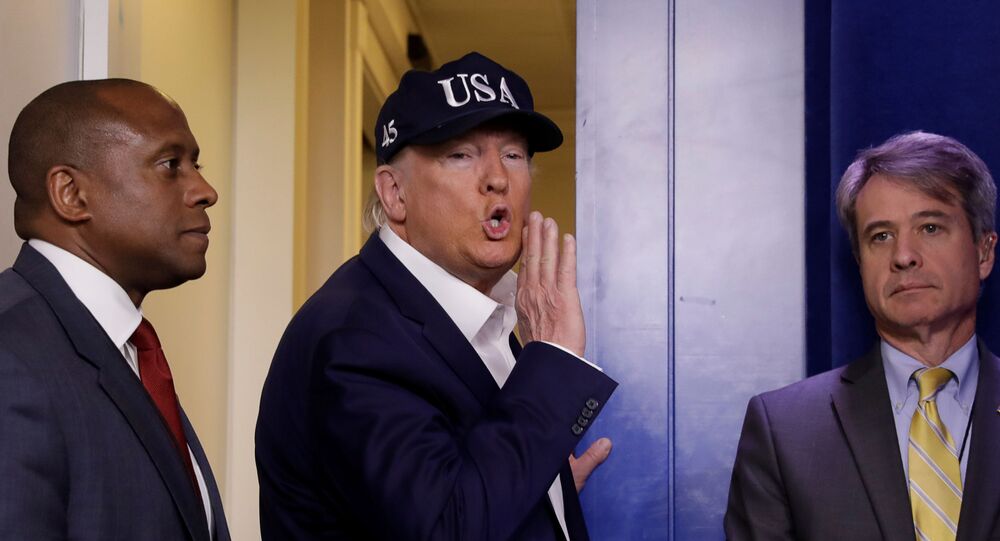 Trump repeatedly lashed out at the US Federal Reserve in 2019 for not doing enough in terms of cutting interest rates, arguing that the high rates were damaging the American economy more than the alleged discrepancies in trade with China.

Speaking at a presser on the coronavirus threat, President Donald Trump switched to the topic of the economy, saying that he would like to refinance the US national debt, which currently exceeds $23.3 trillion.

POTUS also used the opportunity to castigate Chairman of the Federal Reserve Jerome Powell, arguing that he had made some "bad decisions". The president pointed out that he has the power to remove Powell from his post, but immediately clarified that he is not making that move at this time.

He also lashed out at the Fed as a whole, claiming that they "are not doing what they should be doing" - namely lowering the interest rates. Trump stated that the US should not have interest rates higher than its "competitor-nations", bringing up Germany's negative rate as an example.

On Countering the Coronavirus Threat

The US president shared some updates on Washington's strategy to combat the COVID-19 outbreak during the presser, saying that the UK and Ireland, which were previously exempt from the travel ban, would now be included in it. Vice President Mike Pence clarified that the measure will come into effect on Monday.

POTUS also expressed his support for the voluntary actions of the American private sector to prevent the coronavirus from spreading, such as closing retail shops, which Apple did on 14 March. He called on other businesses to follow the Cupertino-based tech firm's suit.

© REUTERS / David Ryder
Medics transport a man on a stretcher into an ambulance at the Life Care Center, a long-term care facility linked to several confirmed coronavirus cases, in Kirkland, Washington, U.S. March 3, 2020

Following weeks of refusing to take a test for coronavirus infection, claiming that he was absolutely healthy, President Trump acknowledged that he had finally taken a test without elaborating on what prompted him to change his mind. He said that the results will become available in a day or two, but noted that he had a normal temperature when it was checked upon his arrival at the presser – a procedure that all journalists had to go through too.

Notably, the apparent shift in Trump's attitude took place after it turned out that a member of a Brazilian delegation that POTUS met last week had tested positive for the coronavirus.

According to Trump's top epidemiologist, Anthony Fauci – the director of the National Institute of Allergy and Infectious Diseases, some 2,226 people have contracted COVID-19 in the US, with 532 cases registered in just the last day. Trump, in turn, mentioned that some 50 American citizens have already died due to the virus.

We have not yet reached our peak. Now, we will see more suffering and death predominantly … among the vulnerables in our society", Fauci said.