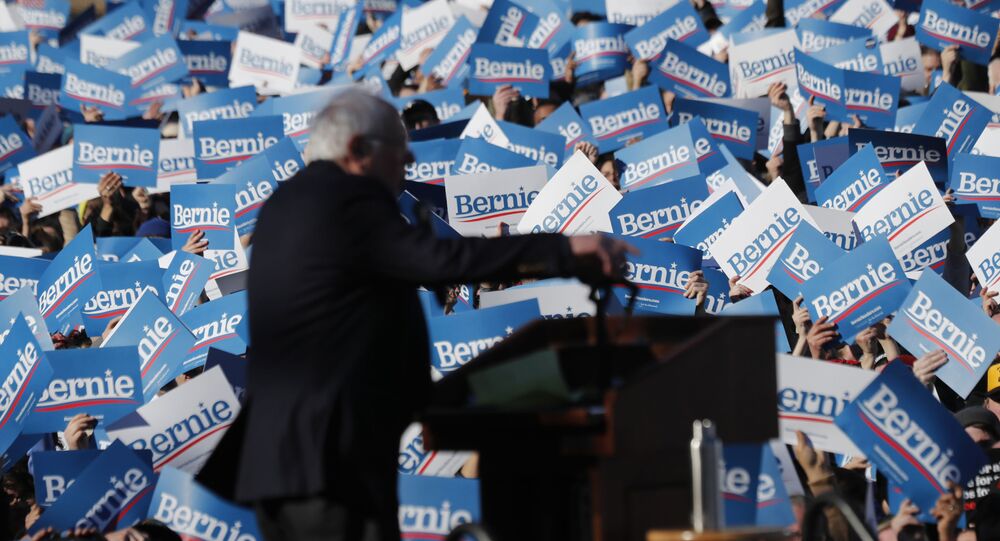 Bernie Sanders, once a front-runner in the Democratic presidential race, has seen his favourability ratings tank in the wake of the Super Tuesday primaries, prior to which Joe Biden received vital endorsements from his fellow moderate candidates.

US President Donald Trump apparently believes that the system of alliances in the Democratic Party is being unfair towards its most left-wing presidential candidate.

“We have now learned for sure that the Democrats don’t want anything to do with Crazy Bernie,” Trump tweeted on Sunday, referring to Vermont Senator Bernie Sanders.

He recalled that millennial mayor Pete Buttigieg and Sen. Amy Klobuchar, two moderate candidates, had both dropped out of the race on the eve of the crucial Super Tuesday primaries and endorsed Biden.

.....least 5 States & the Nomination. Did the DNC & Dems tell Elizabeth Warren to wait? If so, they were deadly, the race would have been over, & Bernie would have won. Dirty double dealing? Nobody knows for sure, & history will be the judge. But I say, here we go AGAIN, Bernie!

This significantly improved the former vice president’s chances in Tuesday’s contest, which awarded one third of all delegates to the party’s national convention, adding up to the momentum he gained after a strong showing in South Carolina (a state with a predominantly black electorate).

With Biden consolidating the moderate wing behind himself, the progressive vote was split between Sanders and Elizabeth Warren. Despite poor performance in the early contests and polls signalling a tough Super Tuesday, Warren banked on that day and came in no better than third in any state, even losing in her native Massachusetts.

The 70-year-old senator, who had stood out in the crowded Democratic field since the very start of the race, suspended her campaign on Thursday. She did not immediately endorse either Sanders or Biden.

“Did the DNC & Dems tell Elizabeth Warren to wait?” Trump inquired. “If so, they were deadly, the race would have been over, & Bernie would have won.”

“Dirty double dealing? Nobody knows for sure, & history will be the judge. But I say, here we go AGAIN, Bernie!” he added, referring to Sanders’s 2016 defeat by Hillary Clinton.

On 10 March, the Democratic Party will host a ‘mini-Super Tuesday’ of sorts – a series of six primaries and caucuses in Idaho, Michigan, Mississippi, Missouri, North Dakota and Washington. Michigan, where 125 pledged delegates are up for grabs, will be the top prize this Tuesday. As things stand, Biden has 664 delegates and Sanders 573.