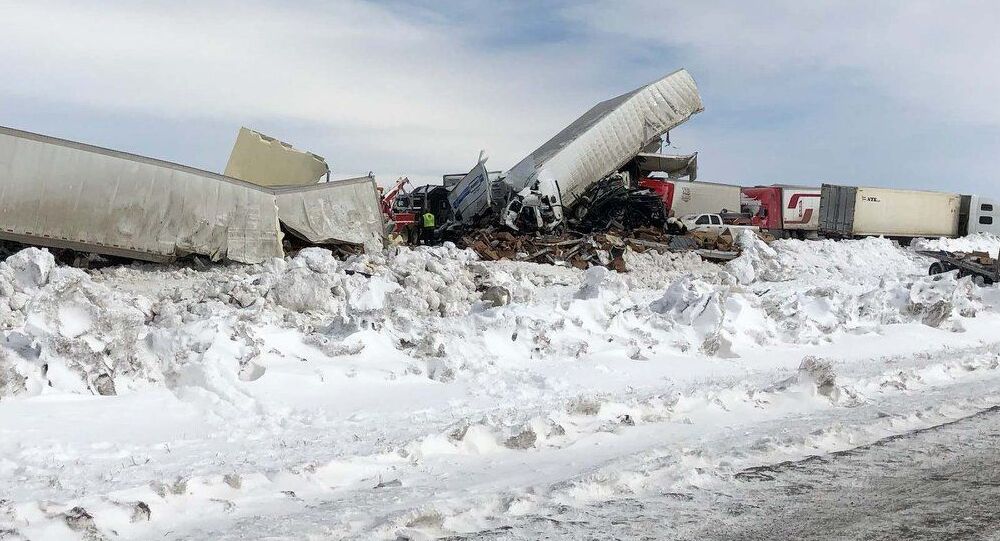 Video has emerged showing the beginnings of an estimated 30-car pileup that resulted in the deaths of three individuals and injured multiple people earlier this week in the US state of Wyoming.

The Wyoming Highway Patrol confirmed in a Thursday news release via Facebook that two commercial truck drivers and the passenger in a Toyota Highlander were killed in the mass pileup that took place on March 1, 2020.

The same day, YouTuber and Utah resident Linda Flores posted footage of the fatal pileup that took place on Wyoming’s snowy and icy Interstate 80 between the cities of Wamsutter and Rawlins.

Footage below contains strong language and depicts a scene that some may find disturbing.

“As we approached the incident we did not notice anything was wrong with the westbound lane because I was focused on the road ahead of me, until I noticed [a] large white van fly of the westbound road on its side,” Flores said in the video’s description on YouTube.

She also explained that while she could not phone 911 due to being unsure of her location, authorities arrived promptly to the scene shortly after she stopped recording.

“Driving too fast for road conditions and following too closely are being investigated as the leading cause of the crashes,” the Wyoming Highway Patrol said in their March 5 post. “Roadways were very icy with snowfall and blowing snow creating limited visibility at the time of the crashes.”

It was revealed that Carbon County Memorial Hospital in Rawlins treated approximately 30 individuals who were injured in the crash.

Early reports on the crash claimed that there were approximately 100 cars involved in the pileup, and the Wyoming Highway Patrol’s post reported that secondary crashes “involving around twenty-five vehicles occurred in front of this crash and within the stopped traffic.”

Though an exact number was not provided by the Wyoming Highway Patrol, they did estimate that 30 cars were involved in the fatal pile-up. Only injuries were sustained in the secondary crash.

Two US Airmen Found Dead in German Base Dormitory Room