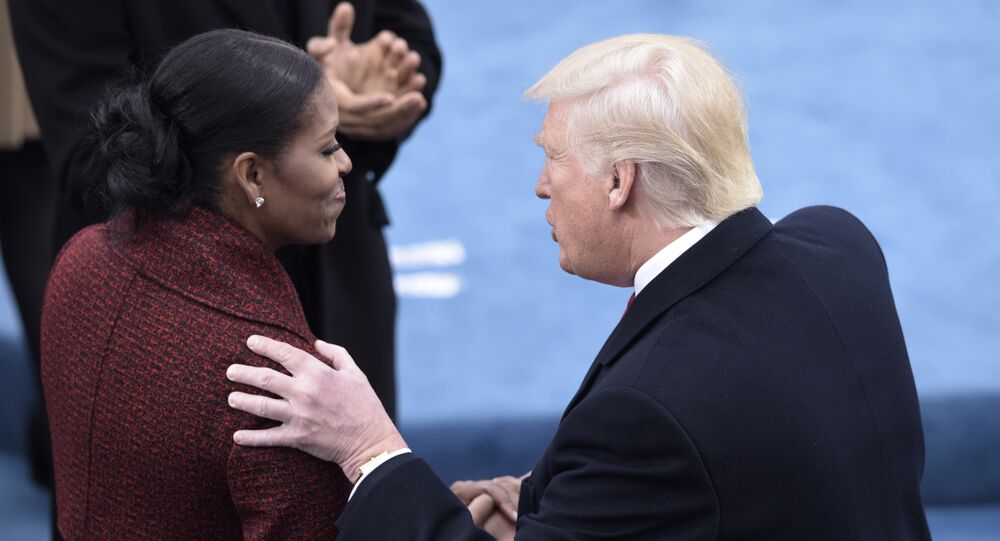 Michelle Obama actively campaigned against Trump in 2016, and is apparently aiming to double down on the effort, as the White House recently proposed to undo one of her social initiatives pertaining to healthier school menus.

Michelle Obama is prepared to hit the campaign trail later this month, in an apparent bid to challenge President Trump as she hosts a rally in Detroit, Michigan, a state that POTUS narrowly – by a mere half percent - won in 2016.

On 27 March, the ex-first lady will be talking to young voters at the University of Detroit Mercy, the bipartisan group she co-chairs - “When We All Vote” – announced in a statement. It will be the first rally this year for the organisation she launched along with a few celebrities including Tom Hanks in 2018, while the Dem primary in Michigan is slated for 10 March.

The Obamas need to quietly ride off into the sunset. They’ve both done enough to try to ruin America.

I can't wait to not be there. Probably the"Sticking it to Whitey" voter drive. 😀😀

Obama’s advocacy group targets and tries to inspire citizens reluctant to vote, calling for greater voter turnout in all elections, with Michelle expected to make it a key topic of her speech in Michigan, a priority state in POTUS’ re-election bid.

Nonpartisan my a$$. I only see leftist names on that list...

She is known to have publicly demonstrated her dislike for the president and is remembered to have actively campaigned against Trump in 2016.

Independently, Trump has occasionally directed verbal attacks at the Obama family. In a veiled jab last week, he attacked Democrats, including Michelle Obama and Hillary Clinton, for being “fans” of Harvey Weinstein at a presser on the heels of the disgraced mogul’s conviction.

“The people who liked him were the Democrats. Michelle Obama loved him, loved him. Hillary Clinton loved him”, he said while in New Delhi in response to a journalist’s question.

“I was never a fan of Harvey, as you know”, he said. “He was a person I didn't like. I knew him because he was in New York”, he proceeded.

Neither the Obamas, nor Clinton commented on the president's remarks, but back in autumn 2017, the former first couple fumed in a statement that they were  “disgusted” to learn of the sexual harassment allegations against the film producer, who is a major Democratic donor.

“Any man who demeans and degrades women in such fashion needs to be condemned and held accountable, regardless of wealth or status,” the Obamas said in the statement cited by the Daily Beast. Hillary Clinton, for her part, also spoke out against Weinstein, despite the latter having donated $5,400 to her presidential campaign.

The Obamas, meanwhile, are known to have regularly rubbed shoulders with Weinstein, as their eldest daughter Malia signed up for an internship at the now convicted rapist's production company in the summer of 2017. Earlier, during Barack Obama’s presidency, Michelle dubbed Weinstein “a powerhouse” and “wonderful” in 2013, years before multiple sexual misconduct allegation started to surface.