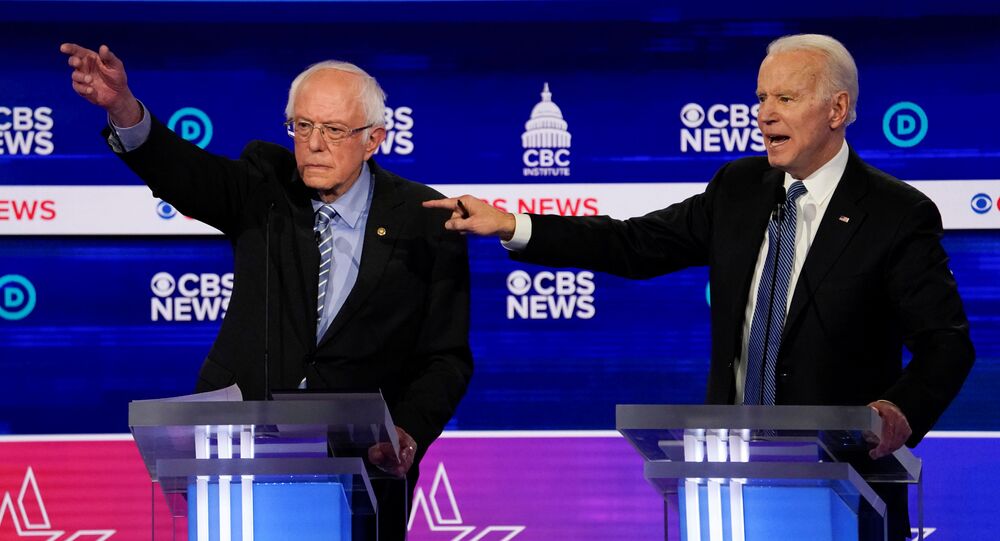 WASHINGTON (Sputnik) - US Senator Bernie Sanders and former Vice President Joe Biden had strong performances on Super Tuesday, clinching key states among the fourteen holding contests with the latter having a slight edge.

As of Tuesday, around 11:45 p.m. EST (4:45 a.m. GMT on Wednesday), with only Texas and Maine results pending, Biden is projected to win the Democratic primary contests in Virginia, North Carolina, Alabama, Tennessee, Oklahoma, Arkansas, Minnesota, and Massachusetts.

Sanders is poised to win in his home state of Vermont as well as California, Colorado, and Utah.

California is the biggest prize among the fourteen primary contests held on Tuesday with 415 delegates up for grabs. But the margin of Sanders' win is the crucial piece of information to truly determine who scored the most points on Super Tuesday in terms of delegate count.

With nearly 20 percent of precincts reporting, Sanders was leading the California primary with 27.3 percent of the vote followed by former New York City Mayor Mike Bloomberg with 19 percent and Joe Biden with 17 percent.

The New York Times reported that the Sanders campaign took legal action in Los Angeles County in the state of California to keep polls open for an extra two hours after reports of long wait times and voting machine problems.

© REUTERS / Elise Amendola
Bloomberg Grosses Out Twitter With His Pizza Eating Habits, Gets Roasted by Trump - Video
Bloomberg only secured a win in the US territory of Samoa. With partial results submitted among the Tuesday Democratic primaries, Biden is set to win at least 120 delegates and Sanders at least 112 delegates.

A candidate needs 1,991 delegates to win the Democratic presidential nomination.

As of late Tuesday in Texas, with nearly half of precincts reporting, Sanders leads with 28.8 percent to Biden’s 24.8 percent.

NBC News now has Biden and Sanders tied in Maine at 33.2 percent with 66 percent reporting.

US President Donald Trump in a statement said Bloomberg's campaign took the biggest loss in the Democratic primaries after a poor performance.

"The biggest loser tonight, by far, is Mini Mike Bloomberg", Trump said via Twitter on Tuesday. "His 'political' consultants took him for a ride. $700 million washed down the drain, and he got nothing for it but the nickname Mini Mike, and the complete destruction of his reputation".

As most of the nation closely followed the Democratic results, President Trump easily won a series of primary GOP contests on Super Tuesday. He was declared the winner in Alabama, Vermont, Oklahoma, North Carolina, Maine, and Tennessee, among other states, and was expected to win each of the states in the Midwest and along the west coast once polls closed later in the evening.