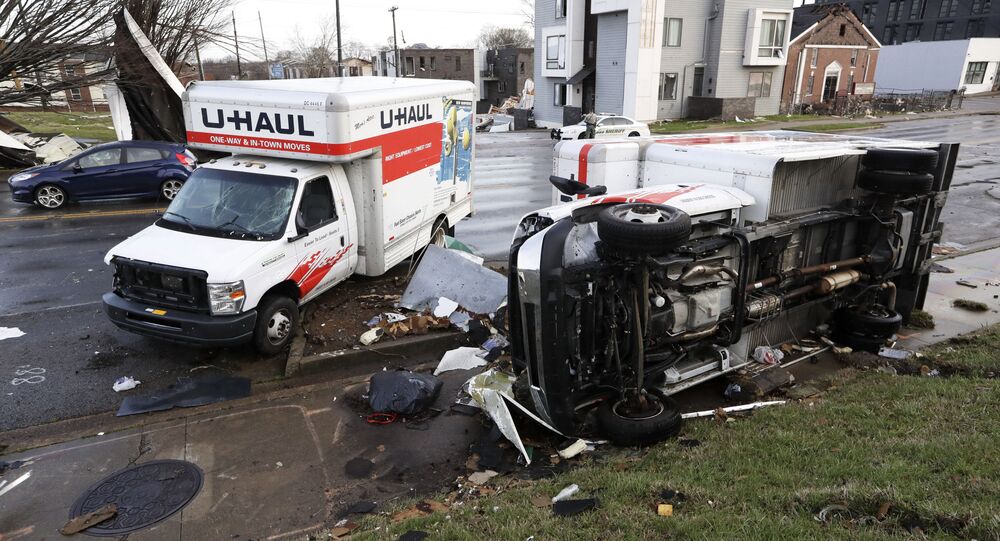 Tennesseans began a massive cleanup effort on Tuesday across the southern US state, hours after a powerful tornado carved a path of destruction through various neighborhoods and killed over a dozen individuals.

The latest figures by the Tennessee Emergency Management Agency indicate that the deadly tornado claimed the lives of at least 22 individuals and injured dozens of others. The Nashville Tennessean reported that the majority of those individuals were residents of the Volunteer State’s Putnam, Wilson, Davidson and Benton counties.

According to the Nashville Fire Department, at least 40 buildings collapsed in Nashville as a result of the deadly storm.

​Photos shared on social media document damages and the complete destruction of various structures in the city, such as the historic Hopewell Baptist Church and the Donelson Christian Academy.

​Additionally, multiple power lines were torn down during the weather event, leaving thousands of still-standing homes without electricity. Officials noted that roughly 50,000 customers are without power, CBS News reported.

​Warnings were first initiated at about 11 p.m. local time on Monday for Humphreys County by the Nashville hub of the National Weather Service, with a note indicating that radar had detected a tornado and that ping pong-sized hail was a possibility.

By 12:30 a.m. local time, the weather service had confirmed that a tornado had touched down near downtown Nashville. Follow-up tweets throughout the night from the agency repeatedly urged locals to seek shelter.

Footage recorded by Tennesseans during the episode captured the massive twister tearing through the state as powerful winds between 155 and 160 mph blew out windows and roofs and brought down trees, power lines and traffic signs.

​Dramatic footage of the moment the storm arrived in downtown Nashville was even captured by local station WTVF’s photojournalist Dan Blommel during an on-air broadcast.

​During a Tuesday news conference, Tennessee’s Gov. Bill Lee told reporters that the deadly tornado “was a reminder about how fragile life is.”

Lee further noted that state officials have been in contact with the White House, and that he would file for federal help once all damages have been accessed. US President Donald Trump is expected to visit Tennessee later this week.

Three Reportedly Dead as Tornadoes Tear Through US Southeast – Video