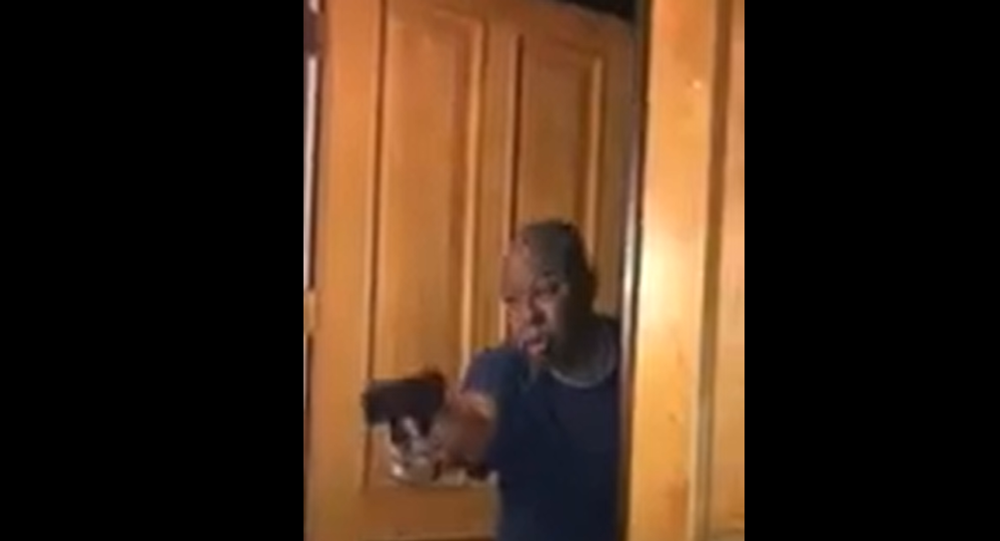 The husband of Los Angeles County District Attorney Jackie Lacey pointed a gun at Black Lives Matter (BLM) Los Angeles co-founder Melina Abdullah and several other activists on Monday when they congregated outside the prosecutor's home to request a community meeting.

Abdullah and around 30 activists gathered outside Lacey’s home on Monday, one day before the LA district attorney primary election, in which Lacey is running to retain the post she won in 2012. The BLM activists have been trying to meet with Lacey for over two years in an effort to discuss the number of civilians who have been killed by police during her time as district attorney, HuffPost reported.

“I’m going to shoot you,” David says, after repeatedly telling activists to “get off [his] porch.” The video cuts off after David informs protesters that he intends to call the police.

According to the activists, they chanted “Jackie Lacey must go, Jackie Lacey will go” for about two hours following their exchange with David. Police officers eventually showed up and escorted the district attorney out of her home, Abdullah told HuffPost.

Since Lacey was first elected to the district attorney position in 2012, the Los Angeles native has only prosecuted one case against a police officer for killing a civilian, although more than 500 people have died due to law enforcement violence in that time, the Huffington Post reported.

When asked if she will file a police report over David’s death threats, Abdullah told the Post that Lacey “protects the police and the police protect her.”

“As with any incident, LAPD [the Los Angeles Police Department] will first investigate and if appropriate bring to an independent prosecutor’s office for review. The California Attorney General’s Office will assist LAPD in this matter,” Shiara Dávila-Morales, chief of media relations for the district attorney’s office, told the outlet.

However, according to Kate Chatfield, the advocacy organization Justice Collaborative’s senior adviser for legislation and policy, David’s actions may be considered “serious felonies” under California law, the Post reported.

Hours after the incident, Lacey told reporters at the Hall of Justice in downtown Los Angeles that a large group showed up outside her home before the sun had even risen.

“This morning my husband and I were at home asleep when we began to hear noise outside of our home. We immediately jumped out of bed, and I called the police. I wasn’t sure what was going on, and I let them know I thought there were protesters outside of my house,” Lacey told reporters, NBC News reported.

"My husband David and I have been married for almost 40 years, and while I was upstairs, he ran downstairs. I could hear him talking to somebody. He came back up later, and he said, 'There are protesters outside the house, and I pulled my gun, and I asked them to leave,” she continued.

However, according to the activists, the home is equipped with several security cameras, which should have made it clear that nonviolent protesters were outside the home.

During the Monday news conference, Lacey also said that the activists were trying to “embarass” and “intimidate” her and that she had received death threats.

“I am grateful, however, for this challenge, because I had no idea how strong I was until I got ready to come down here. And sometimes it takes challenges like this for you to realize what you are made of — who you are as a human being,” Lacey said, adding that her husband was “profoundly sorry” for his actions.

"His response was in fear, and now that he realizes what happened, he wanted for me to say to the protesters, the person he showed the gun to, that he was sorry, that he's profoundly sorry, that he meant no one any harm," Lacey told reporters, NBC News reported.