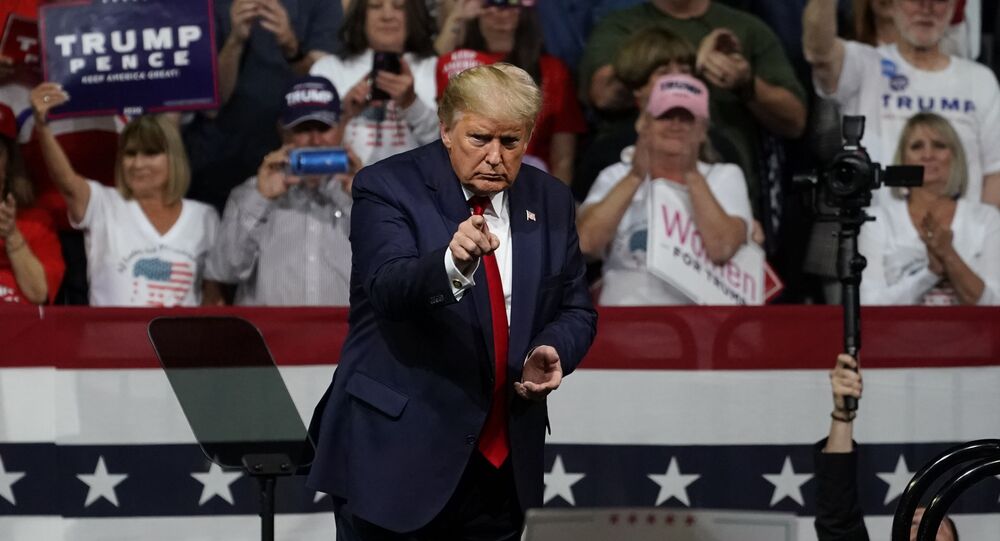 Want Trump to Advertise Your Business? If You’re Latino, All You Need is a Specific Hat and a Camera

The owners of a Mexican restaurant in Arizona have earned a five-star review from Donald Trump after their endorsement of the US President led his detractors to leave some nasty feedback for their business.

Donald Trump has promoted Sammy’s Mexican Grill, an Arizona restaurant, to an audience of 73 million after its owners were criticised for attending his rally.

“The food is GREAT at Sammy’s Mexican Grill in Phoenix, Arizona,” Trump tweeted on Sunday.  “Congratulations to Betty & Jorge Rivas on doing such a wonderful job. I will try hard to stop by the next time I am in Phoenix. Support Sammy’s!”

The impromptu ad wasn’t without a blunder: there is no restaurant with this name in Phoenix. Trump was apparently referring to the one in Catalina, some 180 km away from the state capital.

The married couple who have owned the Catalina business since 1996, Jorge and Betty Rivas, started receiving negative comments, reviews and even phone calls after they were spotted in the VIP area at the Trump rally in Phoenix on 19 February.

This week, someone posted a screenshot from the event on Facebook that showed Betty looking on from behind the President, wearing a red cowboy hat reading, “Latinos Love Trump”. Jorge is from El Salvador and Betty is from Mexico; both are naturalised as US citizens.

According to the Arizona Daily Star, that post attracted more than 230 comments, mostly negative, with the backlash moving on to the restaurant’s social media accounts including Yelp and Google reviews.

In a video on Sammy’s restaurant’s Facebook page, Jorge said: “Just because we are Latinos, it doesn't mean that we have to feel like every other Latino in this country. We are individuals, and we feel that we have the constitutional right to meet and support whoever we want.”

“You’re wasting your time,” he added. “Please, do something else with your time, like going to educate yourself. Do something for your family, and stop harassing us. I think it just shows that you are not very smart.”

Both restaurateurs wore Trump hats in the video, with pro-Trump banners pinned to the wall behind them. “Of course, he will win again – landslide,” Jorge concluded as Betty said, “Trump 2020” with a thumbs up.

This wasn’t their first interaction with Donald Trump: in March 2016, Betty Rivas shared the stage with Trump and held up a “Latinos support Trump” sign at his campaign rally in nearby Tucson. After that event, Betty said, they experienced a similar backlash.

Trump, who has long rallied against illegal immigrants from Latin America, is expected to get about 30 percent of the Hispanic votes in the November election, compared with 28 percent in 2016. Republicans stress that their anti-immigration stance is specifically directed against those who enter the country through illegal channels, rather than anti-Hispanic bigotry.