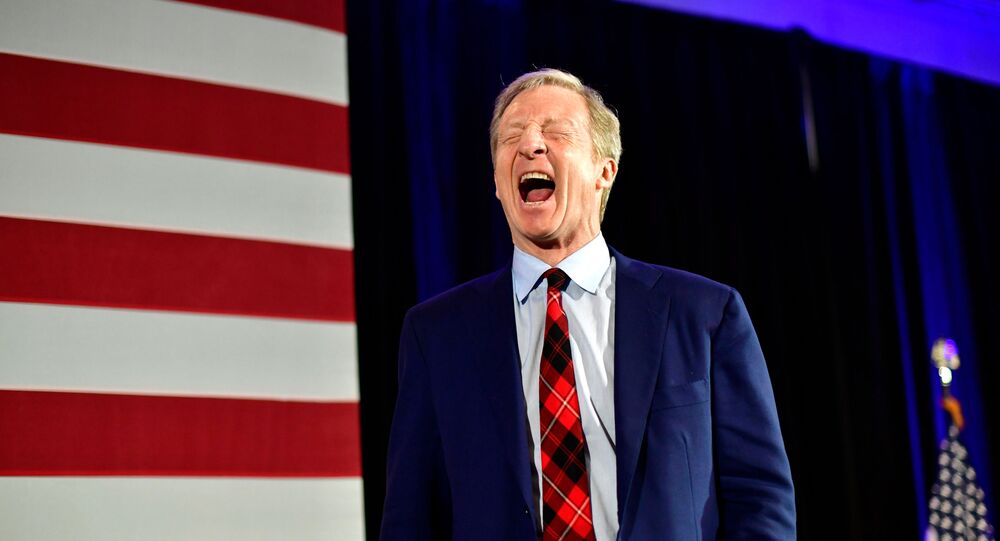 The Saturday Democratic primary in South Carolina resulting in a sweeping victory for former Vice President Joe Biden who is on track to secure at least 20 delegates, according to Edison Research.

Tom Steyer, a billionaire activist who poured over $20 million into South Carolina TV ads, ended his campaign on Saturday after primary results were announced.

Steyer, 62, whose presidential campaign targeted South Carolina's black voters by criticizing inequality in the US that he claims is rooted in racism, failed to surpass ex-vice president Joe Biden and Vermont Senator Bernie Sanders.

"We were disappointed with where we came out," Steyer said in a speech to supporters.

"I said if I didn't see a path to winning I'd suspend my campaign," he said. "And I can't see a path where I can win the presidency."

The activist noted that he joined the 2020 presidential run to fight for racial justice in the US, adding that he will keep up his struggle.

"I'm not leaving. We are already working to figuring out ways to make sure that we stay in South Carolina.''

Steyer, a former hedge fund manager born in New York City, had fueled speculations of a White House run well before his official announcement in July 2019, funding the ‘Need to Impeach’ group advocating for the removal of US President Donald Trump from office.

After joining the race, Steyer spent an eye-watering $200 million on TV and digital ads but came in fifth in Nevada and third in South Carolina.

According to Forbes, Steyer has gleaned some $1.6 billion from his investment firm Farallon Capital Management and while working as a partner at the San Francisco private equity firm Hellman & Friedman.