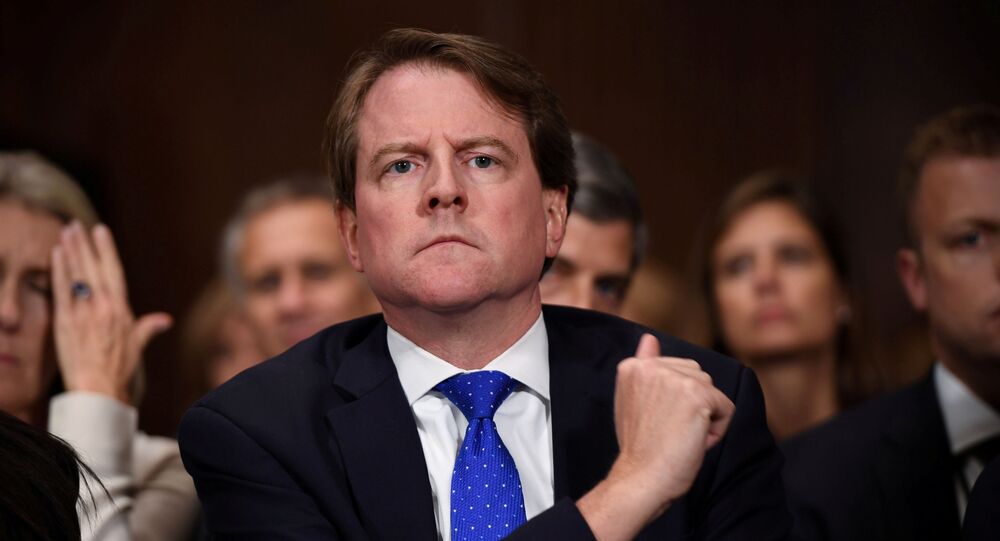 In November 2019, the ex-Trump administration lawyer appealed a court ruling ordering him to honor a subpoena and appear before the Democratic-controlled House of Representatives Intelligence Committee as it sought evidence to impeach US President Donald Trump.

The US Court of Appeals for the District of Columbia, Washington DC, on Friday ordered the House of Representatives to drop its legal action to force impeachment testimony from former White House counsel Don McGahn.

"The DC Circuit has ordered the House lawsuit to compel former White House Counsel Don McGahn's testimony be dismissed, agreeing with DOJ [Department of Justice] that Article III of the Constitution forbids the court from resolving the interbranch information dispute," court documents said.

House Democrats can still ask the full appeals court to weigh in or appeal to the US Supreme Court.

The House Judiciary Committee first issued a subpoena to McGahn in a bid to examine what at the time was alleged to be an obstruction of justice by Trump during special counsel Robert Mueller's Russia investigation. The president ordered McGahn to disobey the congressional subpoena to testify.

Last summer, the House of Representatives passed a resolution that authorized the Judiciary Committee to launch court proceedings against McGahn over his decision to decline a congressional subpoena to testify.

The court first ruled that the former WH counsel must comply with the subpoena. Later the US Justice Department filed an appeal on behalf of the White House.

Although Trump was impeached by the US House of Representatives on 18 December, 2019 - the 3rd US president in history to be impeached - the US Senate on February 5 subsequently voted to allow him to retain his tenancy in the White House.

Nadler Says All Options on Table When Asked About Trump Impeachment