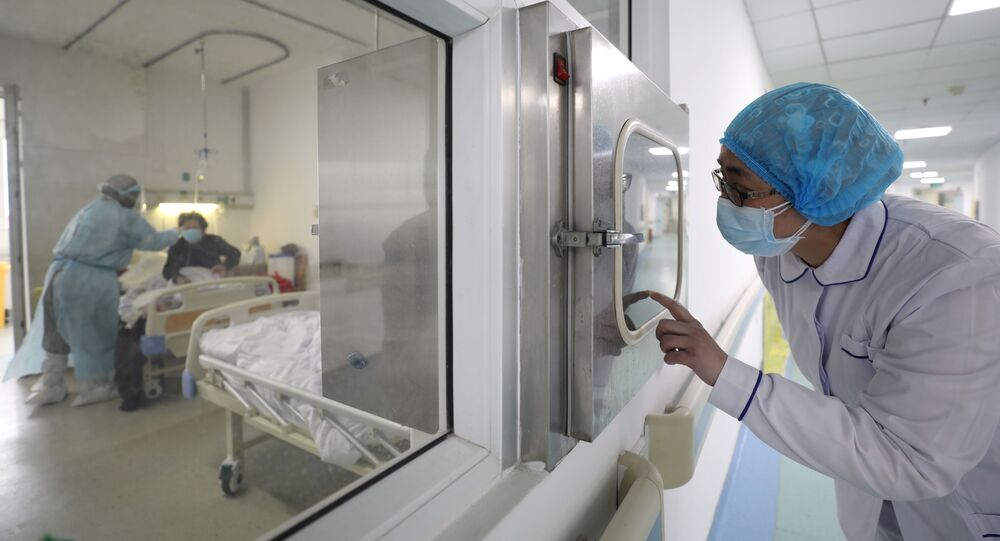 A senior US Department of Health and Human Services (HHS) official has revealed that more than a dozen HHS workers who assisted the first Americans evacuated from Wuhan, China, where the COVID-19 coronavirus first broke out, did not wear proper protective gear or receive appropriate training for infection control before doing so.

A redacted copy of the whistleblower’s complaint, filed Wednesday with the Office of Special Counsel, was obtained by the Washington Post.

According to the lawyers for the whistleblower, who oversees employees at the Administration for Children and Families (ACF) within the HHS, the two teams of ACF personnel sent to two California bases - one to March Air Force Base from January 28 to January 31 and the other to Travis Air Force Base from February 2 to February 7 - to retrieve the evacuees did not show signs of being infected with COVID-19, but were also not tested for the virus. The complaint also states that workers had contact with infected evacuees on multiple occasions.

“Appropriate steps were not taken to quarantine, monitor, or test [the workers] during their deployment and upon their return home,” the complaint reads, the Post reported. After their deployments, some personnel even took commercial airline flights to return to their normal workplaces.

“Our client was concerned that ACF staff - who were potentially exposed to the coronavirus - were allowed to leave quarantined areas and return to their communities, where they may have spread the coronavirus to others,” Lauren Naylor, one of the whistleblower’s lawyers, is quoted as saying to the Post.

The whistleblower is currently also seeking federal protection because she believes she was “unfairly and improperly reassigned after raising concerns about the safety of these workers to HHS officials,” the Post reported. She was also told on February 19 that she will be fired if she does not accept her reassignment by March 5.

In a statement obtained by the Post, HHS spokesperson Caitlin Oakley said: “We take all whistleblower complaints very seriously and are providing the complainant all appropriate protections under the Whistleblower Protection Act. We are evaluating the complaint and have nothing further to add at this time.”

According to Dr. Saskia Popescu, an infection prevention epidemiologist whose research focuses on the poor utilization of infection prevention and control within the United States, there is already a shortage of personal protective equipment (PPE) in the US due to the flu epidemic. Such shortages are alarming, especially because US Centers for Disease Control and Prevention (CDC) on Tuesday revealed that the US government and public health officials in the country are “implementing aggressive measures to slow and contain transmission of COVID-19 in the United States” amid a potential US outbreak.

“First and foremost, we’re in the middle of a pretty severe flu season, which means that hospitals are already quite strained in terms of a high census and stressed health care workers. But on top of it now we are starting to see personal protective equipment shortages related to the international coronavirus outbreak, and that is putting a stress on mask supplies. So all of those things are compounding right now when we are starting to see potentially even more cases in the US,” Popescu told Radio Sputnik’s Loud & Clear hosts John Kiriakou and Brian Becker on Thursday.

Earlier this month, Popescu published an article titled, “If the coronavirus outbreak grows, can a strained US health care system keep up?” on the Bulletin of the Atomic Scientists’ website. The Bulletin is a nonprofit organization focused on science and global security issues.

“That [the article] really looked at the special pathogen-tiered approach in the US. And the reason that’s concerning is because after [the Ebola outbreak] in 2014, the CDC worked with a couple of other agencies to develop a hospital preparedness program that would mean we would supply and fund certain hospitals through bio-containment units. So, we would build tiers - meaning you’d have your front-line hospitals, your assessment hospitals and treatment facilities that had enhanced capabilities to care for patients with something like Ebola - and that really helped prepare the US for more cases of something like Ebola, a special pathogen,” Popescu explained.

“But the concerning part is that it’s all but set to expire in terms of funding. So we are looking now at potentially only having 10 regional treatment facilities for special pathogens, which signals very much that perhaps we don’t view infectious disease healthcare and preparedness as a priority in the US,” she noted.

Senate Democrats on Wednesday requested that Congress allocate $8.5 billion to help contain the novel coronavirus. That request came after US President Donald Trump’s administration asked Congress to allocate $1.25 billion in emergency funds to respond to the coronavirus on Monday.

“Well, originally he had made the request for $1.25 billion, which is definitely not enough. Eight billion is much more likely what we’ll need, but the reality of it, so much of it depends on if we’re going to see widespread transmission in the US, because that gets trickled down to the CDC and to National Institute of Health [NIH], public health and social services emergencies. So, there’s a lot of agencies that that funding hits, and ultimately, they need it. We need it for testing capabilities, for public health response to really beef up those efforts because unfortunately, this is an international issue. Public health and health care preparedness tends to only get attention and funding during emergencies, and then we have a bad habit of when things get better, those resources really wane. So, that $8.5 billion is definitely necessary, but a lot of it is also using it and sustaining it after the outbreak dies down,” Popescu told Sputnik.

As to whether the coronavirus could turn into a pandemic, it’s hard to say, Popescu explained.

“I think there’s been a lot of question and concern if this is going to be something like the 1918 flu pandemic, and the truth is that we are in such a different time in terms of information sharing and media coverage.,” she said. “So inherently this outbreak will always be different and is always going to be historical, because it’s a big learning lesson in terms of seeing China use quarantine efforts for millions of people - that is a historic event. So, I think it’s hard to gauge if this is going to be one of those massive, life-altering things, because every outbreak is so unique and does change things.”

“But ultimately for the US, I really think it’s been a big lesson, and we have to really stop cutting budgets for the CDC and the NIH and having key gaps in administrative roles for global health security and then wonder, when those things happen, why there are delays in response and communication. Right now, I think the biggest issue is transparency and communication from our public health and health care advocates and leaders,” Popescu noted.

In 2018, the CDC was forced to slash 80% of its efforts aimed at preventing global disease outbreaks because it was running out of funds.

“I think that's especially concerning. Not only because we are so reliant on the CDC and the programs that they have within them to respond and prepare for outbreaks like the novel coronavirus, but also the optics of that are always very concerning to me, because it nationally and internationally gives that impression of: ‘You know, what? This isn’t a big priority for us.’ When in reality, it is, and it should be,” Popescu added.