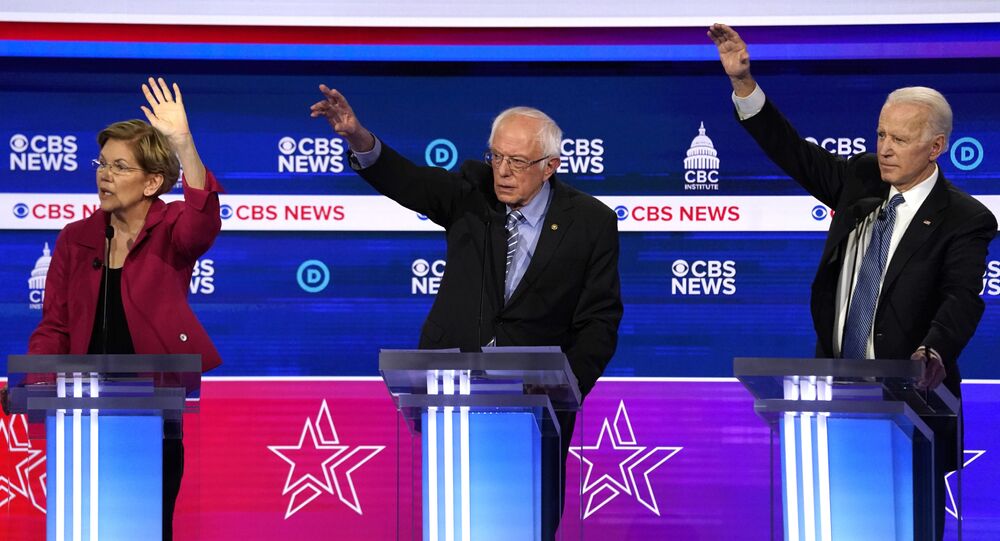 From ‘Kill It’ to Coronavirus Chaos: South Carolina Dem Debate in a Nutshell

South Carolina residents head to the polls on 29 February, with top-scoring Democratic candidates bracing for the crucial vote ahead of another primary milestone - Super Tuesday that will ultimately point to who leads the Democratic pack and challenge President Trump in November.

Tuesday’s debate in Charleston, the last Democratic verbal showdown before the crucial vote on Saturday, 29 February, was fraught with distinctively more chaos and yelling than last week in Las Vegas.

The Democratic contenders sounded less to the point with regard to outlining their own potential presidential policies, gladly opting to take turns hitting Bernie Sanders, the current Democratic frontrunner after winning two of the first three primary contests.

The most staunch criticism of the Vermont Senator came an hour and a half into the debate as his rivals zeroed in on his comments to "60 Minutes" about Fidel Castro and the current Cuban government.

"We're very opposed to the authoritarian nature of Cuba but, you know, it's unfair to simply say everything is bad. You know?” Sanders said, moving to bring up Castro’s “massive literacy programme”: “Is that a bad thing?” he queried.

The comment instantly attracted a backlash, which continued well into the latest debate.

Asked about those comments during the debate, Sanders said he was echoing President Obama’s narrative.

"Really? Literacy programmes are bad?" he said. "What Barack Obama said is they made great progress on education and healthcare".

Pete Buttitieg was one of the first to pick up on the reference, arguing Sanders was “making excuses", while Joe Biden struck back suggesting Obama’s point was different.

"The fact of the matter is [Obama] in fact does not, did not, has never embraced an authoritarian regime and does not now", Biden said. "This man said that in fact he did not condemn what they did".

Another point made by Bernie Sanders’ critics was what has been perceived as a shift in his vision of appropriate gun control policies.

Joe Biden took the lead pointing to Sanders’ decades-long record on gun control, invoking that he helped pass bills introducing national background checks and banned assault weapons for 10 years in the 1990s. He then directed a personalised attack against Sanders:

“But my friend to my right and others, in fact, also gave in to the gun manufacturers — absolute immunity … 150 million people have been killed since 2007, when Bernie voted to exempt the gun manufacturers from liability. More than all the wars, including Vietnam, from that point on. Carnage on our streets", Biden lamented, although failing to acknowledge Sanders’ recent shift to giving the issue top priority.

Sanders has of late backed all bills in Congress that would boost gun laws and emphasised that he’s backed an assault weapons ban for decades and will pursue stricter measures to tackle shootings. “I’m running for president because we must end the epidemic of gun violence in this country", he said introducing his presidential bid.

The coronavirus didn’t escape the talks either, with at least three candidates - Bernie Sanders, Amy Klobuchar, and Joe Biden - proposing measures to tackle the epidemic: injecting federal dollars into the Centres for Disease Control and Prevention and the National Institutes of Health, as well as boosting ties with other countries to ensure the global community can work jointly on the burning medical issue.

"Whether or not the issue is climate change, which is clearly a global crisis requiring international cooperation, or infectious diseases like coronavirus, requiring international cooperation, we have to work and expand the World Health Organisation, obviously we have to make sure the CDC, the NIH, our infectious departs are fully funded", Sanders said.

"This is a global problem. We've got to work with countries all over the world to stop it".

Biden, meanwhile, stuck to positioning himself as the only candidate on stage who has experience working to fight epidemics. During his tenure as vice president under Obama he dealt with the 2014 Ebola outbreak.

Elizabeth Warren meanwhile zeroed in on the staple of her presidential campaign: women’s rights. On stage, she recounted her experience of being allowed to hand over her teaching job while visibly pregnant to another colleague, finishing it off with an unexpected reference to what Mike Bloomberg had allegedly told a pregnant staffer.

“At least I didn’t have a boss who said to me, ‘Kill it', the way that Mayor Bloomberg is alleged to have said", Warren said.

Bloomberg previously denied the allegation, and he did again on Tuesday. “Never said that. Period. End of story", he said, trying to pivot the debate to New York City’s school system.

Warren didn’t stop at that however, proceeding to press Bloomberg on another women-related issue, and insisting he go further than releasing three women who complained about him from nondisclosure agreements.

“I don’t know what else she wants us to do", he said, visibly annoyed.

Russia Plays Over and Over in Bloomberg’s Mind

Sanders' claims about an intel briefing on Russia’s alleged involvement in his favour during the campaign, took centre stage again.

Bloomberg was the one to bring it up:

"Vladimir Putin thinks that Donald Trump should be president of the United States, and that's why Russia is helping you get elected, so you'll lose to him", the media magnate told Sanders.

"Hey, Mr Putin, if I'm president of the United States, trust me, you're not going to interfere in anymore American elections", the self-proclaimed democratic socialist remarked.

The allegations of Russia’s involvement in the US elections have long been vehemently denied by Moscow, with the latter this time calling them “paranoid reports” that it expects more of in the run-up to the November polls.

Bloomberg insisted vulnerable House Democrats further down the ballot would risk losing their seats if Sanders gets the Democratic nomination, and even had a revealing slip of the tongue in an attempt to refer to his political [read: financial] might:

"Let's just go on the record. They talked about 40 Democrats. Twenty-one of those were people that I spent $100 million to help elect", Bloomberg said. "All of the new Democrats that came in, put Nancy Pelosi in charge and gave the Congress the ability to control this president, I bought— I got them".

As many as 16 more votes across states loom large, with the next one in South Carolina this Saturday. The 3rd of March, or Super Tuesday, will see citizens across 15 different states go to the polls to pick their preferred Democratic candidate.