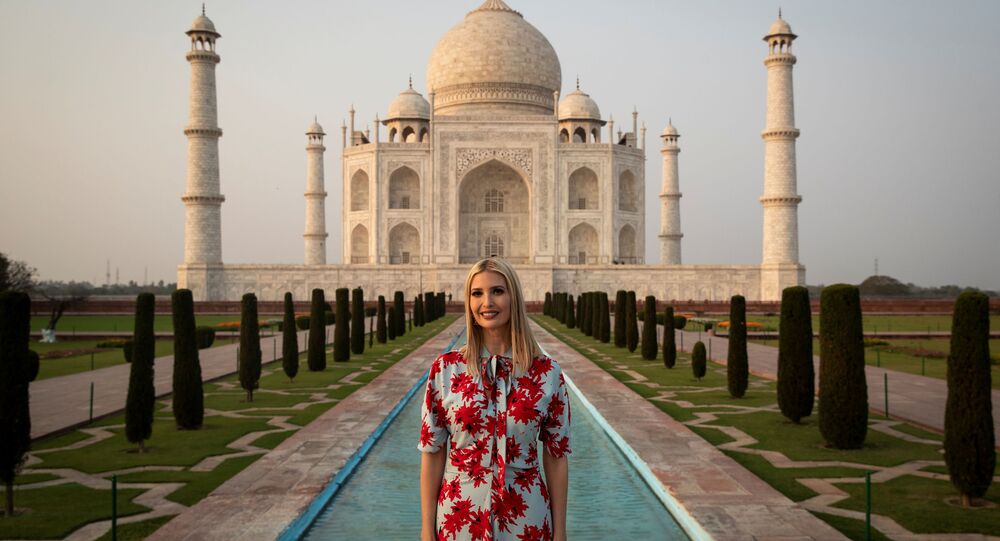 US President Donald Trump, along with members of his family, on 24-25 February conducted his first state visit to India. The tour included visiting places of historical significance, a handful of speeches and several diplomatic conclaves.

US President Donald Trump’s daughter and senior advisor, Ivanka Trump, is facing accusations that she had photos of herself taken in front of India’s Taj Mahal photoshopped, during the family’s recent two-day trip to India.

Ivanka Trump posted a series of photos of herself at the historical site on social media on Monday with the caption: “the grandeur and beauty of the Taj Mahal is awe inspiring!”.

The grandeur and beauty of the Taj Mahal is awe inspiring! 🇺🇸 🇮🇳 pic.twitter.com/jcYwXHxf4c

Slate magazine was the first to question the authenticity of Ivanka’s photos and question whether she had edited one or more images to make her look "thinner". The magazine’s staff reportedly noticed that an area near one of Ivanka’s arms “appears to be much more in focus than the water on either side of her”.

The media outlet suggested that it could be possible that someone “inserted or enlarged the gap in Ivanka’s picture” or somehow “messed around with the photo”, arguing that social media users often will, as a means of making themselves more appealing.

“But would Ivanka really go through such trouble for a single photo in a series that otherwise doesn’t seem to exhibit any telltale signs of photoshopping?,” the news outlet questioned.

Netizens did not rule out that the 38-year-old edited the photo.

“Check out the water between her waist and arm, it is a different colour and texture than the water elsewhere in the background,” another tweeted.

Hunter doesn’t photoshop his photos like Ivanka does, that makes her body look wonky and unnatural. She made her waist smaller. Check out the water between her waist and arm, it is a different colour and texture than the water elsewhere in the background. #PhotoshopBarbie

Some compared Ivanka and her husband, who appeared with her in some of the photos, pointing out differences.

Does he have a better Photoshop editor? Either blur the full pool background or sort out Ivanka’s waist/arm gap ... or we might think her waist has been modified ... 🤔

Ivanka: can some Photoshop guru please enhance this snap so it's as beautiful as I remember the moment?
Snarky PS guy: sure thing!

Someone with photoshop skills should do something with this to counter Ivanka’s tweet. pic.twitter.com/vuTSzYkLkp

Save money for CHIP - photoshop a cardboard cutout of Useless Ivanka's boring poses in tacky clothes instead of allowing the #TrumpGrifters to travel on taxpayer $$$ - you know, like the Flat Stanley kids' projects. An @IvankaTrump cardboard figure - no one would notice the diff.

Did they photo shop Melanie in where Ivanka was?

I once knew a girl who had photoshop on her phone and when she would take a selfie she'd photoshop it and then post it, Ivanka strikes me as someone who would do that.

Someone - please introduce Ivanka to Photoshop.

She could edit herself into glamour shots all over the world without wasting people’s time and imposing on us taxpayers.