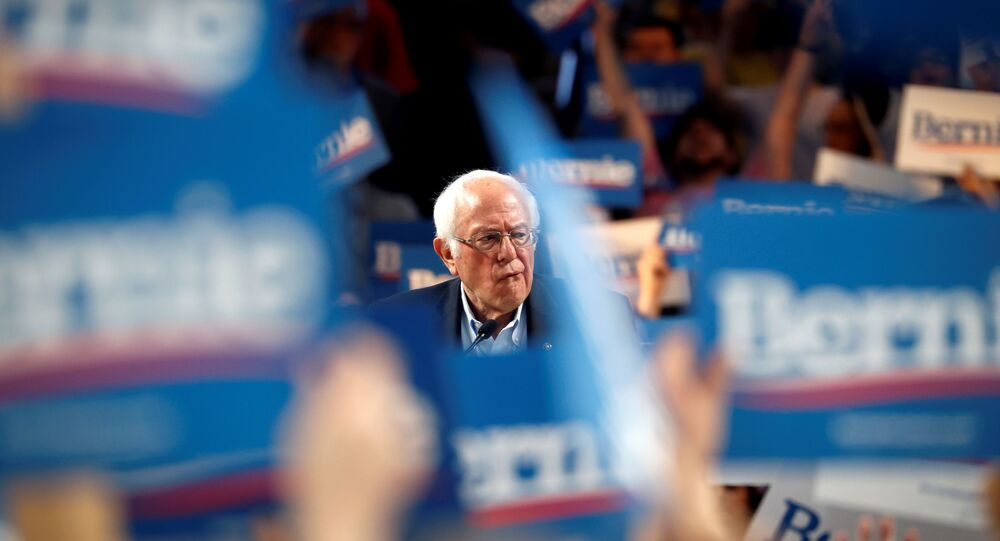 It maybe still too earlier to cast predictions, but Senator Bernie Sanders is currently emerging as a frontrunner for the 2020 Democratic presidential nomination following first three contests around the US. These clear triumphs stand in contrast to his 2016 bid and many are questioning what could have caused such a dramatic surge in support.

On 19 February 2016, Bernie Sanders lost the Nevada caucus to his Democratic contender Hillary Clinton by a tiny margin of 5% of county convention delegates, paving the way for his subsequent loss of the presidential nomination.

Fast forward four years and  the Vermont senator crushed the same caucus by winning a clear majority of 46.8% of county convention delegates, getting far ahead of Joe Biden with his 20.2%. It was Sanders’ third consecutive win in three previous contests for the Democratic presidential nomination, marking a clear leadership in the race.

As Sanders has been accumulating popularity not only among his traditional educated young and white Democratic support base, but also among Hispanic, black, middle-aged or those voters without college degrees, according to polls as well as the Nevada caucus, some suggest that this reflects some serious changes in Bernie’s 2020 presidential appeal from his older and less successful version.

Please Say No More On Inequality

Bernie Sanders had entered the 2016 presidential race pledging to fight “obscene levels” of income and wealth inequality, making this bid a cornerstone of his campaign. His planned fight against America’s richest included proposals to set a dramatic 52% tax rate on individual income for those earning more than $10 million, to cancel tax deductions benefiting corporations and hedge funds, as well as raising taxation on capital gains and dividends.

“This is a rigged economy, which works for the rich and the powerful, and is not working for ordinary Americans”, the senator said in 2015. “You know, this country just does not belong to a handful of billionaires”.

Although Sanders definitely retained his views and socialist inclination, he did spin them slightly around for his 2020 presidential bid. Sanders’ campaign website now firstly lists his proposals in relation to medicine, education and environmental policies, leaving his taxation plans far behind.

The senator still pledges to strengthen banking regulations, establish an annual tax on extreme wealth and thus “raise an estimated $4.35 trillion over the next decade and cut the wealth of billionaires in half over 15 years” in his programme, however it looks like he has moved along with global trends, having clearly prioritised the problems of climate change over angering the rich and powerful.

In 2015, the senator promised to release “very specific proposals” ahead of his campaign, concerning taxation and tuition-free college and university education, suggesting that he was the only candidate able to represent the vast “working” majority of the United States. In retrospective, many would disagree with this bold statement, arguing that Sanders’ 2016 presidential campaign was neither specific nor feasible, especially concerning his game-changing plans in relation to single-payer health care system and universal access to education.

Sanders was not eager to come under fire for his perceived vagueness again. On Monday, the senator released a checklist explaining how he would finance his ambitious plans.

While in 2016 Sanders suggested funding his brainchild Medicare for All through increased taxation on income-earners and households making $250,000 and more, this time he came up with a more detailed plan proposing an introduction of a 4% income tax on a substantial part of average American family’s income. The politician’s 2020 plan suggested that this would be just one among many “revenue options”, but potentially a primary one, which would help to generate $17.5 trillion to pay for his grandiose plans. Some have argued that despite Sanders managing to provide the details at last, some of his numbers still don’t add up very well.

In terms of funding his tuition-free-education initiative, the politician remained committed to his earlier agenda except for one detail. In 2016, he backtracked on his initial pledge of eliminating tuition at public colleges and universities for all students after Clinton’s attack during one of the debates, and as a compromise, has simply proposed to limit free education for those who needed it most.

In 2020, he went the whole way, insisting that all tuition fees should be eliminated, while the existing student debts cancelled. Previously his programme simply suggested lowering interest rates on the debts, but his new plans have definitely earned him news supporters among twenty-something base striving for education.  Sanders’ rising support among non-white can also be explained by one of his promises to annually invest $1.3 billion in “private, non-profit historically black colleges and universities and minority-serving institutions”.

“… if Donald Trump wants to send his grandchildren to public school, he has the right to do that. What we are saying today is public colleges and universities should be tuition-free and debt-free for all Americans,” Sanders said in June 2019.

And while this time around the general socialist agenda has not changed, it looks like the politician is now at least trying his best to pledge bolder and more concrete measures, while confirming his “your socialist guy” appeal.

Sanders has long been, what some would label, a climate change “alarmist”, who has insisted that the issue of global warming needed to be seriously addressed. His environmentalist agenda did not take a central stage in his 2016 campaign though, as the politician seemed to be more concerned with fighting for our planet’s economic rather than physical prosperity. However, as “green” became the new “black”, so did Bernie Sanders’ presidential appeal.

Fossil fuel CEOs want no federal regulations and billions of dollars in federal subsidies a year.

Our agenda is exactly the opposite: Kick Big Oil executives off of corporate welfare and regulate their planet-threatening carbon pollution out of existence. https://t.co/6oAK9xat5J

​The senator has pledged, if voted in of course, to fully switch US to renewable energy sources, promising to reduce emissions. He also has already taken a virtual swing at the sitting president and his “vision” of the economy, having claimed that he would rejoin the Paris Agreement.

© AP Photo / David J. Phillip
Is Mike Bloomberg Able to Trump Up the Dems?
And so far it looks like his “Green New Deal”, among other things, has already helped him to win popularity among the voters, especially the young ones, making him the most popular Democrat among the youth during the Nevada caucus, as well as earlier in New Hampshire.

While the “Green” wave is among many issues stipulating Sanders’ popularity among Democratic voters and confirming his lead in polls ahead of South Carolina and Super Tuesday primaries, the question still remains: can this all be enough to help the Vermont senator to secure his position as the the 2020 Democratic presidential candidate and emerge as a real challenger to Donald Trump?