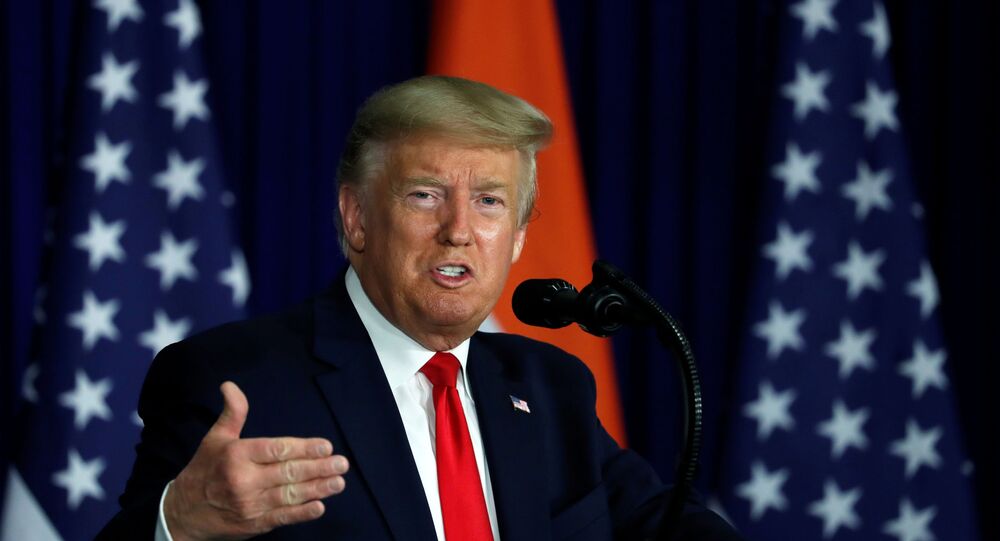 Earlier, US media reported that the country's intelligence community had informed some American lawmakers about alleged attempts by Russia to meddle in the 2020 presidential election, despite Moscow on numerous occasions denying such interference in US domestic affairs.

US President Donald Trump stated during his visit to India that American intelligence agencies have not briefed him on any information regarding alleged meddling attempts by Russia in the 2020 presidential election. He also suggested that the reports of Moscow's support for Democratic candidate Bernie Sanders might have been initiated by members of the Democratic Party, who want him to lose the primaries.

"Intelligence never told me anything about that, it was a strange thing that they went to Bernie […] Maybe they don’t want [Sanders], for obvious reasons. They don't want him so that they put out a thing that Russia is back at it", he said.

Trump opined that the information about the US intelligence allegations against Russia had been likely "leaked" and reiterated his previous claims that Democratic House congressman Adam Schiff might have been behind it. The president further said that he wants no help from any foreign country with his re-election and assured that he has never received any on earlier occasions.

Trump's allegations are in line with revelations published by WikiLeaks in the middle of the 2016 election race. The documents released by the whistleblowing website indicated internal Democratic Party bias towards Hillary Clinton and against Bernie Sanders, who eventually lost the 2016 primaries.

Back then the Democratic Party along with Clinton herself claimed that Trump's campaign conspired with Russia to hack the DNC servers for the information and leaked it via WikiLeaks. Moscow denied any sort of meddling in the US election and a subsequent two-year probe conducted by Special Counsel Robert Mueller showed that there had been no collusion between Trump's campaign and Russia.

Moscow also slammed recent reports of its alleged meddling in the 2020 election as "paranoid" and predicted that the number of such reports will only increase as election day draws closer.

On US Operations in the Middle East

The US president also boasted of his country's actions in the Middle East region saying that Washington "killed a bad daddy few months ago, we killed Soleimani", calling the latter the "king of roadside bombs". Iranian General and elite Quds Force commander Qasem Soleimani was indeed killed in a US airstrike on 3 January as he visited Iraq on a diplomatic mission. Washington claimed that Soleimani was planning attacks against US personnel in the region, but failed to provide proof.

© REUTERS / YURI GRIPAS
Trump Says Ready to Put His Name on US-Taliban Peace Deal
His killing resulted in a major deterioration in already strained relations between the US and Iran and has escalated tensions in the region resulting in numerous attacks on US military facilities in Iraq by local militia.

Trump also stated that Washington is planning to reduce its troop presence in Afghanistan down to 8,600 people. This comes against the backdrop of reports that the US has restarted negotiations with the Taliban on achieving a peace agreement, after a previous attempt failed in September 2019.