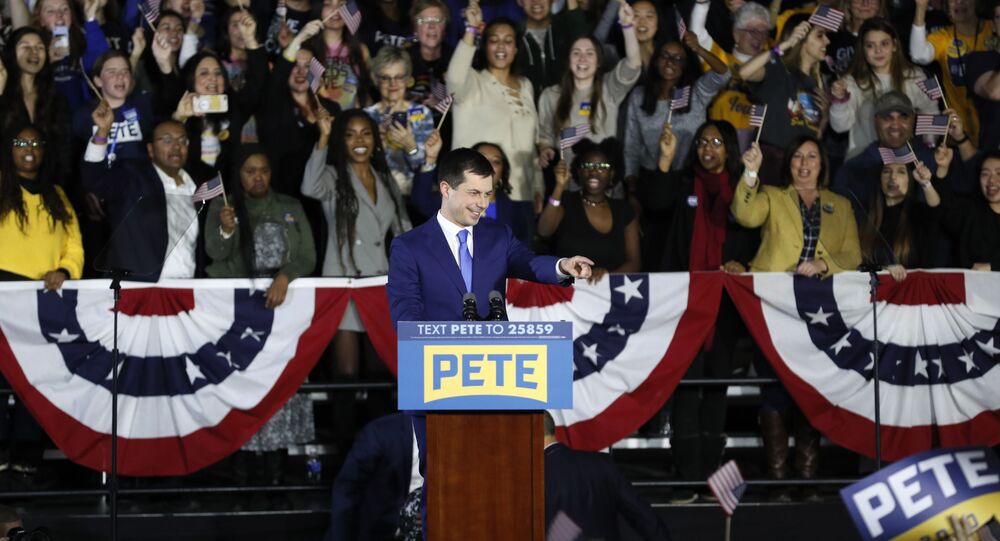 Buttigieg's campaign sent a letter to the Nevada State Democratic Party on Sunday, claiming that there are "material irregularities” in the process of counting early votes for the state’s caucus result.

The letter asked the Democratic party to "release early vote and in-person vote totals by precinct," "correct any outstanding second alignment errors identified by presidential campaigns, including ours" and "explain anomalies in the data," according to the letter first reported by CNN.

The letter comes as Buttigieg's campaign is struggling against Senator Bernie Sanders, who is in the lead with 50% of precincts reporting, and former Vice President Joe Biden at 19%. Buttigieg is in third so far with 15% and Senator Elizabeth Warren fourth with 10%.

Molly Forgey, communications director for the Nevada State Democratic Party, responded to the letter in a statement to CNN on Sunday.

"We laid out our early vote and Caucus Day processes step by step and we communicated these processes to all campaigns. We are continuing to verify and to report results," Forgey said. "We never indicated we would release a separate breakdown of early vote and in-person attendees by precinct and will not change our reporting process now. As laid out in our recount guidance, there is a formal method for requesting a challenge of results."

Hari Sevugan, Buttigieg's deputy campaign manager, said the campaign's data currently shows "that this is a razor-thin margin for second place in Nevada," meaning that while indicating any irregularities would not affect Sanders’ lead, they could determine who finishes second.

Buttigieg had already congratulated Sanders on the Nevada victory, yet once again cautioned against nominating Sanders as the Democratic presidential candidate for the November elections.

"I believe the best way to defeat Donald Trump and deliver for the American people is to broaden and galvanize the majority that supports us on the critical issues," Buttigieg said at his caucus day watch party. "Sen. Sanders believes in an inflexible ideological revolution that leaves out most Democrats, not to mention most Americans."

The complaint about irregularities comes after the Iowa caucuses showed inconsistencies with counting the results, undercutting the legitimacy of the caucus process. Nevada's process did not experience the same disorder that impacted the Iowa caucuses, as the Democratic party refused to use the mobile app that caused the delays in Iowa, yet even 24 hours after the caucuses began the final results remain unreported.

Can Warren Rise From Dust of Confusion in Nevada Debate?

Luck of the Draw: Card Games Settle the Winner at Nevada Caucuses – Video