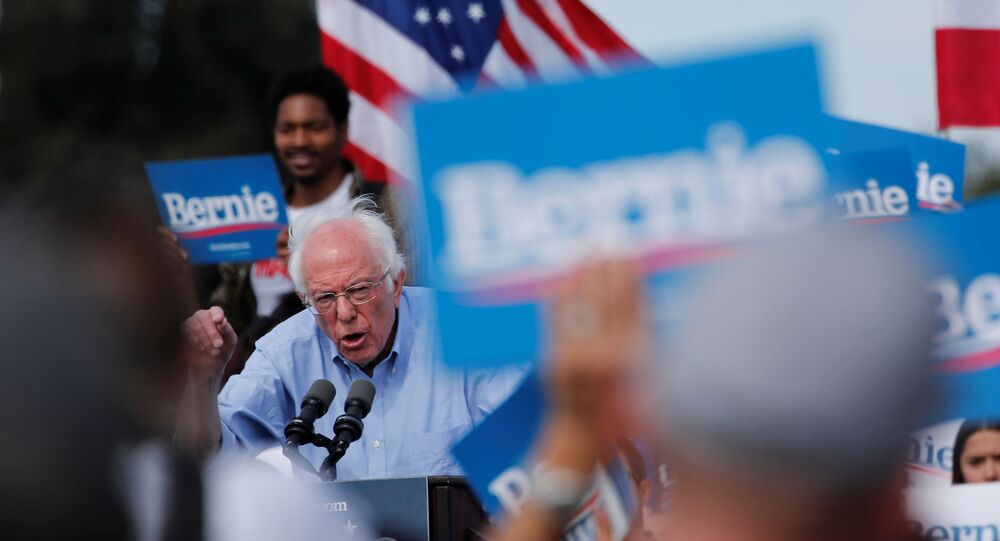 After a strong showing in the first two contests of the 2020 Democratic race - the Iowa caucuses and New Hampshire primary, self-proclaimed democratic socialist Senator Bernie Sanders has been shaping up as the new Democratic front-runner, with the potential to run against President Donald Trump.

Some Democrats are reportedly rattled by the possibility that Sen. Bernie Sanders, who registered to run as a Democrat and as an Independent in 2019 after parting ways with the party following his 2016 primaries defeat by Hillary Clinton, could win the Democratic nomination that would see him enter a final showdown with President Donald Trump, reports Fox News.

As Sanders was projected to win Saturday’s Nevada caucuses, furthering his lead over his Democratic rivals, individual representatives from the ranks of vulnerable, or freshman Democrats representing battleground states are believed to have concerns over how the Vermont Senator might match up against the current Commander-in-Chief.

Some Democrats are reportedly anxious that Bernie Sanders’ socialist bent might prevent him from winning over swing voters, such as those in rural areas, the upper Midwest and some of the more conservative-minded Democrats.

The outlet quotes one such freshman Democrat as saying:

“It’s bad… We are having conversations about how to deal with this.”

Another source, who suggested that a primary win by Bernie Sanders would see many voters leave the top of the ticket blank, was cited as expressing the dire prediction:

A Sanders nomination would almost certainly result in their states being snapped up by Donald Trump, as well as influence the ballot race for Democratic House and Senate candidates, two other Democrats apparently indicated.

“I think that [Sanders] can be challenging in parts of the country that we have to win in order to win the presidency,” Sen. Michael Bennet, D-Colo., was quoted as saying.

“We have to win Pennsylvania. [If] we lose there, it’s over.”

As for what possible measures might be taken by Democrats to offset the Sanders situation, lawmakers have not offered any specifics.

When asked if perhaps the Democrats would attempt to block Sanders, or try to “spin” things, one Democrat reportedly said an attempt might be made to accentuate local issues to enlist votes, but admitted it would be challenging to contend with the Sanders “narrative” and Trump impeachment aftershocks.

One House Democrat from a swing state reportedly tried to allay concerns, arguing that it didn’t matter who the Democratic nominee was, as voters in his state were prepared to support “anyone else”, even Sanders, besides President Trump.

Against the backdrop of "alarm bells" regarding a likely Sanders nomination, some democratic sources pointed out that the party had only apportioned a small percentage of delegates and there was enough time to mitigate matters.

“It’s still so early… We just have to win,” said one source.

House Speaker Nancy Pelosi, D-Calif., was reported as attempting to quell the swelling up anxiety, saying:

“I can hear you say 'Oh, we’re all in a panic. The establishment Democrats.' I’m like ‘Is there some establishment that I don’t know about around here?'”

“It’s a messy business. But this is so: we’re calm. We’re cool. We’re collected.”

Against the backdrop of VSanders’ projected 22 February victory in the Nevada caucuses, Democratic presidential candidate Pete Buttigieg, who is seeking to establish himself as Sanders’ chief rival, warned the Democrats against rushing to nominate the democratic socialist, suggesting this could prevent them from defeating President Trump.

“Senator Sanders believes in an inflexible, ideological revolution that leaves out most Democrats, not to mention most Americans... Before we rush to nominate Senator Sanders as our one shot to take on this president... let’s take a sober look at the consequences - for our party, for our values, and for those with the most at stake,” said Buttigieg.

Sanders sent out a series of tweets to celebrate his projected victory in the Nevada caucuses Saturday and urged his supporters to keep the momentum going.

We just won the Nevada caucus. This grassroots movement is unstoppable. Together, let's win the Democratic nomination, defeat Trump and transform the country! Join us live in San Antonio: https://t.co/XB1Ua14x8m

​Sanders, who’s making his second consecutive White House run, has been campaigning in San Antonio, Texas, ahead of the Super Tuesday contests.

He celebrated his Nevada triumph by touting "a multi-generational, multiracial coalition".

Sanders, whose popularity has been surging as evidenced by a new national Washington Post-ABC News poll which showed him leading by a huge margin, has now triumphed in two of the first three states to weigh in on the 2020 Democratic presidential nomination.

The Vermont Senator won a week and a half ago in the New Hampshire primary, and also won the popular vote total in the Iowa caucuses, but slightly trailed Pete Buttigieg in the delegate percentage after the Iowa Democratic Party announced the results of a recanvass of targeted precincts from the state's Democratic caucuses.

Buttigieg now leads Sanders by .08 state delegate equivalents, according to results posted by the state party, with 26.186 percent for Buttigieg to 26.182 percent for Sanders. The initial results were marred by apparent confusion due to reporting or mathematical errors.