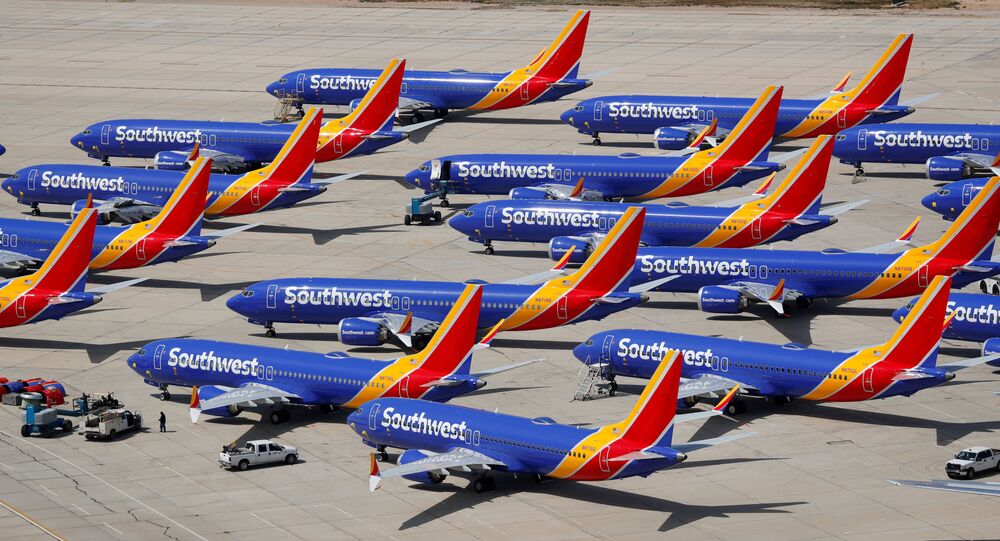 The Boeing 737 Max fleet has been grounded since 13 March 2019, after two crashes of this passenger plane killed a total of 346 people earlier that year and in 2018.

The New York Times has cited two unnamed sources as saying that federal prosecutors are investigating whether Boeing deliberately misled the Federal Aviation Administration (FAA) when the US aerospace company was seeking approval for its 737 MAX jetliner.

The sources claimed that the prosecutors are focusing, in particular, on whether Boeing top pilot Mark Forkner intentionally lied to the FAA about the nature of the Manoeuvring Characteristics Augmentation System (MCAS), a new flight control software system which is widely believed to have been part of the reason for two deadly Boeing 737 MAX crashes in the past couple of years.

In a series of internal messages that dated back to 2016 and became public in October 2019, Forkner told his colleague Patrik Gustavsson that he “basically lied to the regulators [unknowingly]".

The prosecutors are trying to determine whether Forkner, who had since left Boeing, “knew about a key change that allowed MCAS to trigger in almost all phases of flight and then did not give that information to the FAA,” according to the New York Times.

Forkner’s lawyers David Gerger and Matt Hennessy, in turn, insisted that their client had not misled the FAA because he was allegedly just reacting to the faulty operation of the MCAS.

“Mark didn’t lie to anyone. He did his job honestly, and his communications to the FAA were honest. As a pilot and Air Force vet, he would never jeopardize the safety of other pilots or their passengers. That is what any fair investigation would find”, the lawyers argued.

In an email to the FAA in 2016, Forkner reportedly asked the regulator “to delete” the MCAS because he claimed “it’s way outside the normal operating envelope”.

The FAA has yet to comment on the matter, while Boeing spokesman Gordon Johndroe said in a statement that the company is “cooperating with the Justice Department’s investigation”.

The developments followed Boeing coming under fresh criticism in January, when hundreds of internal correspondences revealed that the company had attempted to avoid regulatory scrutiny amid employees slamming the 737 MAX, the FAA and others.

This came after Boeing began recommending additional simulator training for 737 MAX pilots and a month after former CEO Dennis Muilenburg resigned from his post over his handling of the 737 MAX crisis.

All 737 MAX planes have been grounded since 13 March 2019, amid the fallout of two 737 MAX crashes which together claimed the lives of 346 people.

A Boeing 737 Max 8 plane operated by Ethiopian Airlines crashed on 10 March 2019 after taking off from Addis Ababa, Ethiopia, at around 8:30 a.m. local time, killing all 157 people on board. According to Ethiopian Airlines, contact with the plane was lost at 8:44 a.m., just a few minutes after it took off.

On 29 October 2018, a Lion Air-operated 737 Max 8 crashed into the Java Sea just minutes after taking off from the Indonesian capital of Jakarta. All 189 people on board were killed.