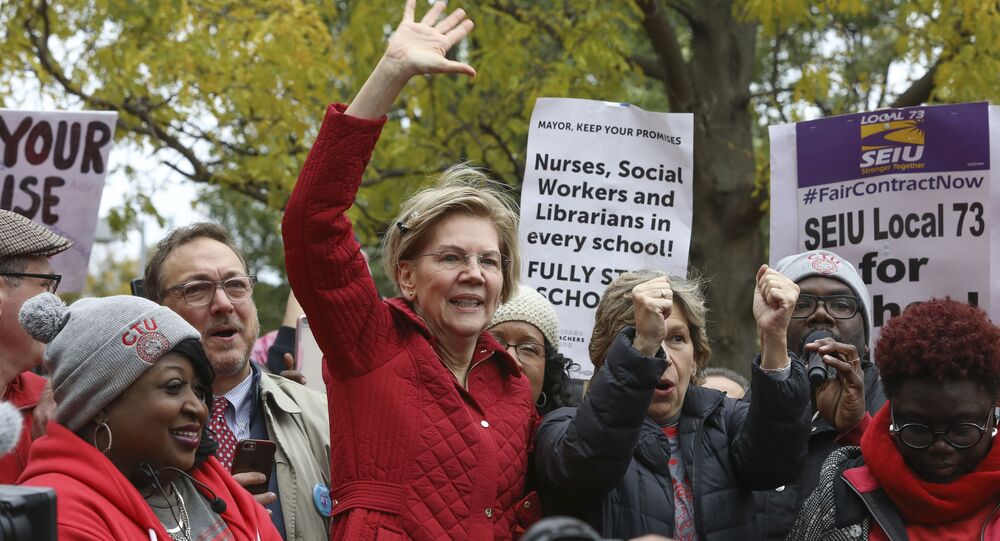 2020 Democratic candidate Senator Elizabeth Warren continued her campaign against her rival in the race for the nomination, billionaire Michael Bloomberg, vowing he will never win the nomination.

Speaking the day after the showdown in Las Vegas during which Warren repeatedly slammed Bloomberg over his treatment of women and his controversial policing practice of "stop-and-frisk" during his time as New York City’s mayor, she told supporters at a campaign field office that “you know what, last night was a lot of fun,” referring to her criticism of Bloomberg.

Warren called Bloomberg a disastrous nominee, dubbing him “the riskiest one for the Democrats” to choose in their effort to beat US President Donald Trump in November. She said that it was her aim to “make sure America got a little closer look at Mayor Bloomberg” during the Wednesday debate. She once more slammed Bloomberg, saying that billionaires “can call women fat broads and horse-face lesbians and then just when somebody complains, just throw a little money on it, and then put a gag in the woman's mouth. That's not right.”

Warren also blasted Bloomberg for a campaign memo the former mayor released hours before the debate that argued that moderate candidates former Vice President Joe Biden, former South Bend, Ind., Mayor Pete Buttigieg and Sen. Amy Klobuchar of Minnesota should drop out of the race in order for Bloomberg to consolidate the centrist wing of the party against surging progressive contender Sen. Bernie Sanders of Vermont, who has recently been leading in the polls.

“The Democrats are getting down to short strokes on how we’re going to pick a nominee. Now we all know Mayor Bloomberg’s view on this – everyone else should drop out and he’ll stay. He said Bernie could stay and he’ll take out Bernie. But other than that, just the two of them and the rest of us should go away,” she said, outlining that she was not ready to go away.

Bloomberg had spoken earlier about the debate during a campaign event in Utah. Although he didn’t mention Warren, he warned that “the real winner of the debate last night was Donald Trump. Because I worry that we may be on the way to nominating someone who cannot win in November. If we choose a candidate who appeals to a small base – like Senator Sanders – it will be a fatal error.”