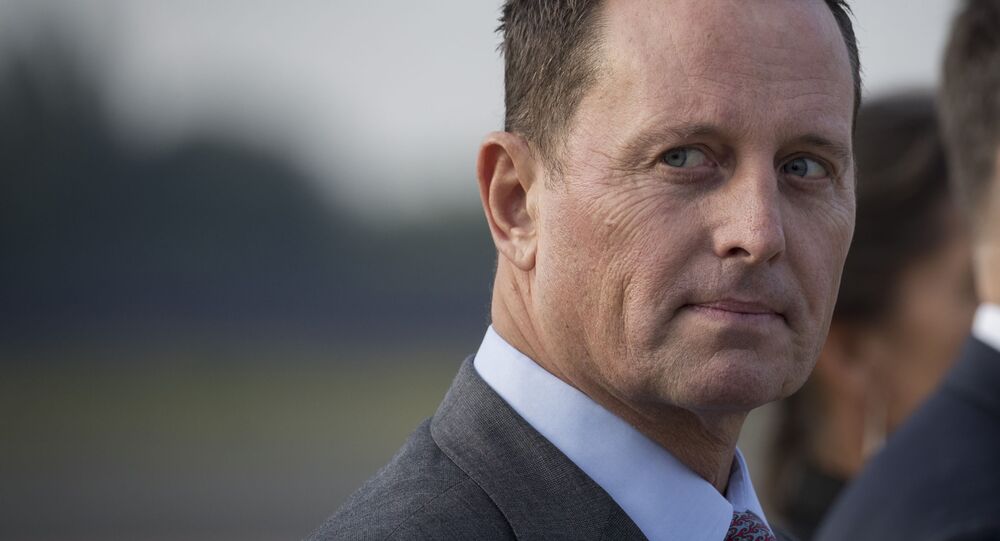 Meet Richard Grenell: What You Need to Know About New Acting Director of US National Intelligence

Grenell will replace Joseph Maguire, a retired US Navy admiral who was appointed last August. Maguire was at the centre of Donald Trump’s impeachment drama. He testified before Congress about a whistleblower complaint that sparked the impeachment. Although Maguire defended the whistleblower’s right he did not criticise president Trump.

Donald Trump’s decision to appoint US Ambassador to Germany Richard Grenell as the new Acting Director of National Intelligence has surprised intelligence officials. "He doesn’t have the kind of background and experience we would expect for such a critical position", said John Sipher, a former CIA officer.

Here are some other facts you need to know about the new acting Director of National Intelligence.

Athough his nomination raised questions regarding his background for a post in intelligence, Grenell has vast government experience. He served as communications director at the United Nations advising four US ambassadors on such issues as the US war on terror, Iran, North Korea, and US global peacekeeping missions. Prior to his post at the United Nations, he worked as a political adviser for prominent Republicans, including George Pataki and Dave Camp and was Mitt Romney’s foreign policy spokesman.

The 53-year-old does not mince words when it comes to promoting and defending US policies. This sometimes gets him in trouble. The day after he was sworn in as US ambassador to Germany Grenell demanded that Berlin adhere to the US strategy of maximum pressure on Iran and called on German companies doing business with Tehran to "wind down operations immediately". This and other tough statements did not earn him a lot of supporters among German officials and media outlets. Der Spiegel claimed that leaders of mainstream political parties and even Chancellor Merkel herself avoided meeting Grenell.

He is Loyal to President Trump

Perhaps too loyal. Grenell supports Trump’s strong-arm foreign policy and criticises the president’s opponents. Last month, he demanded that The Washington Post retract a story about Trump threatening to impose tariffs on European cars if EU leaders don’t adopt a hardline stance on Iran. The next day Germany’s defence minister confirmed that the story was true.

Grenell unconditionally supports Trump’s strategy on isolating Chinese telecom giant Huawei, his tough policy on Iran, and the president’s demand for NATO members to increase defence spending. He repeatedly criticised Angela Merkel for her “failed” open door immigration policy that resulted in hundreds of thousands of refugees flooding the country.

He Wants to Empower Conservatives

Following his nomination as US ambassador to Germany, Grenell said he was excited about the wave of conservatism that has hit Europe. "I absolutely want to empower other conservatives throughout Europe, other leaders. I think there is a groundswell of conservative policies that are taking hold because of the failed policies of the left", Grenell said in an interview with Breitbart. He stressed that issues pushed by conservatives improve the lives of ordinary working people and claimed that support for right-wing parties is massive.

He is a Cancer Survivor and Openly Gay

In 2013, Grenell revealed that he was diagnosed with non-Hodgkin’s lymphoma. Later that same year, he announced he was in remission. He is a vocal supporter for gay rights and is leading an initiative to decriminalise homosexuality around the world

He Keeps a Low Profile on Social Media

Unlike other public figures and politicians, Grenell keeps a low profile on social media. You could even be fooled into thinking that you've stumbled upon the Twitter page of some ordinary guy. On his userpic Grenell is wearing glasses and his caption to account reads :"I’m stronger after cancer. my dog runs my life. imperfect follower of Christ".