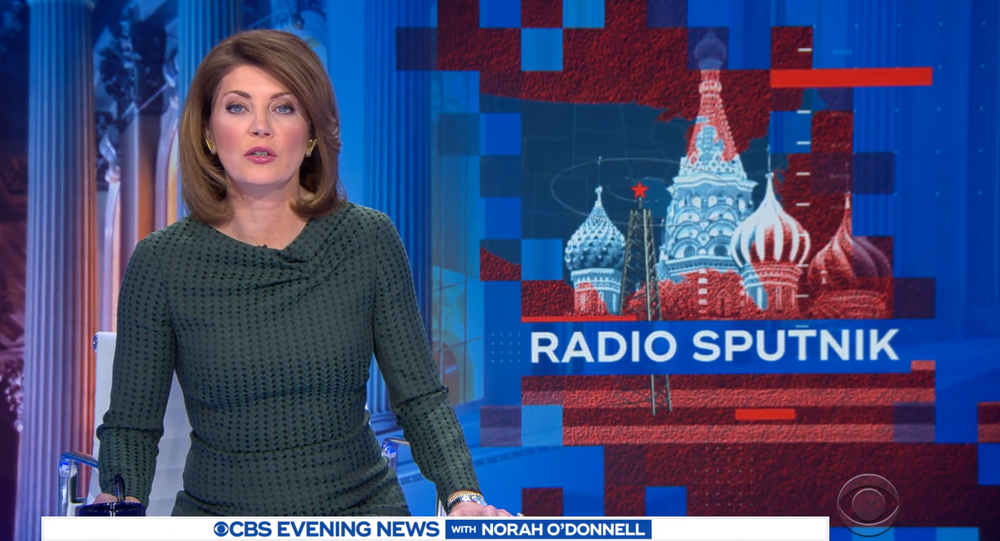 In a Monday segment regarding Radio Sputnik’s US broadcasts, CBS News recycled the same talking points and sources from every other outlet’s coverage without seeking Sputnik’s side of the story. While all too typical of the US corporate media, the biased reports just amplify popular demand for Sputnik’s elevation of unheard voices.

‘That’s What Normal Journalists Do’

The two-minute segment CBS aired Monday about Radio Sputnik’s broadcasts expanding into western Missouri hit the same notes as every other outlet’s coverage of the story, even citing the same sources.

"Borderline propaganda, straddle the fence treasonous, that's what this is to me," Kansas City community organizer Anita Dixon told CBS about Sputnik - just like she told the New York Times a few days earlier. CBS quoted the Kansas City Star’s story on Sputnik’s expansion, as well as RM Broadcasting owner Arnold Ferolito, and it focused exclusively on Radio Sputnik’s Fault Lines show and its co-host, Lee Stranahan, even using the same clip of Stranahan in Ray-bans and a blue gingham shirt introducing the show.

What CBS didn’t use is an interview or comment from any Sputnik journalist - not even the statement given them by Sputnik US Editor-in-Chief Mindia Gavasheli. Here is the statement CBS refused to air:

“CBS is a network whose president, Leslie Moonves, said that Donald Trump’s campaign ‘May not be good for America, but it’s damn good for CBS,’ revealing the true face of your propaganda organization. The fact that you didn’t bother to interview on camera any of Radio Sputnik’s journalists for a story about Radio Sputnik only proves my point.”

“It was, on its face, so absurd that they did a story about us without even talking to us,” Gavasheli told Radio Sputnik’s Fault Lines on Tuesday. “That’s what normal journalists would do. But these are not journalists, we know that: they are corporate propagandists.”

“It tells you a lot about CBS that they were so lazy, or unable to find another person who was outraged with what we broadcast in Kansas City, that they literally went to the very same person the New York Times interviewed.”

CBS is the latest news outlet to join the chorus of condemnation against Radio Sputnik and the US broadcasters who carry it across the airwaves. Its Monday evening segment comes in the wake of a dispute in Kansas City, Missouri, between the local station KXCL, which broadcasts Radio Sputnik for six hours a day, and a local National Public Radio (NPR) station upset about the new competition.

A New York Times article on Thursday presented Radio Sputnik’s content as “agitprop,” or “agitational propaganda,” claiming it was unpatriotic for American broadcasters to carry content that, according to them, “focuses on sowing doubt about Western governments and institutions.”

While Times writer Neil MacFarquhar agreed to a recorded conversation with Gavasheli, the story was selectively edited to omit parts where MacFarquhar agreed that the monolithic image of Russian media as nothing but Kremlin stenographers was a cartoonish caricature, and that the reality was very much in line with the attitude toward a free press in the rest of Europe. Since he did not, Sputnik chose to play the recording of their interview on Radio Sputnik’s Loud and Clear, as well as print it in a Thursday story.

This is more than NPR afforded Sputnik: writer Chris Haxel refused to interview a Sputnik journalist if it was recorded, claiming he didn’t have authorization, and he penned a pair of hit pieces that were short on facts and long on insinuations.

Gavasheli was contacted Friday morning via email by a CBS news associate, seeking comment on Radio Sputnik’s expansion to Kansas City; however, the email did not include any specific questions on the matter.

With no questions to answer, Gavasheli in turn responded with a statement of his own, seen above.

That was evidently not what CBS had in mind, as producer Andres Triay contacted Gavasheli less than 40 minutes later, noting via email he was seeking a comment on the expansion since the “issue is controversial.”

With Gavasheli doubling down that only a statement was requested by the outlet, it was only then that Triay opted to pose a few questions to the bureau chief, repeatedly stressing that the desired remarks would be based off the inquiries made regarding the station’s expansion to Kansas City.

However, CBS’ initial request had already been fulfilled. “Andres, I already gave you a statement based on your original request. Please, use it,” Gavasheli wrote. They did not.

‘A Critical Role’: Telling the Untold

“I do a show right here in Washington, DC, on Pacifica National, saying the exact same things that I say here, but they’re not called ‘Russian propaganda’ unless I’m here,” Fault Lines co-host Garland Nixon noted.

“Moreover, you go on Fox News regularly, and you say the same thing. Somehow it’s not scary and outrageous, even for Fox News,” Gavasheli noted.

Nixon also noted that hit pieces on Sputnik invariably focus on his co-host Stranahan, a former Trump supporter and former Breitbart correspondent. “I’m the invisible man,” Nixon said, noting he suspects it’s because he’s on the national board of directors of the American Civil Liberties Union and is a retired Maryland state police officer who worked on counterterrorism cases - an uncomfortable contradiction for those wishing to paint Sputnik as a threat to America.

Gavasheli said Sputnik’s plan for the future “is in our motto: ‘Telling the Untold.’ This is what we’ve been talking about. Most of these mainstream corporate media outlets, they wouldn’t even touch issues that we cover, so it’s a critical role to talk about things others either don’t want to or are too afraid to discuss.”

“Thanks to these mainstream attacks, people from other cities reach out to us and offer us broadcast in more places, so the only thing I have to say is, ‘Thank you very much.’”

The latest spotlight on Radio Sputnik’s airwaves comes as House Democrats criticized the Federal Communications Commission in a February 13 letter that emphasized that the agency had “failed to enforce its own rules as they apply to registered foreign agents.”

Sputnik was required by the FBI to register with the Department of Justice as a foreign agent under the Foreign Agents Registration Act (FARA) in February 2018, and RM Broadcasting, which carries Radio Sputnik in the Washington, DC, metropolitan area, was required to register under FARA that May.

‘Who is the Real Propaganda?’ NY Times ‘Selectively Edits’ to Push ‘Agitprop’ Narrative on Sputnik