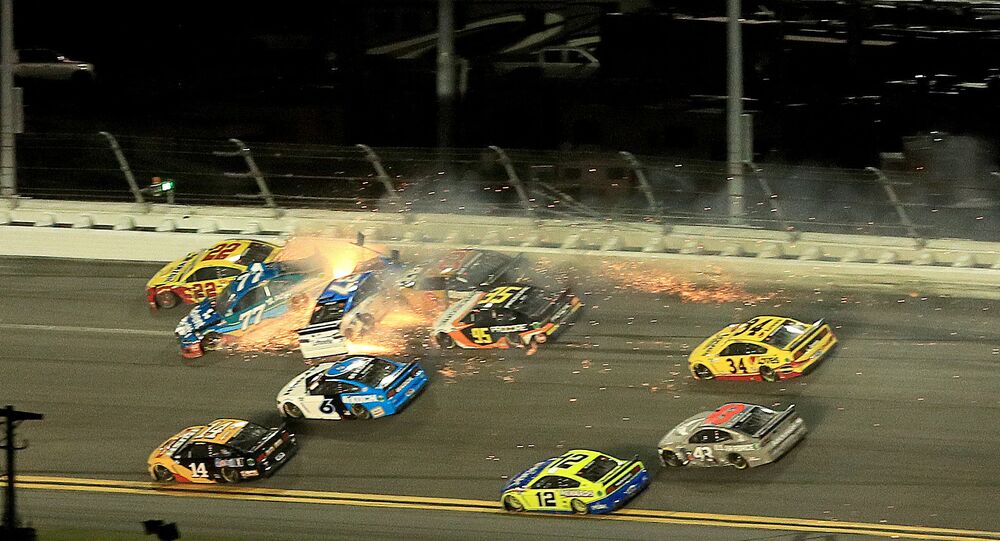 Hamlin and Newman were heading side by side towards the finish line when the latter tried to take the lead but unfortunately caught another car behind him and flipped over, rolling backward and getting hit by another vehicle.

Denny Hamlin has won the NASCAR Cup Series 62nd Annual Daytona 500, in which another racer Ryan Newman suffered a fiery accident, according to the official leaderboard results.

HAMLIN IS YOUR LEADER! #DAYTONA500

Videos shared on Twitter capture the moment Newman's car turned over on its roof and caught fire right at the finish line. The racer was taken to hospital, his condition remains unclear so far.

Here's the end of the Daytona 500 - Denny Hamlin wins his third but the real story is Ryan Newman, who ended up on his roof after a scary crash at the finish. pic.twitter.com/m4dSy1Jrvx

.@dennyhamlin is your winner for back to back years in the #Daytona500 but this @RyanJNewman crash is scary. pic.twitter.com/KrkHwKm5OI

Hamlin won the iconic race, that took place in Daytona Beach, Florida, for the third time in his career, according to NASCAR. The finish margin between Hamlin and Newman was the second-closest in race history - just 0.014.

This year's race was put off from Sunday till Monday due to rainy weather conditions, becoming the third Daytona 500 to be held on Presidents' Day, following similar races in 1959 and 1970.

Finish of the 2020 Daytona 500, hope everything is ok with Ryan Newman #DAYTONA500 pic.twitter.com/m9ewUfMSmj

The race was also marked by President Trump's presence, who became the second president ever after George W. Bush in 2004 to deliver the command for the contestants to start their engines and the first US leader ever to take a ride in the armored presidential limo, accompanied by the first lady.

Pres. Trump takes a lap in his presidential limo, "The Beast," at the Daytona 500.pic.twitter.com/Zjn3Tpsx7G

The Daytona 500, an annual 805-kilometre-long race (500 miles), has been the opening contest of the NASCAR Cup Series season since 1982. It has been held since 1959, on the same day the Daytona International Speedway was opened in Daytona beach.