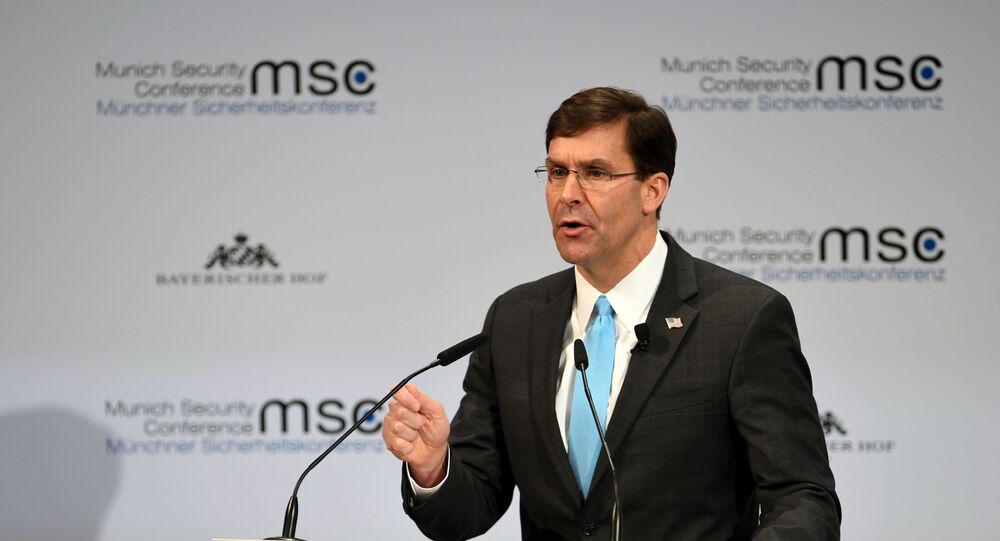 On Friday, the 56th Munich Security Conference (MSC) kicked off in Munich as over 800 delegates, including some 150 heads of state, prime ministers and ranking government members gathered to discuss regional and global security issues.

Esper, citing allegations by the Trump administration that the Chinese company shares all user data with intelligence agencies in Beijing, asserted that the intelligence-sharing partnership between Washington and US partners could be put at risk.

“Reliance on Chinese 5G vendors, for example, could render our partners’ critical systems vulnerable to disruption, manipulation, and espionage. It could also jeopardize our communication and intelligence sharing capabilities, and by extension, our alliances,” Esper said in his address at the conference.

The Trump-appointed official noted that the Pentagon is supporting US tech companies to develop indigenous 5G solutions, and called on allies to follow suit.

“In the long run, developing our own secure 5G networks will far outweigh any perceived gains from partnering with heavily subsidized Chinese providers that ultimately answer to Party leadership,” Esper suggested.

In late January, a number of US officials warned that, due to London's decision to allow Huawei to take part in the development of the nation's 5G network, a key intelligence-sharing agreement between the US and the United Kingdom could be reexamined.

In 2019, the US government blacklisted Huawei and its products and services over allegations that hardware and software developed by the Chinese multinational corporation was collaborating with intelligence agencies in Beijing, amid trade tensions between the two economic powers that began in January 2018.

Beijing has repeatedly denied the US allegations and the US has nonetheless continued to pressure Huawei, urging other nations to refrain from using the company's 5G equipment and technology.