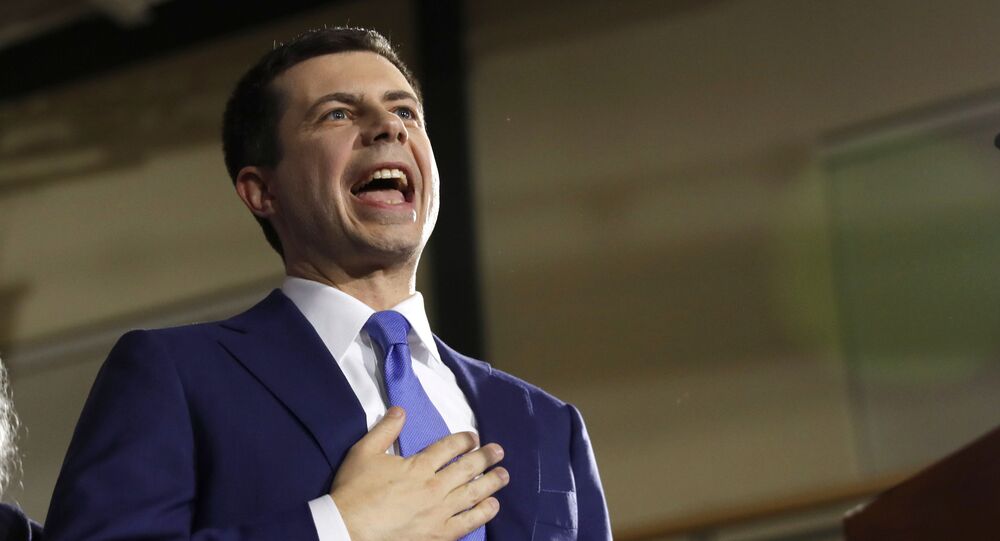 California, where more than one-tenth of national pledged delegates are at stake, is a key battleground in the Democratic primaries. Candidates are flocking to the Golden State to energise their base and raise money, and Pete Buttigieg has already received an unexpected reaction from those seen as his strongest supporters – the queer community.

Pete Buttigieg, the Democrats’ top-tier 2020 frontrunner, was met with LGBTQ protesters during his fundraiser at the National LGBTQ Center for the Arts in San Francisco on Friday.

Buttigieg, who is openly gay, received a question from the audience about his husband when he was interrupted by two activists. They were quickly shouted down and escorted out of the centre.

The two were part of the group Queers Against Pete, who were protesting outside the building chanting, “Hey Pete, come out, we’ve got some things to talk about!”

There were about a dozen activists at the scene, who held up banners reading, “People over corporations” and “Free college”.

One protester told a local news station: “Started this election really strong. He started by talking about medicare for all, later it became medicare for those who want it, and he changed his position after getting donations from the pharmaceutical companies. So, it’s really about accountability.”

White gay man at private @PeteButtigieg fundraiser accuses queer POC Bay Area students of being “against gay men” because we are asking his candidate to be better on #FreeCollegeForAll #MedicareForAll and #HomesGuarentee #queersagainstpete pic.twitter.com/BFiKA7RTR7

Buttigieg, the former mayor of South Bend, Indiana, is the first ever gay candidate to vie for a presidential nomination (barring long-running rumours around James Buchanan).

He runs as a middle-of-the-road liberal on a platform that includes a roll-back of Trump’s tax cuts for the wealthiest, universal background checks for gun-buyers, and a mixture of public health care and private insurance plans known as Medicare for All Who Want It.

However, Queers Against Pete have particularly criticised him for his support for increased military spending, opposition to free public college and cancellation of student loan debt, an unclear take on border deportations, and his ties with billionaire donors.

“Some have touted former South Bend Mayor Pete Buttigieg’s openly gay identity as proof of progress in our politics,” the group said in a statement on its website. “However, being gay is not enough to earn the support of LGBTQIA communities.”

“Mayor Pete is leaning on the support and actively courting the LGBTQIA community, but has shown time and time again that he is out of touch, not fit to be President of the United States, and simply falls short.”

Protesters arrive at a @PeteButtigieg event in San Francisco pic.twitter.com/YQFCzLQe64

Buttigieg, 38, has produced a strong showing in the first state contests, securing most delegates in New Hampshire (tied with Bernie Sanders) and in Iowa (the results will be recanvassed due to an error in the reporting app).

California is a key battleground state for the Democrats, awarding 415 out of 3,979 pledged delegates to the party national convention (compared with 33 from New Hampshire and 41 from Iowa).

Some of the latest projections put Sanders on course to win about a third of the vote; Buttigieg is expected to trail fourth, behind Biden and Bloomberg, with 13 percent of votes.