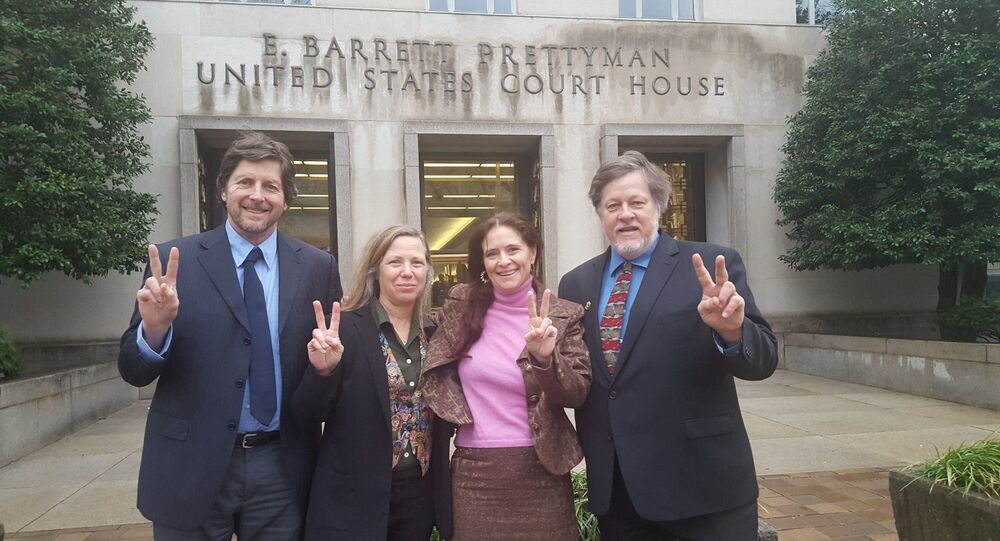 US judge Beryl Howell has declared a mistrial in the Embassy Protection Collective Four trial after the jury was unable to arrive at a verdict.

According to Sputnik sources, Judge Howell declared a mistrial Friday afternoon after the jury said it was unable to reach a verdict, even after being given more time to deliberate.

Breaking: A MISTRIAL was declared in the trial of 4 members of the Embassy Protection Collective! Even with a hostile judge, a ban on discussing international law, and the jury stacked against them, the prosecutors couldn't convince everyone that a crime was committed by the EPC!

​The quartet of activists - Adrienne Pine, David Paul, Kevin Zeese and Margaret Flowers - have been charged with "interfering with certain federal protective functions" - a euphemism for failing to vacate the Venezuelan Embassy in Washington, DC, so that the Trump administration could hand it over to Juan Guaido, Venezuela’s self-proclaimed “interim president.” They face a maximum sentence of a year in prison and a $100,000 fine.

The four activists were arrested by the Secret Service in a SWAT-style raid inside the Venezuelan Embassy in May 2019, which the activists have maintained was a violation of an international law that protects the inviolability of diplomatic facilities. The Venezuelan government stated repeatedly that the activists were their guests and were there legally, but they were arrested nonetheless, since Washington recognizes Guaido, not Nicolas Maduro, as Venezuela's head of state.

However, during the trial, Judge Howell refused to permit the defense to present such basic evidence, or even to state that Maduro is Venezuela's president and that he lives in the Miraflores Palace, where Venezuelan presidents reside. According to journalist Max Blumenthal, Howell indicated at several points during the trial that she believed it was within the purview of US President Donald Trump to decide who Venezuela's president is.

Sputnik sources indicated that when the jury first told the judge they could not reach a verdict, she directed them to continue their deliberations instead of declaring a hung jury. While Howell has called for a retrial, it's unclear when or even if that will occur.