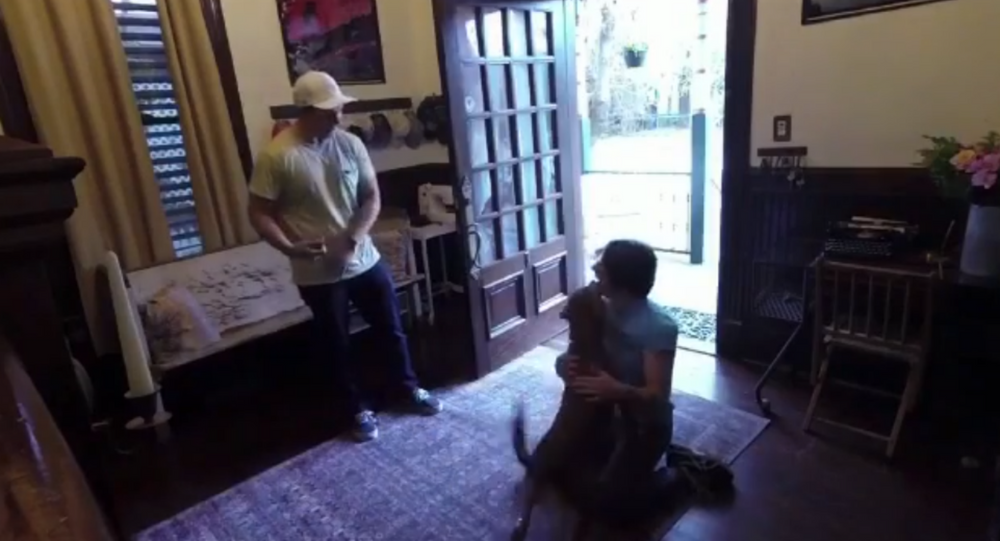 Being out in the cosmos and spending an extraordinary amount of time there is impressive, to say the least. So what is one of the first things a spacewalker does after coming back down to Earth? They reunite with their best animal friend, of course.

Christina Koch, an American astronaut from Houston, Texas, came back last week from a record-breaking space mission. Koch spent 328 days in outer space, the longest spaceflight in history by a woman.

Footage shared Thursday by the admirable rocketeer on Instagram captures the moment in which she returns to her home on Earth and is reunited with her dog, Sadie Lou. The faithful pup is shown standing on her back legs in front of the door, pawing at it incessantly, once having realized her beloved owner is returning after such a long while. As soon as Koch walks in, the elated canine is heard crying loudly and whining joyously.

Not sure who was more excited. Glad she remembers me after a year! That’s Sadie Lou, our LBD (little brown dog). Best breed for a best friend.

With her tail in rapid movement, the ecstatic pooch barks and jumps with joy while greeting her much-missed owner.

“Not sure who was more excited. Glad she remembers me after a year!” Koch wrote on the tear-jerking post, describing her sweet pup in the caption as “Sadie Lou, our LBD (little brown dog). Best breed for a best friend.”

According to NASA, Koch’s space mission concentrated mainly on biology, technology development and the quest for evidence of dark matter.

“After first launching into outer space on March 14, 2019, Koch returned to Earth Thursday, along with Soyuz Commander Alexander Skvortsov of the Russian space agency Roscosmos and Luca Parmitano of ESA (European Space Agency),” the space agency wrote on its website on February 6.

While at the International Space Station, Koch conducted six spacewalks and spent more than 42 hours in space outside of the station. This makes her unprecedented mission the second-longest spaceflight in NASA history. According to the Huffington Post, her time in space was just 12 days shy of the American spaceflight record, held by astronaut Scott Kelly.

US President Donald Trump took to Twitter on February 6 to laud Koch’s notable accomplishments in space, praising her for breaking the female record for the longest stay in space, writing that she is “inspiring young women and making the USA proud” and congratulating her for her part in the first all-female spacewalk in history.

Welcome back to Earth, @Astro_Christina, and congratulations on breaking the female record for the longest stay in space! You’re inspiring young women and making the USA proud! Enjoyed speaking with you and @Astro_Jessica on the first all-female spacewalk IN HISTORY last year.

A year certainly is a long time to wait, but it’s even longer in dog years. Now that is a loving and devoted pooch!