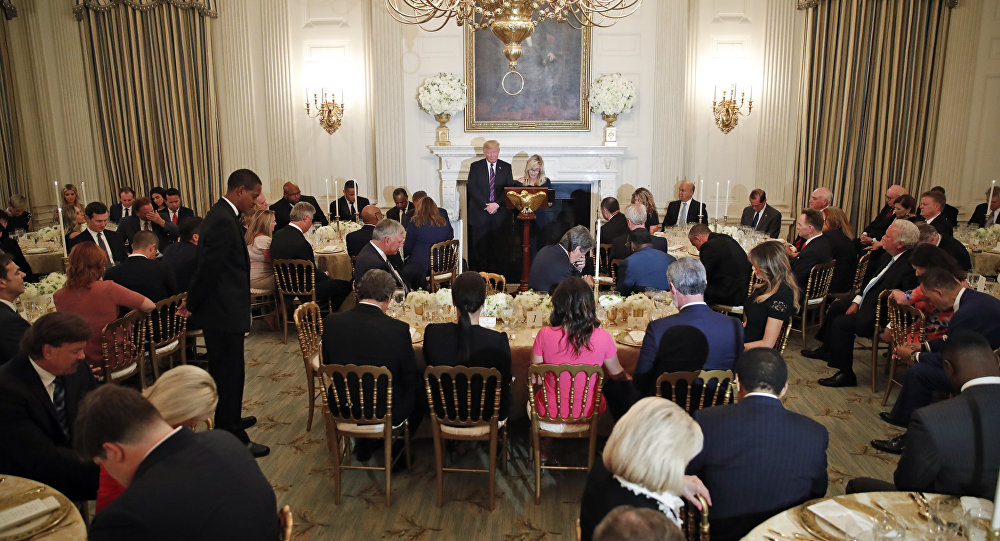 As US President Donald Trump's 2020 reelection campaign gets into full swing, he continues to appeal to the evangelical Christian demographic to secure GOP votes. Trump has previously lauded his self-described pro-religious record as president.

A video has emerged of a group of women praying over and touching US President Donald Trump during an unexpected appearance at their event in his Trump-branded Washington DC hotel on Wednesday.

The footage shows Trump surrounded by the group of about a dozen women with their heads bowed in prayer and their arms out, near or touching his shoulders.

"Father, we ask you that you protect him," the prayer-leader intones, continuing, "that you to lift him up, that you give him strength and know that he must be tired at times. And we just pray that you give him power like none other. We love him, we hold him up, and we thank you, Amen".

The group were unaware that Trump would visit their reception, according to Rachel Faulkner Brown, an anti-abortion activist and Atlanta-based spokeswoman for Be Still Ministries, who was in attendance.

Brown posted to Instagram about Trump's visit and made reference to the impromptu prayer.

The White House press office schedule for Wednesday said the president was at his branded hotel to deliver "remarks at a Fundraising Committee Reception", the Daily Mail reports.

Tonight I was in a room with the POTUS @realdonaldtrump and precious @paulamichellewhite sat at our table. I’m just not even sure what to say....but what I can say is ONLY JESUS and I am so so PROUD to BE AN AMERICAN. I always have been but this is next level and my freedoms as a ministry leader are being protected because this man is not afraid. We prayed tonight for @realdonaldtrump because we all need to be prayed for, we all need to be loved and we all will thrive in freedom. Hail to the Chief tonight.....WHAT A DAY! #ifyoudonthavelifeyoucanthaveliberty#vote#prolife

After arriving at the Trump hotel, the president spoke from a podium displaying the Trump Hotels brand, not the official presidential seal, a breach of presidential protocol, according to reports.

White boasted of her decades-long friendship with Trump, quipping that she and her family were hoping to pray together for "four more years".

Hand-picked by Trump, White joined the White House in October 2019, serving as his adviser to the Faith and Opportunity Initiative and overseeing outreach to Christian evangelical groups.

Trump is the first sitting president to attend a the anti-abortion group March for Life and has vocally praised his own record as being supportive of Christian evangelism and several other religions.